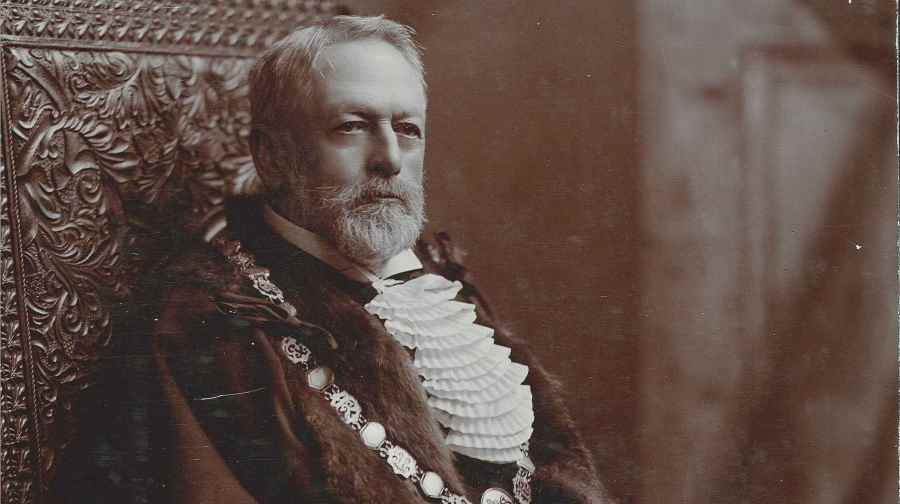 The first mayor of Bermondsey is about to get a long-awaited make-over after standing in all weathers for more than a hundred years.

The statue of Samuel Bourne Bevington in Tooley Street was erected in 1911, so by now the Grade II listed bronze memorial could do with some TLC, but who was the man behind the memorial?

Although considered a ‘man of the people’, well-loved by the working classes in the former Bermondsey Borough of the 1800s, Bevington was born into an eminent family associated with the founding of the Quaker movement.

William Bevington of Eatington was thrown into a Warwick jail for consorting with George Fox, the founder of the rebellious sect. His descendants moved to London in the eighteenth century and set up Bevington and Sons, the leather firm of the Neckinger Mills in Bermondsey.

Baby Samuel was born in 1832 and by the age of nineteen he had joined the family firm and went on to become a senior partner. In his 75 years he was a Colonel of the West Surrey Regiment, commanding 700 men, a Justice of the Peace, a member of numerous school boards and a Bermondsey librarian.

In November 1900 when the Bermondsey Borough Council was established, Bevington was unanimously elected to the post of first mayor of the borough, an honour which was renewed the following year.

This was surely because with his wealth and position he chose to try and help those less fortunate. He set up hot meals for poor families and better housing.

Bevington was a truly philanthropic gentleman whose faith was the cornerstone of his desire to better his community.

But his religious life holds some surprises. Although brought up and schooled in the Quaker tradition, Bevington went on to become a member of the New Church – based on the teachings of controversial Swedish inventor and philosopher, Emanuel Swedenborg.

The same portrait of Bevington which hung in the council chamber of Bermondsey Town Hall, also hangs in the headquarters of the Swedenborg Society in Bloomsbury, where Bevington was Chairman at the time of his death. The purpose of the society was to translate Swedenborg’s extensive commentaries on the bible from Latin into English and espouse his message to the masses.

Swedenborg was a capable and respected scientist in the 1700s often put on a parallel with Da Vinci for his inventions.

In 1745 he had a vision of Christ in a London pub and from then on claimed to be an instrument of God – intended to interpret the Bible.

Through 35 volumes of theological writings, Swedenborg hoped to bring the every-man closer to God, encouraging Christians to know the Lord through love and good deeds, rather than adhering to a set of strict rules set out by the Church.

However, he is also remembered for some of his more outlandish statements, including the claim that he had visited the afterlife on numerous occasions.

The great granddad of modern-day spiritualism, Swedenborg was considered a fantasist by some and an out-and-out loon by others so it may have been somewhat controversial for our mayor of Bermondsey to be a disciple of this new religion.

In 1897, Bevington and his wife gave a garden party for the annual meeting of the Camberwell ‘New Church’ which ten years later was still said to be living on “in the minds of many as a happy occasion.”, according to the New Church Magazine.

He read lessons at the New Church in Bromley and minutes show he was quite the evangelist of his faith at meetings held in Bermondsey at the Drill Hall he had built.

Colonel Bevington was driven by his belief that the good deeds you do in this life will save you in the next and following his death in 1907, it was clear his generosity of spirit had touched the hearts of the Bermondsey community.

At his packed out funeral Rev’d H.Lewis said: “Bermondsey has lost one from whom it had received much during his life; one whom they all delighted to know, and all felt the better for having been associated with him.” The internment then took place at Snodland where a New Church service for burial was read.

The following day, Rev’d E Murnane, of the Catholic Church in  Dockhead, made an unusually personal address from the pulpit when he said: “I must break through our customary silence to pay, in your name and my own, tribute of sympathy and gratitude to the memory of the late Colonel Bevington.

“In common with all the people of the borough we mourn the loss of one who to the end of a long and busy life set before us a high standard of civic life. He was a lesson and example to all, and especially to those who have wealth and position, how to fulfil our duties as citizens – a lesson much needed in our own day when men of wealth and position so often shirk their duties and responsibilities to the people and place where their wealth is made.”

Rev’d Murnane had first met Bevington some twenty years previous, when the factory boss had called a meeting to discuss the question of housing the poor and since then he had gone on to give his money and his time to every care of the working people of Bermondsey.

The Rev’d said:?“That he had touched and won the hearts of the people was shown by the wonderful spontaneous manifestation of popular sorrow at his death and funeral. It was creditable to the people of Bermondsey and a striking tribute to the character and life-long work of Colonel Bevington.”

The bronze statue of Bermondsey’s upper class hero of the working classes depicts the distinguished Colonel in all his mayoral grandeur and tells the story of his impact in a short inscription reading: “Erected by his fellow citizens.”

Colonel Samuel Bourne Bevington (1833-1907) was buried in Brookwood Cemetery, Woking, Surrey on 20 April 1907, having died in Torquay. His wife, Sarah Anne was buried in the same grave on 29 December 1926. If you have any doubts, I am sure that the Surrey History Centre in Woking would be able to confirm this as they have the burial records for the cemetery on microfilm. Also, I have actually seen his grave as I am a member of the Brookwood Cemetery Society! He is surrounded by other family members.