It was recorded that V1 bombs mainly fell in south London, because double agents captured by the Allies were feeding false information to Nazi missile teams in Calais, goading them away from important targets in central London, and towards less-vital targets south of the river 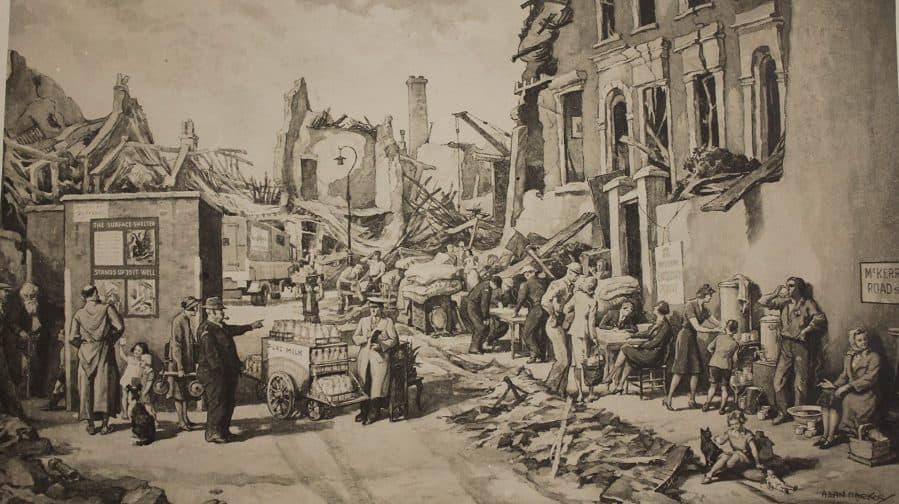 An artist's impression of the Corset Factory explosion in Nunhead Lane, 1944

Long after the Blitz was thought to have ended, and German air raids had ceased, areas south of the river continued to be pummelled by the Nazis using their infamous V1 missiles.

Peckham in particular became the inadvertent target for these missiles, launched from just across the channel, for a two-month spell in 1944.

The most destructive of these seemingly random attacks on the smoky suburban sprawl came on June 22, when a V1 “Doodlebug” cruise missile laid waste to the Savage’s corset factory, once located near the corner of Peckham Rye and Nunhead Lane.

Twenty-four mainly young girls in their late teens and early twenties lost their lives, marking it out as the largest loss of life in Peckham during WW2.

The corset factory disaster has been researched by Peckham Society chair, Dr Peter Frost, who can recall hearing from Ron Gain (his former colleague in dental practice and who lived in the Peckham Rye area) that Ron’s son had heard the air raid siren on the night of the bombing, and had a good view of the factory as the V1 struck. Peter also had memories, from when he was a youngster, of seeing the V1s going over his house and towards south London, when he lived in Ashford in Kent.

A diagram showing the working of the German V1 rockets, one of which was dropped on the Corset Factory

“There was absolute destruction of the building, and the tram tracks were broken and twisted up in the air,” Peter said.

“Initially the passers-by and the rescue crews could hear the staff singing, from an air raid shelter beneath the factory, to keep up their spirits. When eventually they were recovered they were all dead, probably having suffocated.”

His colleague, local architect Benny O’Looney, told the News that some 30 V1s fell on Peckham in the course of two months during 1944, killing 200 in all.

Six of them landed on Peckham Rye Park itself, and another was recorded as having fell on the current Morrisons carpark site near Rye Lane and Queen’s Road.

The corset factory, owned by a “well established” Peckham family called the Savages, had been used for manufacturing Thomson’s corsets sold in America, and Au Fait-branded lingerie.

But during the war it was acquired for manufacturing parachutes – with rows of sewing machines handled by the young women who perished in the attack.

By the 1950s it had been cleared, and made way for brick housing estates that still stand in Nunhead Lane today.

According to Peter, the reason for the missiles’ frequent encounters with such soft targets in south London, was because the Nazi missile operators in Calais were being fed false information by double agents working for the Allied forces.

German spies had been trying to provide their comrades across the Channel with coordinates for priority targets in central London, such as Buckingham Palace, by sending messages over radio signal in Morse Code.

But many of these spies were captured, having been eavesdropped on by agents working at Bletchley Park near Milton Keynes, where the famous Enigma Code was cracked.

The Nazi spies were given the choice of a hanging, or to work as double agents. Part of their new cover job was to send back coordinates to their colleagues operating the V1s that were instead for locations in south London, which were close enough to London to be believed, but a safe distance from the more valuable targets nearer the Thames.

Later on in the war, the Nazis progressed from using V1s, and which were propelled from across the channel in locations such as Belgium and Calais, and began using vertically-launched V2 rockets, which penetrated space. Such weapons were unprecedented at the time, and Peter suggested that some of the first V2 rocket explosions had been mistaken for gas explosions, because they had not been detected during their flight.

I was born in Dulwich hospital in 1943 to a family with lots of aunts uncles that lived in nunhead but as my dad was away working on airfield maintenance my mum and I moved to a farm in Essex to be with my dad. We moved back and ln to 15 selden SE 15 in 1945 and stayed till I was 21 and got married since then I would wonder why there was a lot of bombed debris between seldon road and gibbon road of which I played on a lot Roger