The "Eight Wonder of the World" was a very different place after dark. 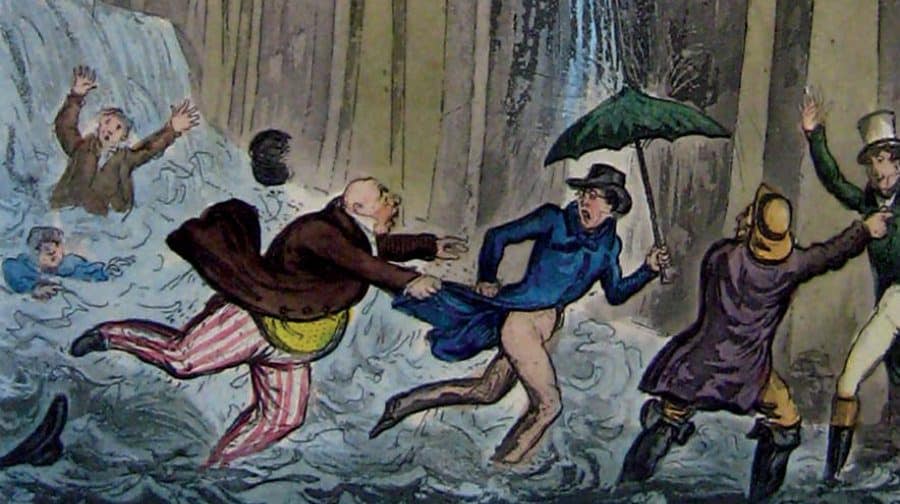 While it may seem strange today with our 270-station tube system, the so-called ‘Eighth Wonder of the World’ was once an underground tunnel from Rotherhithe to Wapping.

The Thames Tunnel, completed by Marc Isambard Brunel and his son Isambard Kingdom Brunel in 1843, was undeniably a feat of engineering for the time.

The entrance hall was built above ground and then ingeniously sunk into the bank of the Thames under its own weight, highlighting the logistical gymnastics required to build the world’s first underwater tunnel.

Visitors flocked to the tunnel after it opened, with 50,000 paying a penny apiece to walk through it on the first day. One million people – half the city’s population at the time – had paid to walk ‘the shining avenue to Wapping’ within three months, including Queen Victoria.

In July of that year Her Majesty made a trip ‘down under’, where a patriotic – or perhaps, entrepreneurial – Bermondsey trader laid down silk handkerchiefs upon the muddy floor for her to walk on.

It is said that for the rest of his life the cheeky stall holder made his living selling the hankies muddied by the Queen – although suspiciously it appears that his supply of dirty hankies was endless, with the boot prints upon them far too big for a woman.

“The Eight Wonder of the World”

But once the initial novelty wore off – and especially once the sun went down – the tunnel turned a little more sinister.

“Any self-respecting person wouldn’t be seem dead down there after dark,” Robert Hulse, director of the Brunel Museum, told the News.

“Because it was just a penny to enter, a lot of people would spend the night down there. Pickpockets, thieves, cutpurses, tricksters, conmen, prostitutes – they were all there.”

Many sick, homeless people would use the tunnel as a place to sleep, which quickly led to it being nicknamed ‘Hades Hotel’, after the Greek god of the underworld and death.

Robert said: “Because the poor, the unhealthy and the elderly would shelter in the tunnel, every morning it was somebody’s job to clear out the corpses.”

Even the living took on a deathly appearance, he added.

“The underground stallholders, who were mostly women, soon began to look like ghosts, or waifs. For a lot of them, they would get down in the tunnel to start work before the sun came up, and would work until after it set in the evening. They would not see any sunlight and began to resemble strange vampire shopkeepers.”

The chilly, damp, surroundings predictably spooked many visitors to the tunnel – including Robert, all these years later.

He said: “Six engineers died during construction and many others died while sleeping in the tunnel. I haven’t seen any ghosts – but even I don’t like going down into some of the places sometimes.”

Because of all the quiet archways and dark corners, during the tunnel’s sordid heyday there was also plenty of ‘snogging in the tunnel’ – to put it mildly.

Robert said: “The tunnel was open 24/7 and rarely policed. After sunset it got a bit sleazy.”

However, in 1865 the tunnel was bought by the railway, who redeveloped it for train travel. The homeless, thieves, prostitutes – and corpses – were cleared one last time and Rotherhithe’s bizarre underworld was no more.

Robert gives guided boat trips above the tunnel and train trips through it on Tuesdays, Thursdays and Saturdays. For more information visit: www.brunel-museum.org.uk

Isambard Kingdom Brunel who, along with his father Marc, designed the tunnel