Rolling with the punches: The ups and downs of boxing promoter Dick Burge 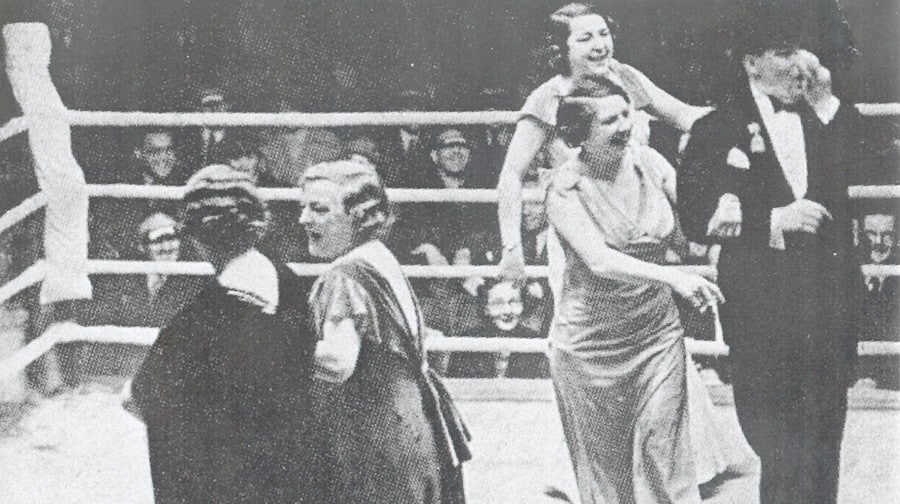 At the Silver Jubilee of The Ring in 1935 Bella linked arms with the Master of Ceremonies Patsy Hagate and gave an impromptu dancing routine.

Dick and Bella Burge ran a thriving boxing club for thirty years in a converted house of God in Borough, where they made sure the working man could always afford to buy a ticket.

But before the ‘up’ came a big ‘down’ for the two former entertainers after Dick was caught up in one of the biggest fraud cases this country had ever seen.

In ‘Round One’ Dick was a boxer – the English Lightweight Champion between 1891 and 1897 and one of the finest fighters of the 1890s. Bella was a music hall entertainer from New York. Following a short stint as Marie Lloyd’s dresser, Bella, christened Leah Belle Orchard, developed her own act with Marie’s sister Rosie – The Sisters Lloyd.

In 1901 Bella and Dick appeared on the same bill and the two lovebirds were married in October that year. But just a year later the pair were on the ropes after Dick was sentenced to ten years hard labour for his part in the modern-day equivalent of a multi-million pound bank fraud.

In a complicated tale of conmen fiddling other conmen, the story of the Bank of Liverpool fraud begins with one of their ledger clerks -Thomas Peterson Goudie. The hopeless gambler started forging cheques from the account of one of the bank’s richest customers – Robert William Hudson in 1899. He used most of the money to pay of his rent arrears and other debts and the rest was lost on the races.

By mid October 1900, Goudie had stolen £2,100 and was travelling to London on a gambling spree when he met two crooks – Thomas Francis Kelly and William Haines Stiles – who would go on to con him out of his ill-gotten gains.

Kelly and Stiles convinced Goudie that they had placed a bet on his behalf, and the horse had not come in. They had done no such thing, but in his ignorance, Goudie wrote them another cheque, courtesy of Robert William Hudson, to pay off his fictitious debt.

After retiring from boxing, Dick had found himself in some financial difficulties and hearing of the successful con from Kelly and Stiles, he decided to get in on the act along with his accomplices, James Mances and Lawrence Abraham Marks.

Goudie ended up sending cheques for unplaced bets to all five of the men after Burge and Mances travelled up to Liverpool to track him down.

In November 1901, just one month after Dick and Bella were wedded, the Bank of Liverpool received a telegram from R. W. Hudson, querying a cheque of £9,000.

The game was up and after ten days on the run, Goudie was arrested for defrauding a grand total of £168,000 from the bank and Mr Hudson. The modern day equivalent would be in the region of £15million.

The trial of Goudie and his five tormentors lasted five days. Goudie and Dick Burge were both sentenced to ten years with hard labour. Kelly and Stiles only got two years after pleading guilty to conspiracy, Mances legged it to France before he could be arrested and Marks is said to have thrown himself off a ferry from Boulogne to Folkestone.

It was reported that eight year’s into Dick’s sentence, he saved a prison guard who was being attacked in a violent riot , which saw him released two years early.

Bella had stood by her man throughout his sentence, throwing herself into her stage career and squirreling away the proceeds. On his release in 1909 they decided Dick should use his knowledge of the boxing world set up their own club – one that anyone could go to – or in Bella’s words: “Our place would be no place for Nobs Dick, our patrons belong to the cloth cap and muffler brigade.”

The venue they selected was along Blackfriars Road and was built originally as the Surrey Chapel. The peculiar shaped circular building had been designed to leave no where for the devil to hide, but now it would be the perfect home to a modest 14 foot square boxing ring, leaving the fighters nowhere to hide instead.

After negotiating a lease they had to clean the site of rubble, and Bella came up with the idea of using an army of down and outs to do the work in return for a decent feed.

The Ring was adapted from the former Surrey Chapel, which had a circular design so the devil had nowhere to hide.

They opened The Ring with their first bouts on May 14, 1910 and continued the soup kitchen to build awareness of the new venue.

By 1912 The Ring had become established as London’s leading fight venue for regular boxing. Bouts were held four or five times a week all year round with the big on a Monday evening.

Two years later and World War One took Dick away from the club as he enrolled in the Sportsman’s Battalion. In 1918 he died of double pneumonia, leaving Bella to run The Ring on her own. On the first night she promoted an event after Dicks death, she stood in the ring in front of a baying all male crowd and repeated the promises she made to her husband, that the club would continue under her guidance.

In a world where women had only just got the vote, ‘Bella of Blackfriars’ made a great success of The Ring until the Second World War came along. The club closed for refurbishments in 1939 but a German bomber put an end to Dick and Bella’s dreams after a direct hit in 1940 turned the site into rubble.

The Ring Pub stands on the site now but it may well have tickled Dick and Bella to know that a boxing club of the same name just round the corner is a thriving success with its white collar ‘cityboxer’ bouts – the Nobs have been let in….and given a pair of gloves.

With thanks to John Prendergast for his previous research into Bella of Blackfriars.

dick and bella were my great great etc auntie and uncle, and dick burge the 4th regulary visits the ring pub, my uncle met an ageing bella and of course she was quite a women!! as was uncle dick too! x

This is something I was told as a kid, my grandad, William Walter French born in 1898 boxed at the ring not sure of the year, his nickname was Punch. Apparently he was a bare fist fighter, he also trained the metropolitan police boxing team. Are their any records of him ever fighting there.
Thank you in anticipation.

Southwark NewsHistoryRolling with the punches: The ups and downs of boxing promoter Dick Burge