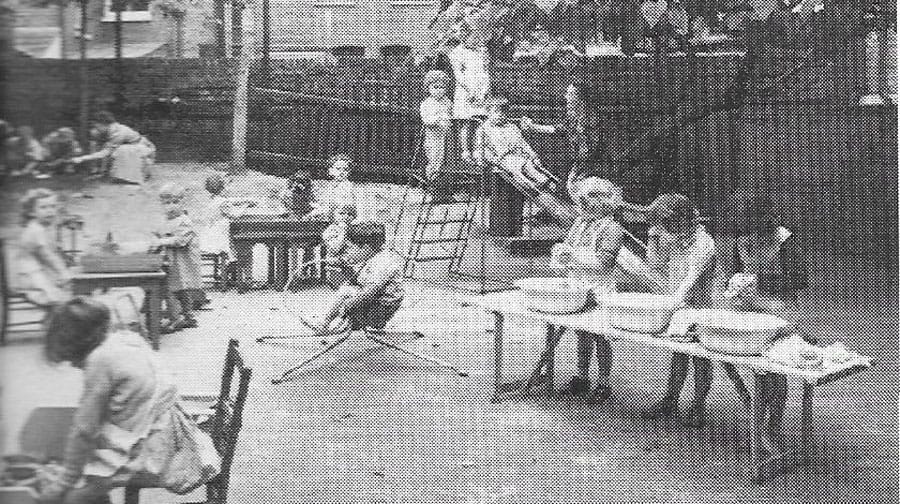 The Settlement's nursery gardens in 1956

THINK OF early 20th century London and most will immediately picture The Blitz, rationing and rubble, while in political terms, it ushered in the creation of the welfare state.

But how many people alive today would recognize that such projects for creating safety nets were being tinkered with at the turn of the century by a charity based in Peckham?

It was the ‘settlement movement’ that originated and in 1896, and made one of its early homes in the borough of Camberwell, that gave rise to the first incarnation of meals on wheels, the first London children’s nursery, and the first ‘Unemployment Insurance Scheme’.

Its history is recalled by former Peckham Settlement chair, 86-year-old Paddy Cribb, who remained a trustee until 2005.

The most famous of the original settlements is Toynbee Hall in the East End of London, and was founded by Oxford University. But the movement more generally was started by Home Counties public schools during the “depressed Victorian times”, who also led missions in Birmingham, Sheffield and Edinburgh.

Paddy says the concept was to help people in deprived areas and try to “innovate new solutions to social problems”.

The Peckham Settlement first came about in 1896, and was driven by Miss Frances Dove, head mistress of Wycombe Abbey girls’ school in Buckinghamshire; later made Dame Frances Dove. She set up the first south London settlement in a six-and-a-half acre district known as St Hilda’s in the Parish of Camberwell, with its main house located off Albany Road.

“She had a great conscience,” Paddy said, “She wanted the girls’ school to set up a settlement of their own while boys’ schools were doing the same.

By 1897 there were 41 girls’ and boys’ public schools giving up their time to help educate and care for the people of Peckham, which, it seems, was a particularly poverty-ridden place.

Paddy cited one age-old factoid that the area’s population density was “1,000 individuals to the acre” compared to a national average of 80 to the acre. That made the Dickensian slums of London more than ten times more tightly-packed than the typical Victorian English town.

All of this contributed to the spread of disease and a reliance on crime to salvage an income.

“Peckham had no district nurse, no anti-natal or dental aids, and often no school clinics or milk supplies,” Paddy said. The Settlement volunteers would also visit young offenders’ institutes to educate and instill faith in the Church of England.

“In those days young people could get the harshest punishments for really very petty crimes and be locked away for years,” Paddy said.

The Peckham Settlement is also credited with setting up London’s first nursery school in 1913 for children whose parents needed to work. Whilst it prevailed throughout the 20th century, the Settlement even operated as a charity-run job centre, giving free advice and expertise on how to write CV and letters to employers.

But In 2012 the Settlement sadly went into administration and was liquidated to settle its debts, which also meant surrendering its Goldsmith Road property where it had resided since 1930. Though now, with its bills paid, the Peckham Settlement is due celebrate a re-launch on June 16 at its new home in Peckham Library, and reopen the following week.