Turner wanted viewers to think about the history of the Temeraire, how it had been a hero of the decisive Battle of Trafalgar; but how despite that, the nation seemed to have turned its back on her. 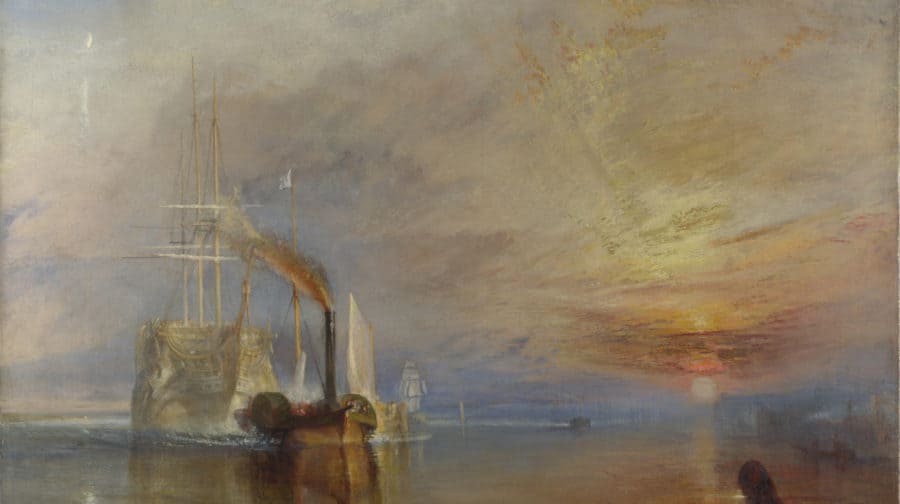 Earlier this month, JMW Turner’s painting, The Fighting Temeraire was unveiled as a scene on the new £20 note.

As the News reported, the painting has an unusual Rotherhithe link, as it depicts the celebrated gunship being towed to Rotherhithe in 1838 to be broken up for scrap.

But the Rotherhithe scene wasn’t quite true-to-life; so here we delve into the history of the painting which was voted in 2005 as the nation’s favourite.

Hung in the National Gallery, the oil painting depicts a sunset, seen as symbol of an end of an era, as the already ghostly 98-gun vessel is being pulled by a dark and squat tugboat.

The Temeraire was one the hero ships of the 1805 Battle of Trafalgar, whose name means ‘fearless.’ At the Battle she proved to be worthy of her name.

The prospect of Napoleon’s combined Franco-Spanish  forces invading Britain were only put to rest after the Battle, which finally proved once-and-for-all Britain’s undisputed naval supremacy.

Lord Nelson is well-known for being the mastermind behind the Battle, and his tactical genius is what proved to be key to ending the Napoleonic threat.

While the British had 22 ships to the French’s 33, Nelson arranged his into two columns rather than facing the enemy vessels head on.

But its progress was impeded by the French Le Redoubtable – until the Temeraire came to the rescue.

With a series of daring manoeuvres Sir Eliab Harvey’s ship flanked the Redoubtable on one side, with HMS Victory on the other – and both fired at their foes at point blank range.

“It would be difficult to describe the horrible carnage caused by the murderous broadside,” said the French captain of the Redoubtable. “[HMS Temeraire] came up and stationed herself astern of the Redoubtable and fired into us at pistol range.

“In less than half an hour our ship was so riddled that she seemed to be no more than a mass of wreckage.”

While Nelson was hit by a musket shot fired from the Redoubtable, the Temeraire continued to fight the Redoutable and destroyed the French Fougueux in the process.

A storm later swept away the wreckage of the enemy vessels, and the Temeraire’s status as “most noble and distinguished” was sealed. On September 6, 1836, the ship was actually taken for scrap at Beatson’s ship-breaking yard by two tugboats, not one.

And contemporary observers said that there was no sunset in real-life as the heroic vessel was taken on its end journey – and in his painting, looking north from Rotherhithe, the sun effectively sets in the east.

It is no longer flying the union flag, but instead a white flag, showing it is in commercial hands.

When Turner exhibited the painting in 1839, he included the lines: “The flag which braved the battle and the breeze / No Longer owns her.”

By 1838, the Temeraire’s fighting days had long been over having been retired to a hulk – a ship that can float and not sail – by 1812.

For the past thirteen years, she had served as a supply ship moored off Sheerness, Kent, and by the time she was auctioned off for her timber to ship-breaker John Beatson, many of her features were no longer in place, including the tall masts and rigging.

But Turner painted the ship with the rigging and masts still in place, as well as using a brighter white and gold colour scheme instead of the darker yellow and black that the ship was in real life.

The tug-boats were also painted much darker than in real-life, spewing out thick, black smoke.

The artist’s deviation from reality was deliberate.

Turner wanted viewers to think about the history of the Temeraire, how it had been a hero of the decisive Battle of Trafalgar; but how despite that, the nation seemed to have turned its back on her.

But so, too, was the painting a comment on the particular cross-roads in British history brought about by the Industrial Revolution.

The setting sun symbolises the end of an era; while the waxing moon is a symbol of a new era that was beginning, a theme common to many of Turner’s works, the industrial era.

Turner bequeathed all of his works to the nation in his will, and the Fighting Temeraire now hangs in the National Gallery.

It will also feature on the new £20 note due to be in circulation from February – giving everyone a piece of Rotherhithe history in the pocket.

Southwark NewsHistorySE16 history in your pocket: Turner’s Fighting Temeraire – to feature on £20 note – wasn’t quite as it seemed when he painted it