Fashion in the forties did not just find innovative ways to recycle – it acted as reminder to all who wore it that one should be industrious at all times.

IT is often said that man can withstand anything in the face of adversity –this was not only true of man’s greatest tussles in combat, but also of the sartorial struggles that war brought with it.

In the Second World War, Britain became a nation in uniform, as men and women donned attire for their services in the war. With the limited purchasing power that rationing brought with it, people were encouraged to be creative to make clothes last longer by mending, altering and adapting new garments out of existing material.

Staggering feats of resourcefulness saw the most unlikely creations fashioned out of any available fabric, turning parachute material into bridesmaid’s dresses

and aircraft apparatus into jewellery. To tackle the challenge of rationing utility clothing was introduced in 1941, which standardised production to help out with the war effort.

Despite efforts to customise and glam up dated outfits, ‘Austerity Regulations’ such as shoes with a maximum two inch heel were a stark reminder of the sobriety of war. Functional equipment required for the war effort was cleverly and elegantly concealed as high-fashion as gas masks were contained within the base of black leather lady’s clutch handbags.

Black out accessories, like buttons that glowed in the dark to increase visibility during air raids, were available at Selfridges in pretty floral varieties.

Fashion in the forties did not just find innovative ways to recycle – it acted as reminder to all who wore it that one should be industrious at all times.

One Second World War period British propaganda scarf in the exhibition, by Jacqmar of London, contains numerous representations of domestic objects, with encouraging wartime slogans such as “Salvage Your Rubber” and “Switch That Light Off”.

By wearing garments like this women were able to demonstrate that they were not just being flippantly fashionable but that they were doing their bit for the wartime effort. 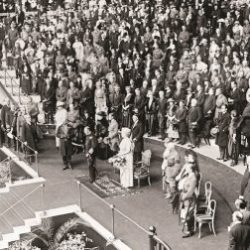 100 years of the Imperial War Museum 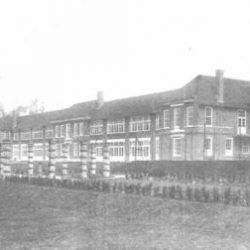