The 1980s Southwark mortuary scandal which saw corpses robbed of jewellery, cash, and their glands sold for growth hormones 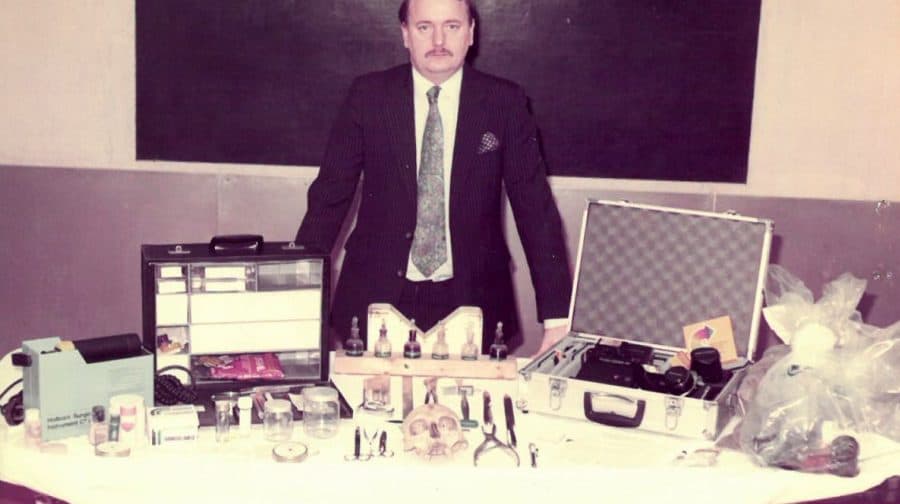 As the incoming superintendent, aged in his early thirties, he had the task of modernising the busy facility on the site of the former Marshalsea Prison and to make it fit for purpose for the 1980s.

Upon arrival, he describes the scene as one of absolute pandemonium, in his tell-all new book, ‘Corrupt Bodies: Death and Dirty Dealing in a London Morgue’.

An assistant, with cigarette dangling from his mouth, hosed blood from the floor. Beyond the post-mortem room was a long passage with fridges for the corpses.

A ‘foul room’ – to deal with those whose bodies were referred to by those in the trade as ‘stinkers’ – was beside the door the Coroner’s Court and Jury Room.

The smell, often so pungent, would frequently overcome the juries who were adjudicating cases next door, requiring that they be evacuated to nearby Tabard Gardens, writes Everett. The mortuary, which was on the site of the former Marshalsea prison

But despite the slapdash conditions of one of the capital’s busiest mortuaries, dealing with 2,000 bodies a year, there was something yet more Dickensian he was to quickly discover.

Mortuary assistants had been looting the bodies of the dead – making a pretty profit by pilfering the possessions from the corpses to supplement their salaries.

“Lots of deaths arrive here without relatives,” Everett was allegedly told by his a staff member only hours into his arrival. “Sometimes they’ve got money or jewellery on them.

“We take them, sell the jewellery to someone in Peckham and share out the proceeds later. It’s quite safe.”

The plot began to unravel when a whistle-blower approached Everett in July 1982, saying she had been offered a bung to keep quiet after she overheard staff discussing stealing from the bodies.

It was, at least, a means of getting staff investigated by the police over the arrangement, says Everett.

(His own attempts at setting up recording equipment in the mortuary to catch out the criminal tendencies of his staff had so far proved unsuccessful). The cases exposed ‘gaping holes’ in mortuary legislation (names have been redacted.)

In August, he agreed a plan with Scotland Yard: he would go to the Dickens Inn in Wapping wearing a wire, and invite out the staff ringleader for a drink.

Under the watchful eye of detectives, Everett plied his underling with pints of Fosters in a bid to get him to spill the secrets of the gruesome jewellery snatching trade.

The recording proved a central plank of prosecution evidence that would make front page news.

Faced with the recording, the deputy – named by Everett as ‘George’ – who had been stung in the undercover operation pleaded guilty.

But a co-conspirator, Eric, did not, meaning the case went to trial – and as the forensic mortuary superintendent, Peter was to be a witness.

Part of the problem, he explained to the court, was that mortuary assistants received semi-legitimate payments all the time.

Assistants received so-called ‘coroner’s fees’ for preparing and dissecting the body so visiting pathologists could be in-and-out as quickly as possible.

Funeral directors would also regularly tip assistants to measure corpses for them, so they did not waste time and manpower figuring out what size coffin the deceased would need.

“The dead do not rest in peace,” Everett dramatically told the Old Bailey jury. “They rest in pieces!” Cases of looting from the mortuary made headlines. “Man ‘robbed corpses’” reported the Times on page two of its January 5, 1984 edition.

“No sooner had undertakers delivered the corpses than their pockets were rifled and rings removed,” the prosecution alleged in court, calling it a “rather horrible and bizarre story.”

The case was going well for the prosecution. But under cross-examination, Everett made what he calls a ‘schoolboy’ error.

Under cross-examination, he was asked whether he thought Eric was guilty.

“I don’t think he’s guilty”- responded Everett, before being cut off half way through the sentence.

(He had intended to finish: “I know he’s guilty.”)

George, however, who had pleaded guilty to conspiracy and theft, was given an eighteen-month sentence, nine of which were suspended.

As well as revile and disgust, the corruption scandal provoked concern about the regulation of mortuaries across the country.

Examples of mismanagement, abuses and corruption across the country came out of the woodwork. The story has been told for the first time by Peter Everett in his new book (Image: Icon Books)

Several hospitals had accidentally sent the wrong bodies to be cremated. One mortuary had ‘lost’ people’s organs on multiple occasions, while another was reportedly selling universities with illegal body parts.

At the time, no statutory body existed to oversee the role of mortuaries.

Coroners were answerable to the Home Office, pathologists to the NHS, coroner’s officers were police officers, and mortuary staff were employed by the council.

The system left itself open to abuse – abuse which the case uncovered by Everett highlighted.

“When these practises were discovered we stopped them in Southwark, but the basic problem is that although mortuary assistants are employed by the local district council, they may often take day-to-day instructions from other people,” a then-Southwark environmental health officer told the Times.

But in end only six coroner’s officers (who were serving police officers) were sacked and prosecuted for their role in the corruption, writes Everett.

Despite shining a spotlight on ‘gaping holes’ in mortuary legislation, Everett says he wasn’t thanked for it at the time.

Staff wages were cut across the country for they could no longer earn on the side.

And after the payments were discovered, the taxman sent a backdated bill of thousands of pounds to technicians across the country – leaving Everett, he says, without friends, worn out from the court case, and still in charge of a busy  Victorian forensic mortuary.

Peter Everett’s book ‘Corrupt Bodies: Death and Dirty Dealing in a London Morgue’ is published by Icon Books and is on sale now.

Some names and details in the book have been changed. The News has chosen not to use the real names of the mortuary staff.