'The things he wrote about were smaller things but important to him so while other people were talking about war, he wrote about the local rat catcher' 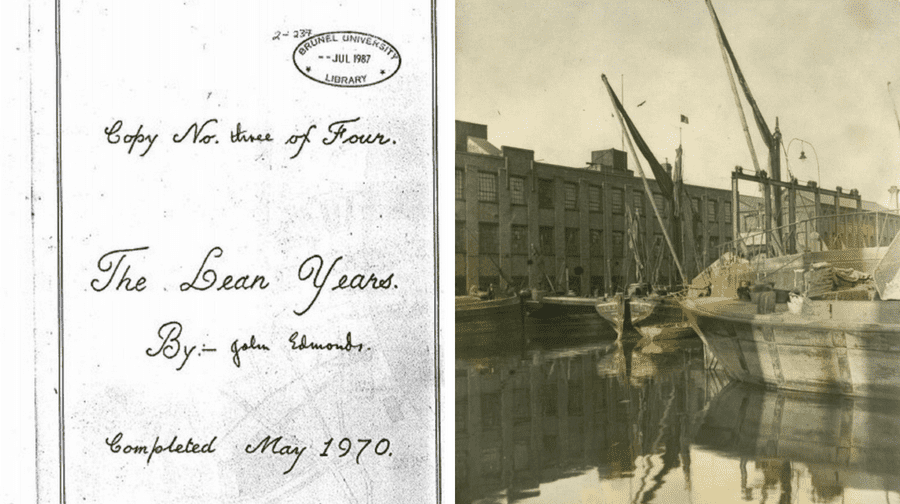 John Edmonds' memoir The Lean Years (left) and Surrey Canal, which he writes about (from the collections of Southwark Archives)

A memoir detailing Bermondsey life in the last century harking back to the days of the bustling Surrey Commercial Docks and the intricacies of the area’s railway system has been rediscovered by a student.

The Lean Years, written by John Edmonds (1911-84), paints a vivid picture of past Bermondsey life, particularly during the inter-war period, which describes the landscapes and characters – such as the rat catcher.

Edmonds, who lived in Eugenia Road for the first 30 or so years of his life, also pays particular interest to the railway system surrounding Bermondsey which he was fascinated by.

Liverpool John Moores University student Jordan Walker, who transcribed the memoir and based a series of blogs around the work, said John “really stood out” to him compared to other authors of that time.

“All the others sort of have the grand schemes of twentieth century life so they are all either at war or their blogs are dedicated to a job they are passionate about but John was more of an everyday man,” the 21-year-old English student told the News.

“The essence of his character came out as a character of Bermondsey; he wasn’t going on about fighting in the war but about the character of the streets – and that’s what spoke to me. Surrey Canal c 1920 (from the collections of Southwark Archives)

“The things he wrote about were smaller things but important to him so while other people were talking about war, he wrote about the local rat catcher.

“It was really strange as all the other blogs are quite sentimental, but one of the things he found most entertaining in his childhood was this guy who came out into the streets and drew lots of crowds.

“He was advertising his service where he caught rats and he used to have this big bag of live rats and a bag with two ferrets. He would then put a rat and a ferret under his shirt until you could see blood.”

Edmonds’ fascination with railway systems in the area is a running theme throughout the memoir, and he believes they are “a great monument to the Victorian age about which little is known or appreciated generally”. He references the sounds he hears lying awake at night near the docks and railway – the “deep note of ocean-going ships’ sirens” and “the steady one, two, three, four, beat of goods train engines making the long haul up the incline from the Bricklayers Arms Goods Depot to Canal junction and the main line”.

“He was obsessed with the local railway system and all around the Silwood estate between the Grand Central Canal and New Cross Gate,” Jordan explained. “He has a little passage in the memoir where he just takes you on a journey of the railway.

“He says the railway system is more impressive than anything modern-day machinery can do and there’s that pride in his area he ruminates on things.”

Edmonds references the street names surrounding him, as well as Southwark Park, Deptford Park, the docks, and “certain pieces of open land trapped between the many intersecting railways”, which he describes as “the oases in this desert”. Leroy Street, in Bermondsey, 1933 (from the collections of Southwark Archives)

“He talks about other people’s education and says for example that a local character had a private school voice,” said Jordan. “He made these distinctions between his own ordinary education and these people he referred to as superior.”

The Lean Years was completed in 1970 and a copy of the memoir is included in the Burnett archive of working class autobiographies at Brunel University.

Jordan’s series of blogs about the memoir formed part of the Writing Lives module at Liverpool John Moores, which aims to champion the memories of working-class people.