The summer 14,000 women walked out of Bermondsey’s and Rotherhithe’s factories 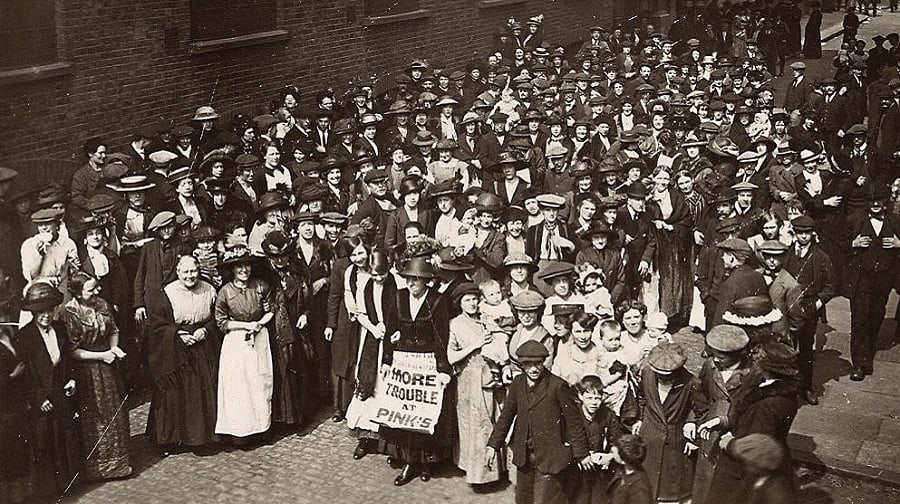 During a particularly hot summer in 1911, thousands of women downed tools and walked out of Bermondsey and Rotherhithe’s factories in protest against “appalling” working conditions and pay.

A feeling of discontent had grown in the area among both the female factory workers and male dockers – and they had decided enough was enough.

The women’s strike saw 12,000 workers walk out of factories on the first day – and eventually 14,000 marched to a demonstration at Southwark Park, where famous faces such as suffragette Sylvia Pankhurst spoke.

This was to become known as the Bermondsey Uprising.

The strike could not have happened without Ada Salter – Bermondsey’s first female councillor elected in 1909 – and her friends Mary Macarthur, who set up the National Federation of Women Workers (NFWW), and Eveline Lowe, who was the first woman elected chair of London County Council.

“It was an age that was actually worse for women than the previous ones because of Victorian hypocritical morals,” historian and author Graham Taylor explained.

“They were actually worse off because of industrial revolution which forced them into machinery jobs, whereas 200 years ago in women’s industry they used to do basket weaving at home and they had skilled jobs and got money in.

“This factory work was not like factory work now – there were no trade unions and that meant the conditions were appalling.”

Some factories such as Peek Frean biscuit factory, which was run by Quakers, weren’t as bad as others such as Pink’s [jam factory],” Taylor explained. Many women were injured in the factories because of a lack of health and safety, and they worked long hours for little pay. “Round here there were jam factories and the jars into which the jam was forced was a very poor quality glass and it would explode so lots of women were blinded by flying glass or had their faces shredded by it and even bulbs in lights would explode,” said Taylor.

“In the can factories where they made the tins or metal boxes they had these presses and there were no guards on them so women lost their fingers and their thumbs and sometimes an arm.

“The docks were also terrible for the men because they used to keep the wages down since docking work was intermittent and dependent on how much trade there was, so dockers had to really compete to get a job and had to accept the lowest wages and there would even be fights among the men to get the jobs.”

From 1908, Ada Salter and Eveline Lowe went round the factories in the area to see if they could get the workers to join the NFWW – Mary Macarthur’s women-only trade union.

“They had very few women join but they made them all aware that there was a trade union they could join which was the crucial factor so when the big moment came they could walk out of the factories knowing they could get support,” said Taylor.

In July of that year, the men came out of the docks on strike – and in August, completely out of the blue, most of the women walked out of the factories.

“In just a few days 12,000 women walked out and all the factories came to a halt,” said Taylor. “What happened was the women had become aware that if they came out on strike they would not be without assistance. Ada set up food depots and kitchens all along the river right from London Bridge down to Woolwich to help the dockers and the women.”

“Then, an unprecedented thing happened. Some of the dockers started to get offered settlements towards the end of August but most of them refused to accept until the women’s demands were met.

“That was a real turning point in British history – men and women acting together as equals for the first time.”

The strike, which lasted weeks, saw an increase in wages in all of Bermondsey and Rotherhithe’s 20 to 30 factories.

Even Pink’s settled in the end – although it was the last to do so.

Ada received a gold medal from the trade unions for her work following another dockers’ strike in 1912 and was made an honorary life member of the union now known as the GMB.