The story of one Rotherhithe family 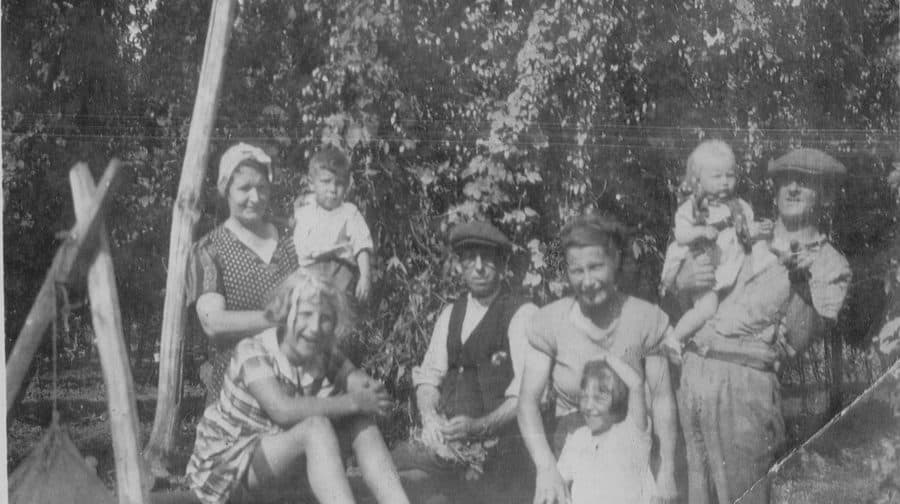 Michael Ash held by his nan down Hopping

Kathleen Ash would have had her baby in Eugenia Road if it wasn’t for Hitler.

The family were hopping in Kent when their street was bombed so Mrs Ash booked herself into Pembury Hospital to give birth to Michael.

They then evacuated to North Devon while dad Albert stayed and worked in Woolwich Arsenal until that got bombed and he got his call-up papers. On rare trips back to London young Michael vaguely remembers searchlights raking the sky, air raid sirens and dashes to the shelters. Sometimes “you got in the cupboard under the stairs.”

He was too young to remember the farm they evacuated to but does remember vividly the day his dad was demobbed. “I sat outside waiting for him to come home, and when I saw him come round the corner I ran towards him, tripped over and got two black eyes!” He was also altar boy at St Katherine’s, the church in his street, where services were held in the vicarage after the church was bombed. “My mum used to speak of when I was christened there during an air raid!” he begins. “.

Hence, two neighbours were quickly drafted in as godparents to ensure baby Michael’s ticket to heaven was secured.

Hopping was an annual holiday for the Ash family.

“We went to Whitbreads Farm until the 1953 floods, and after that we picked at Frittenden… Then my grandmother bought an old coach, which got stripped out, converted into rooms, then towed down to Sheerness where she parked it in a field. We holidayed there a lot -it’s where I quickly learnt to swim after a wave swept me off my feet,” he claims.

“My mum, Kate, was a wonderful pianist,” Michael remembers. “She played regularly in the St Helena Tavern on a Saturday night, and when down Sheppey she played in the Minster Hotel where the boss thought it was wonderful how she attracted big crowds.”

This reminiscing led to Mike recalling meeting his wife Jackie in the Tiger’s Head in Catford in the ‘60s. “55 years later we’re still going strong,” he says. Michael’s first job was at The Star as a messenger boy for £3 2s 0d a week. “I loved it!” He went to work in a suit and tie while other messengers turned up in jeans, and this made him stand out because over the coming years he would be chosen for special duties.

Most of his bosses had fought as officers so would recognise a willingness to work.

Eventually, Michael was moved to the publishing department which produced the I Spy books, where he learnt all you needed to know about production.

One job was taking copies of new books to the bosses. “Even though I was just a little cog, those directors still made me feel important, and I took that all the way through my business life.”

At 20, Michael decided he needed to improve his education so enrolled at night school. He enjoyed the studying, comparing it favourably to his schooldays and the horrible environment created by spiteful teachers. Plus, he was able to stay in employment. Because National Service had stopped, Mike moved steadily upwards until he could earn no more or go no higher. At 29, with the skills and knowledge he had acquired, he felt it time to move on so put feelers out to his contacts.

A buyer at WH Smith put him in touch with a children’s books’ publisher where Michael talked himself into a Sales Manager’s job, travelling all over the country and coming home at weekends.

Business boomed so much the company couldn’t supply his demand for books so, against his boss’s wishes, Mike bought up ‘remainder’ stock wherever he could so he always had something for clients.

He saw money to be earnt, and that became the catalyst for him branching out on his own with a business in Greenwich that expanded to selling toys as well as books, with Michael doing the selling, the packing and the delivering.

In the mid ‘80s, while his business grew, Michael was introduced to the Rotary Club and saw a chance to give something back to Bermondsey when he realised more could be done for the OAPs’ Christmas party.

“When I joined they were sat in a cold mission hall and given a box with a sandwich in and a gift worth 50p! I thought that was really poor so took charge for the next 25 years,” he says. The party improved with good food, sherry, proper entertainment and a bag of essentials to take home.

By now his firm had grown. Michael employed family members and people he had met in his career, and it moved to Camberwell.

Eventually more staff were taken on as the company expanded and he was able to buy the old Garnar’s Leather Factory near Abbey Street where his business, which had now moved into publishing, located to.

“It mushroomed. We were exporting to Asia, America, New Zealand, Australia and the turnover was now just over £10 million a year… It was the best 40 years of my life,” says the man who looks like he has enjoyed every minute of it.

Michael Ash says he was lucky, but he made every bit of that luck himself to achieve what he did.

Nowadays the Ashes don’t holiday in a converted coach in a field but in their home in Spain, on cruises, and pretty much anywhere the fancy may take them. Hi Michael
Just seen your article and our class photo I,m Lenny Vincent sitting in the front row next to Brian Thorne and Georgie Dunnett you were up the back cause you were tall,

Southwark NewsHistoryThe Ashes: Michael Ash looks back on the Blitz, hopping holidays and a life in the book business