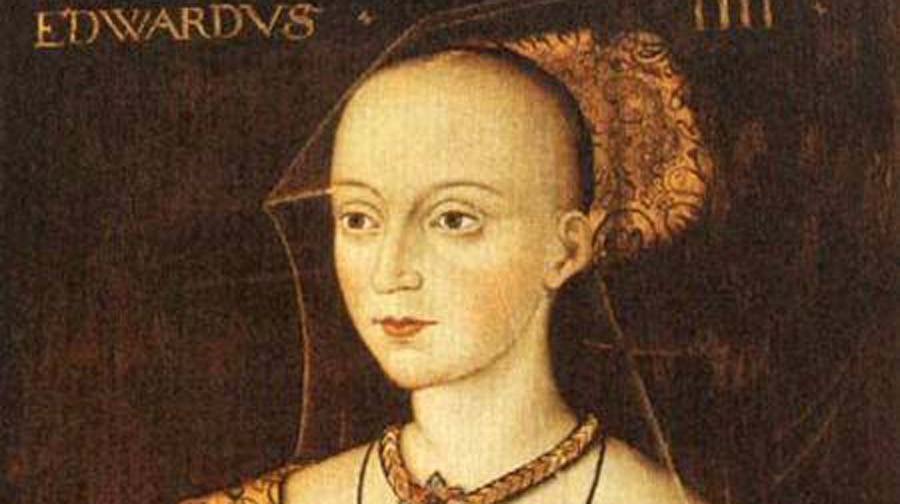 In the fifteenth century, ‘the most beautiful woman in the Island of Britain’ was embroiled in an explosive royal scandal which led to the deaths of thousands of men, before she was banished to Bermondsey, where she later died in relative obscurity.

Elizabeth Woodville was considered a woman of great beauty in the 1400s, with ‘heavy-lidded eyes like those of a dragon’. But although she was from a genteel family, she was not of noble descent and certainly not a suitable match for the King of England.

Edward IV was clearly not thinking with his head when he snuck off to marry the young widow in secret at her family home in Northamptonshire in 1464, making him only the second King of England ever to marry one of his subjects. This union turned out to be one of the most dangerous liaisons in our country’s history, reigniting the bitter war of the roses into bloody battle. The ‘two households, both alike in dignity…’ were that of York and Lancaster. They had been at war for over ten years when Edward IV took the throne in 1461. He usurped Henry VI when he led a defeat of the Lancastrians at the Battle of Towton ( in which Elizabeth Woodville’s first husband was killed, leaving her widowed with two children).

With Edward at the head of the Yorkists and the Woodville family known Lancastrian supporters, theirs was an ill-advised match just three years in to his reign. Edward’s power balanced precariously on the support of his cousin, Richard Neville, the Earl of Warwick, who felt at once snubbed and outraged by the clandestine courtship. The Privy Council – the most senior advisors to the King – were also openly against the marriage, telling Edward with great frankness that Elizabeth was ‘no wife for a prince such as himself.’

As the Woodville family began to climb the ranks in society, posing a threat to the Earl of Warwick, he plotted to take his revenge. He effectively swapped sides, forming an uneasy alliance with the Lancastrian Queen, Margaret of Anjou, to restore Henry VI to the throne in 1470. Just a year later, there was yet more bloodshed when Edward came out of exile and defeated Warwick at the Battle of Barnet and the Lancastrians at the Battle of Tewkesbury.

When Edward IV died suddenly from ill health in 1483, he and Elizabeth had had ten children together and spent a total of twenty years on the throne. But as their son Edward V took the crown, the vultures were already circling. Richard, Duke of Gloucester, Edward’s nephew was to be the young King’s Lord Protector, but instead he conspired to take the seat at the head of the table for himself. In his quest for the crown he moved to have Elizabeth and Edward’s marriage (and therefore their children) declared illegitimate. A Bishop came out of the woodwork to claim he had previously married Edward to Lady Eleanor Butler and the pair had allegedly signed a ‘pre-nup’ making all future marriages null and void. Elizabeth Woodville was also accused of being a witch – a dangerous charge in those days – and two of her sons, Edward V and Richard, Duke of York, were held captive in the Tower of London.

Richard Duke of Gloucester ultimately took to the throne as Richard III and the two boys were never seen again. In 1484 when King Richard publicly promised not to harm Elizabeth or her daughters, they came out of hiding and re-joined the royal court. The following year, Henry VII invaded and defeated Richard at the Battle of Bosworth, finally bringing a bloody end to the war of the roses. He restored Elizabeth’s title and honours as a queen dowager (the widow of a King).

Historians disagree as to whether she was then banished to Bermondsey Abbey or whether she chose to retire there to a life of religious servitude. Either way, she was certainly treated well at the eleventh century Benedictine monastery (located where Bermondsey Square is today) – and continued to receive an ample pension of £400 a year from the King.

She died at Bermondsey Abbey on June 8, 1492 in her mid-fifties. Before she died she had the satisfaction of knowing that her daughter, known as Elizabeth of York, had married Henry VII. Once a lowly King’s subject, Elizabeth Woodville would become the ancestor of every English monarch since Henry VIII.

Southwark NewsHistoryThe beauty queen who was banished to bermondsey