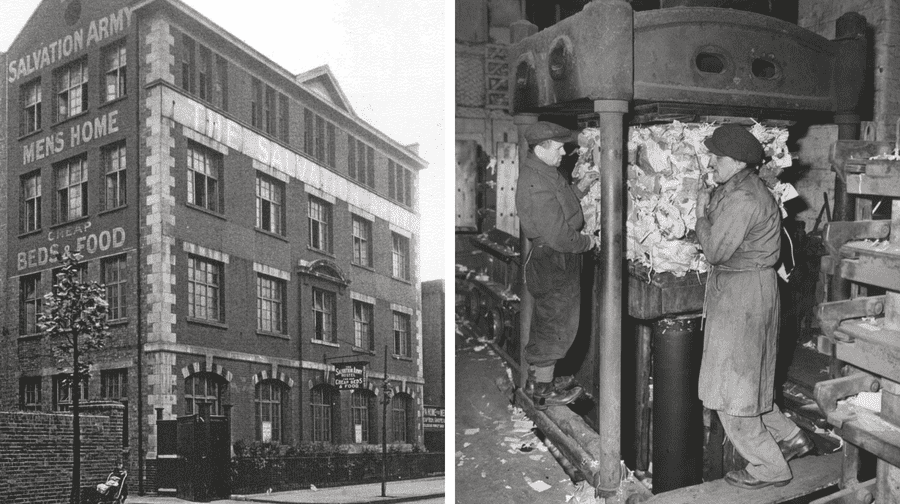 Passing through Spa Road in Bermondsey today, it is difficult to imagine the huge waste paper recycling centre and hostel that once stood there giving scores of homeless men shelter and food as well as a way back into work.

The Salvation Army ‘elevator’ at 122 Spa Road was opened in 1899 with the purpose of not only getting homeless men off the street, but also to help them rebuild their lives.

Housed in a former warehouse, it started off as a men’s hostel and recycling centre processing tons of waste paper each week, but grew quickly to include a hot food depot, laundry, refugee centre, family service centre and a rehabilitation workshop.

“It started in 1899 and by 1901 the census shows two resident officers and 102 men so it had grown quite a bit just in two years, although we are not sure how many there were to start off with,” Salvation Army officer Major Kevin Pooley told the News.

“The idea was, instead of it just being a hostel where men went to keep them off the street, it was also a rehabilitation programme and in the case of Spa Road the chosen medium of that rehabilitation was to collect recycled or reused waste paper. “The recycling was almost incidental; it was as much as anything a way to get them back into the discipline of work and most of the men by the time they came to us had lost that.

“The men came in at a certain level and they left at an elevated level.

“The whole point was if all they were able to do when they came in was use a brush and sweep up then that’s the sort of thing they would have been given to do and eventually in the elevators men would rise up so somebody who came in and didn’t have a job and did the sweeping might find themselves being raised up and going on to do a more responsible job.”

Major Pooley explained the reasons why many men found themselves homeless at that time were broadly the same as today.

“By and large the men became homeless as a result of a chain of events,” he said.

“Some men had become alcoholics and weren’t able to hold down a job, others would have relationship breakdowns, and some would move from one part of the country to another because maybe they had lost their job.” Records show that by 1910 the number of men in the programme at Spa Road had reached 600.

But just three years later in 1913 the elevator was devastated by fire – and again by another blaze in 1984.

“They spent some time debating whether to refurbish it and in the end it was decided it just wasn’t cost-effective,” said Major Pooley.

“It got to the point where, whether it was because it just wasn’t competitive in terms of the rest of the world cottoned on to recycling paper, the elevator closed down and all that was left was the men’s hostel.”

Above is an old BBC documentary from 1957 about the Salvation Army on Spa Road showing a man arriving at the hostel and features the ‘new’ Neckinger flats across the road.

Spa Road eventually closed its doors in 2001 and the building was demolished in 2003.

The Salvation Army continues to help the homeless today but no longer calls centres of this kind ‘hostels’, instead referring to them as ‘life houses’.

For more information about the heritage of the Salvation Army – a worldwide Christian church and registered charity – visit: www.salvationarmy.org.uk/international-heritage-centre