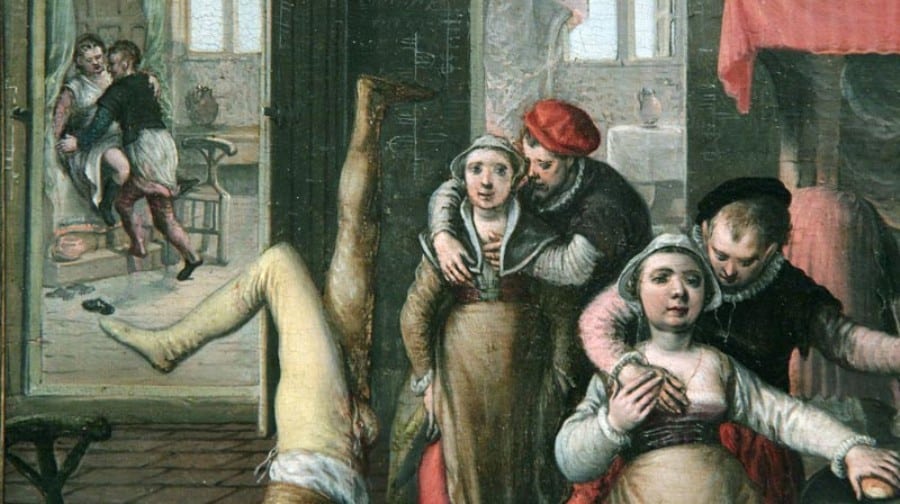 ‘Brothel’ by Joachim Beuckelaer, painted in 1562 depicts a debauched scene in the bishop’s brothels of Bankside.

The infamous red light district in Amsterdam is synonymous with naughty stag weekends a long way from home, but one of the first licensed brothel districts was in twelfth century Southwark, when the whole shady show was run by a Bishop.

After Duke William conquered England in 1066, land and property were given out like sweets to those favoured by the new monarch – his friends and relations first followed by his knights and Flemish mercenaries.

Large estates in Southwark went to William’s half-brother – Bishop Odo of Bayeaux, who in turn handed them on to the Abbot at Bermondsey Priory.

When King Henry I (fourth son of William the Conquerer) came to the throne in 1100 after unceremoniously murdering his own brother, he granted the priory jurisdiction over Southwark. This meant that instead of Southwark being ruled by the City of London or the County of Surrey, it was now a ‘Liberty’ ruled by their ‘hlaford’ or ‘Lord of the Manor’.

This was a mixed blessing for the Abbot, who had the pleasure of collecting the rent from everyone in his domain and setting his own rules about how the place was run, but also had the responsibility for dealing with every infraction of the law therein.

The good Bishop knew full well what he was taking on, according to E.J Burford’s latest version of his 1976 book, The Bishop’s Brothels, who writes: “The worthy and pious Bishop Gifford of Winchester clearly knew what he was leasing. It was the responsibility of the hlaford (Lord of the manor) to administer ecclesiastical correction to the ‘light-tayled huswives of the bank’ for the sins of fornication and whoredom as well as overseeing the ‘light’ houses themselves.”

The Bishop established his own court, which later became The Clink, to administer justice in the ‘Liberty of the Bishops of Winchester’, funded in part by the rents collected from the brothel owners and prostitutes.

In this way there was already a law and order circulating the brothels of Bankside, but a nationwide venereal disease scare led to them being sanctioned by royalty.

Soldiers returning from the Crusades in the 1100s led to a scourge of syphilis and the like.

King Henry II came to the throne in 1154 and as a brothel owner himself, he knew action had to be taken to stop the sexually transmitted diseases spreading like wildfire.

In 1161 he produced a decree especially for the brothels of Bankside, which shows how notorious they were, comparable to Amsterdam’s modern day equivalent.

The Ordinances Touching the Government of the Stewholders in Southwark Under the Direction of the Bishop of Winchester set out 39 rules for running the eighteen houses of ill repute and gave Southwark’s brothels what amounted to royal recognition, a special status and protection they would enjoy for the next four centuries.

The rules enshrined in the new law governed the behaviour of the 350 prostitutes, the brothel owners and their visitors. For instance, if a man were to leave his sword behind by accident and a prostitute or brothel owner refuse to return it – the gentleman caller would be fined twenty shillings. If he should instigate a breach of the peace because of his forgetfulness which led to an assault, he’d be slapped with a further fine of three shillings and four pence (which shows how common disturbances of this kind were in Bankside at that time).

One of the strangest rules of the ordinance forbade a prostitute from sleeping with someone for love, not money. She would be put in prison for three weeks and fined six shillings and eight pence and then put once on the cucking stool before being thrown out of town. (The cucking stool entailed being totally immersed in mud whereas the later ducking stool involved a mere dowsing).

Having sex for money was fine in Bankside but making love was reprehensible –a rule which must have been imposed for economic rather than moral reasons as time spent with a lover would mean less revenue for the brothel master and the Bishop.

To protect the Bishop’s profits further, a brothel owner found to be keeping a woman off the books would be fined a whopping 40 shillings and if she had snuck in without his knowing, she would be fined twenty shillings, put three times on the cucking stool and thrown out of the Liberty.

There was also a fine imposed for soliciting custom by way of shouting or grabbing men as they passed. Prostitutes were also forbidden to throw stones or grimace at the passing trade for fear of three days and nights in prison and a fine of six shillings and eight pence.

A hefty penalty of ten pounds would be demanded having a nun on the books, which may reflect the growing numbers of nuns who had drifted into an unholy way of life in that era. For the ‘working women’ one advantage was that they were protected from being accused of witchcraft – practically an occupational hazard for prostitutes in the twelfth century.

The women were also not slave-bound to their brothel masters, with the arrangement being much closer to that of landlord and tenant.

To clamp down on the dreaded syphilis, a quarterly inspection was carried out and those found suffering from ‘the burning disease’ were fined a crushing 100 shillings. The delightful options for treating the disease at that time ranged from vinegar and water, white wine and even fresh animal’s urine to be administered to the infected parts.