The Camberwell emblem that isn’t from SE5 at all…

Have you seen the new mural? 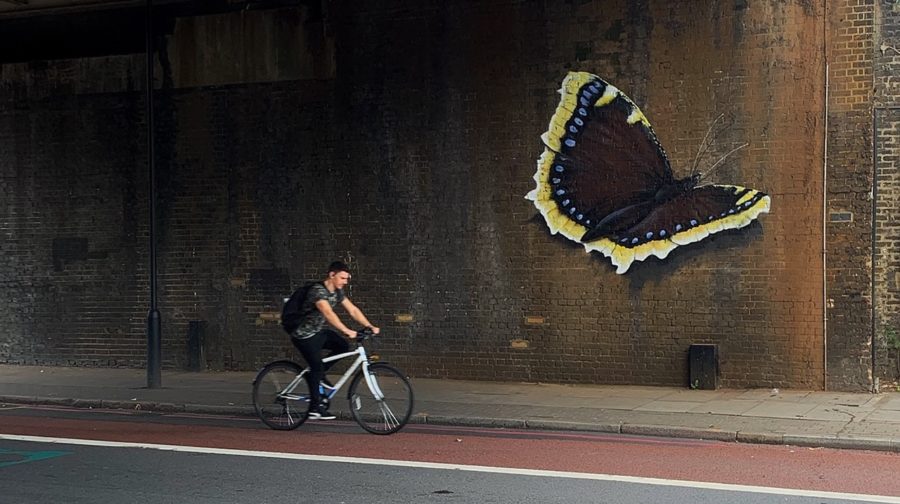 The new mural by Lionel Stanhope

You could be forgiven for thinking the Camberwell Beauty, a species of Butterfly named after the corner of south London where it was first recorded in the UK, was endemic to Southwark. Sacred Heart pupils next to the ‘Camberwell’ street sign

But, in truth, its name is rather misleading, and the Camberwell Beauty doesn’t actually hail from SE5 at all.

It is named after the area thanks to Moses Harris who, in 1748, first spotted the dark, winged insect on what is now Coldharbour Lane.

An alternative suggestion – the Grand Surprize – was mooted, but it was ‘Camberwell Beauty’ that captured the imagination.

The species – whose scientific name is Nymphalis Antiopa –  is found in continental Europe, Asia and North America, but has been recorded in small numbers in East Anglia and the South East, individuals who have found their way mysteriously to the British Isles by accident.

Sightings in the UK are few and far between, and none have been recorded in London since Harris’ great find – although a flurry appeared across the country in 2006.

Abroad, the species’ name usually describes its dark, yellow-fringed wings, such as ‘Mourning Cloak’ – used in the USA.

But its scarcity hasn’t prevented the creature from becoming something of a mascot for the area, including in Butterfly Walk shopping centre, the park gates on Camberwell Green, and a mural on Wells Way.

The tiled mural originally belonged to Samuel Jones & Co, a print manufacturer bombed during the war.

It was saved and relocated to the site of the former library and baths near Burgess Park, now used as the base of the famous boxing club Lynn AC.

And, this week, a new mural showing the lovely creature in flight has been pained by south London artist Lionel Stanhope in a railway arch on Camberwell New Road, joining a new ‘Camberwell’ sign created last month.

Although you may not come across a real-life Camberwell Beauty, south London is one of the best places to see butterflies, with the Horniman Museum’s butterfly house hosting hundreds of butterflies within its indoor tropic garden, all year round. Being the only person to have ever recorded a Camberwell Beauty in London is not the only of Harris’ achievements.

Born in 1730 in Holborn, the entomologist and engraver was a skilled illustrator whose pictures of species he discovered and identified were used by scientists.

One of his greatest accomplishments was the creation of his ‘colour wheel’, familiar to many from their time at primary school.

In ‘Natural System of Colours’, using the work of Isaac Newton, Harris identified how artists’ can create further colours by mixing the primaries of red, yellow and blue.

Fascinating story. The Americans may use the depressing name Mourning Cloak but literature acknowledges Camberwell The French writer Colette writes about coming across Camberwell Beauties In the forest outside Paris . Hopefully Lionel Stanhopes mural will tempt our beauties back

Southwark NewsHistoryThe Camberwell emblem that isn’t from SE5 at all…