‘The cleanest place to doss since leaving home’ 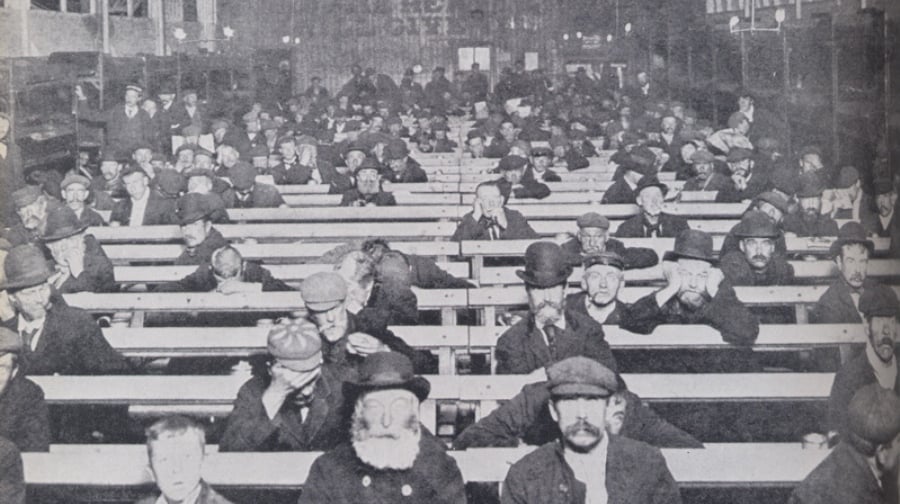 If you’ve ever fallen asleep on a fellow train passenger, you’ll know it’s difficult to sleep sat upright. But that is exactly what was on offer to the homeless and the destitute of Victorian Southwark – if they were lucky.

A penny-sit up was one option open to the poor at the Blackfriars Salvation Army hostel, where men could crowd in to rows of benches and pay one penny to sit there all night in the warm, but they were not allowed to lie down. For two pennies you could upgrade to a bench with a rope strung in front of it to lean over and for four pennies you could get a wooden coffin to sleep in.

These lodging houses and workhouses provided shelter from the harsh London winters before the days of the Welfare State, but they had an awful reputation for being dirty, cramped, flee-ridden cesspits.

At the end of the nineteenth century Lord Baron ‘Monty’ Rowton set up his own company to invest some of his substantial wealth into building six hostels for working men in London to put an end to the squalor of lodging houses for good.

On Christmas Eve, 1897, the Rowton House in Newington Butts was opened to the public, the press and an impressive list of dignitaries. The 805-bed hostel was the largest of its kind with individual sleeping cubicles (with actual beds in), hot food available and bathing facilities, all for six pence a night. There were 1,650,000 bricks used to build the colossal working man’s hostel, two hundred tons of steel joists, three miles of piping and 2.5 acres of flooring and paving.

Lord Rowton told a newspaper at the launch that he wanted to “break down the disgusting life led in our common lodging houses. The way single working men have to live in London is one of the most awful blots on present day civilisation.”

The other options available at the time were either squalid and filthy or charity handouts with religious obligations attached, or both.

“The working classes delight in places of this sort,” said Lord Rowton. “There is no air of charity about them. They are built for a business purpose and the man who behaves himself and pays his money is just as welcome whether he wears a greasy blouse or a black frock coat.

“I have been especially gratified with the behaviour of the bona-fide working men. They are quiet, orderly and well-behaved in the extreme.

“They like to preserve their independence, they do not want charity, and it is a revelation to them to be able to sit in the smoking room and chat or to take recreation in the reading room instead of being obliged by force of circumstances to have recourse to the public house,” he said.

There were six galleries of sleeping cubicles in the six-storey building overlooking the former St Mary, Newington Churchyard. Each seven by six foot cubicle had a spring bedstead with hair mattress, two sheets, blankets and a quilt, a chair, a shelf, and clothes pegs.

On the ground floor was a dining room to seat 400 men, who could buy a hot meal for a few pennies or prepare their own meals at the large range. There were lavatories and baths in the basement and even a barber and a tailor down there too.

There was a full staff of scullery maids, cooks and bed-makers but all women were kept far away from the male lodgers. The bed-makers were not even allowed to enter the hostel until the lodgers had left for the day and an iron gate locked behind them.

There was a shop to buy basic food items on the cheap and a reading and smoking room for passing the time outside of the public house.

There were nearly two hundred men dining at the Newington Rowton House on the Christmas Day after it opened – who bought a turkey dinner for eight pence and a plum pudding for a penny.

A newspaper reporter who was present wrote: “There was no ceremony or speeches at the festive tables. The lodgers came in when they felt inclined and after their meal went to the reading or smoking rooms.

“Several of the older lodgers acknowledged that Rowton House was the best and cleanest place they had ‘dossed’ in since they left their homes.”

The enormous sanctuary for the working man was later turned unto the London Park Hotel in the 1970s. After its closure in the 90s, it returned to almost its original purpose when it was used to house refugees and asylum seekers before it was ultimately demolished in December 2007.

With thanks to the Southwark Local History Library