The forgotten story of Hussein Hegazi: The Dulwich Hamlet FC striker who became ‘the Father of Egyptian football’

Fan favourite was one of Egypt's greatest ever players 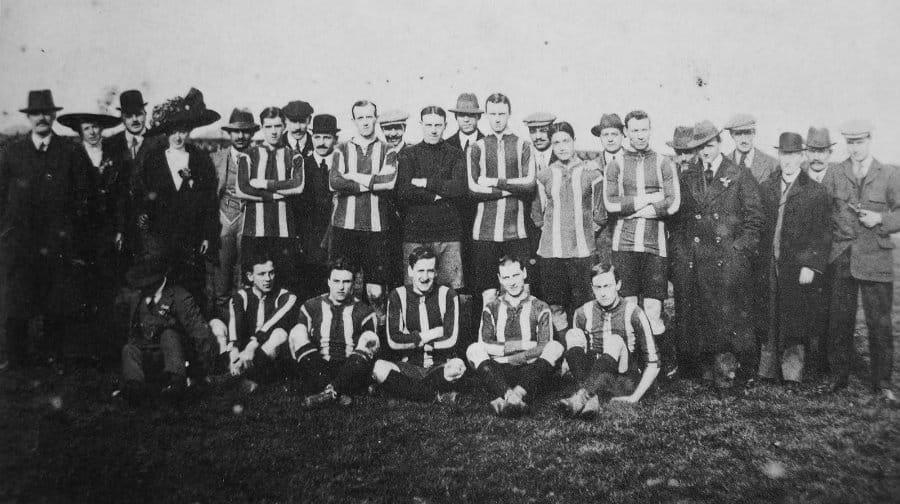 Hossein Hegazi (third to the right from centre) with the Dulwich Hamlet team on a tour in Holland, at Easter 1912

There is a road in downtown Cairo, just a long goal kick from the banks of the Nile, named after a long-forgotten Dulwich Hamlet player.

Hossein Hegazi Street was the site of a number of protests during the Arab Spring in 2011 and again earlier this summer, but the remarkable history of the street’s footballing namesake began over a century ago in the leafy confines of Champion Hill.

Jack McInroy, known as the ‘Hamlet Historian’, told the News: “I was doing some research in the 1990s and came across a line about Hussein Hegazi, an Egyptian striker. I had been supporting Dulwich Hamlet since 1981 and had never heard of him.”

Jack scoured newspaper archives for old match reports and was surprised to find accounts of an extraordinary talent and character – but mystery surrounded Hegazi’s life after Hamlet.

At a loss, he finally rang the Egyptian embassy in London, with little hope that they would have any information on a pre-war amateur footballer plying his trade in a south London suburb.

He said: “The man on the phone told me ‘Hossein Hegazi is one of Egypt’s greatest ever players.’ I couldn’t believe it! I thought: why don’t we know more about this guy?”

Hussein (with the hat on in the back row) with the Millwall Reserves team, also in autumn 1912

That Hegazi was forgotten about by Dulwich fans for so long is a travesty, for his story is as dramatic as any in the club’s long history. As a teenager in his small Egyptian town of Kremlah, Hegazi reportedly practiced his accuracy by seeking out peasants carrying jars over their heads.

The routine that followed rarely altered: Hegazi would take pot-shots from afar, the jars would smash, the women would erupt and Hegazi’s wealthy – and apparently patient – parents would stump up some compensation.

He arrived in London in 1911 to study engineering and was quickly snapped up by Dulwich Hamlet. He was a novelty in more ways than one. While he was Hamlet’s first African player, the young striker was also lithe and quick, a stark contrast with most centre forwards at the time who were built like (and played with all the subtlety of) a brick outhouse.

From the get-go he was a crowd favourite, slaloming his way through opposition defences with an ease that bordered on disdain. Match reports in the local press were admiring: “a shining light”, “splendid”, “wonderful.” It was no surprise when professional clubs came knocking.

Just weeks after making his Hamlet debut, Hegazi was invited to play a Football League match with the professionals at Fulham. True to form, he found the net at that level too, scoring on his debut in front of a delighted Craven Cottage crowd. He was immediately invited to join up with the club the following weekend but declined, preferring to reward Hamlet’s faith in him.

Hussein (back row, right of centre) with the London FA team in 1911

He said: “I was in a difficulty. For I wanted to play very much in League football, and at the same time I did not want to leave Dulwich Hamlet who have been very good to me. So I have decided to play for the Hamlet. I am sorry if Fulham are disappointed.”

A war of words broke out between the two clubs, with each side accusing the other of ruining the spirit of the game. The end result, however, was that Hegazi was staying with the pink and blues. He spent three seasons at Hamlet, interspersed with spells with the London FA XI, the University College London team and Millwall Reserves.

Incredibly he won no trophies during his time in Dulwich, but he did enjoy success on the club’s frequent tours abroad, which included a famous victory over the Dutch giants Ajax Amsterdam. In 1914, with the rumblings of war growing, Hegazi left Dulwich and returned to Egypt.

He arrived a star and is today seen as responsible for the escalation of one of world football’s most passionate rivalries: the cross-town Cairo derby between Al Ahly and Zamalek. Somewhat bizarrely, given his loyalty in England to Dulwich, Hegazi flitted back and forth between the two teams seemingly on a whim, once leaving Al Ahly because their new stadium didn’t have a bar area for him to play billiards in.

There are reports of hordes of fans following him from club to club, with each move switching the rivalry’s intensity up a gear. His influence cannot be understated, and as the rivalry grew, so did the sport in Egypt. While he may now be known across Egypt as ‘the Father of Egyptian football’, it is heartening to see that he is also once again regarded as a hero in Champion Hill too.

Thanks to Jack McInroy of www.TheHamletHistorian.blogspot.co.uk