The hidden bomb that killed 18

An official enquiry was held at Southwark Town Hall and the Civil Defence Forces were exonerated from all blame and praised for their heroic rescue attempts. 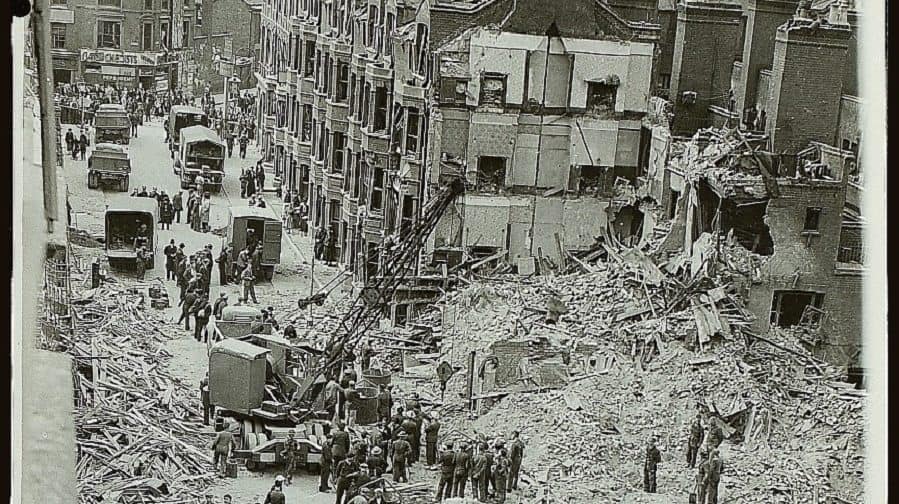 From the Ministry of Home Security's Research and Experiments Department report into the Gurney Street explosion. Printed courtesy of National Archives.

At 9.30pm on Saturday, June 6, 1942, a large explosion was heard in the Elephant and Castle area, writes Neil Crossfield…

The explosion demolished four blocks of flats and damaged many others.

According to the official Ministry of Home Security report, eighteen people were killed, 62 were seriously injured and 72 were slightly injured.

Among the dead were six children under the age of ten, who eyewitnesses report had been playing cricket in the street just before the explosion.

Their bodies were found close together by rescue units who had been summoned to the scene.

Newspapers at the time report scenes similar to a mining disaster with families congregating at cordons set up by the home guard, with people desperate to hear any news of their missing loved ones, whilst a massive operation was carried out.

A new mobile sound location unit was used in an attempt to locate any possible survivors trapped in the rubble.

As no air raid warning had sounded that evening, the idea soon circulated that this had been caused by an unexploded bomb.

Anger was directed towards the Civil Defence Services for their failure to identify this danger, which the later official enquiry recorded as being a 1000kg G type parachute mine which had lain undiscovered since when it was dropped on the last night of the blitz, May 11, 1941.

This had pierced the wall of number six Gurney Street but had not exploded.

However, air raid wardens at the time believed that a 50kg high explosive bomb had exploded and caused the damage.

After the raid the building had been demolished and the debris had been back filled into the crater, unwittingly covering up the mine.

An official enquiry was held at Southwark Town Hall and the Civil Defence Forces were exonerated from all blame and praised for their heroic rescue attempts.

However, after this event, further guidance was issued to all Air Raid Wardens about the need to carefully assess their bomb damage reports to minimise the risk of such an event happening again.