The history of Walworth’s World War One street shrines 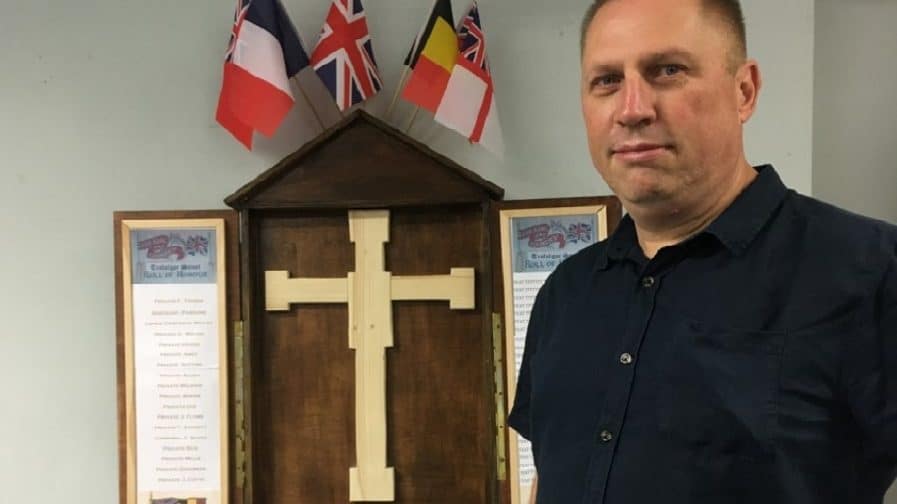 Neil and the recreated street shrine

Nowadays we are used to seeing flowers placed at a crime scene or road accident, or the sight of a white “ghost bike” at the place where a cyclist has been killed, writes Neil Crossfield…

However, these local acts of remembrance are not a new phenomenon.

War memorials, remembering those who fell in the two world wars, are a well-known and permanent feature in many British towns and villages, but few people are aware of the street shrines which were created whilst the ‘Great War’ still raged.

Research has shown that several of these existed in Walworth, in streets such as Larcom Street, Date Street and Olney Road.

However, the most notable was perhaps the one in Trafalgar Street, where, from around one hundred and sixty houses, over three hundred men had joined up to help the war effort.

The Trafalgar Street shrine paid homage to the eighteen men who had made the supreme sacrifice and also contained a roll of honour of those still serving.

The first shrines had appeared in south Hackney, east London, around April 1916, but the movement rapidly spread throughout the country during the summer of 1916, following the momentous battles of Jutland and the Somme.

Once dedicated by local clergy and dignitaries, these would be maintained by the local community who would ensure that the shrines were properly cared for.

Fresh flowers would be placed daily and locals would display photographs of their loved ones next to those of the Royal family, military leaders and the flags of the Allied forces.

The shrines became both a focal point for local commemoration, for those that had fallen, and perhaps more superstitiously, as a good luck charm for those still fighting.

However, there is evidence that they eventually fell out of favour, due to real difficulty in keeping them up to date, due to the high number of casualties

The Church of England helped develop the movement, and no one person more so than the Bishop of London, Arthur Winnington-Ingram.

He was an enthusiastic supporter, who saw the conflict as a holy war.  Whilst dedicating a shrine in East London he had said, “This nation had never done a more Christ-like thing than when it went to war in August 1914”.

So, whilst the shrines may have offered comfort to the bereaved, they no doubt fulfilled another role, that being to ensure that all eligible men would do their patriotic Christian duty and sign up to fight.

The Church was not alone in promoting the shrines, the Evening News newspaper actively campaigned for the nationwide erection of them and held an exhibition of potential shrine designs at Selfridges Department store in Oxford Street.

The famous store contributed £150 campaign and also offered to pay for the erection of all shrines within a mile of its store.

It is not known what happened to the Walworth shrines after the war as they were soon replaced by more permanent memorials in the 1920s.

The shrine movement was extremely popular around the country during the First World War but now has largely been forgotten until now.

As part of this year’s Walworth History Festival, a replica shrine will be recreated and displayed at the Old Newington Library from September 15-23.

Neil Crossfield, a Walworth resident and member of the Walworth Society, has become a community researcher for the Walworth History Festival.

Neil spent 30 years in the London Fire Brigade before retiring two years ago. He is now studying for a history degree at Goldsmiths University.

“I’ve always been interested in history but the history festival has given me a chance to do some proper research about my local area,” he says.

“I’m currently planning a project which aims to remember the huge number of Walworth men killed during the First World War and will be looking for other people who have an interest in their local heritage and want to get involved.”