The incredible story of one man’s war, pictured in the ruins of London Bridge 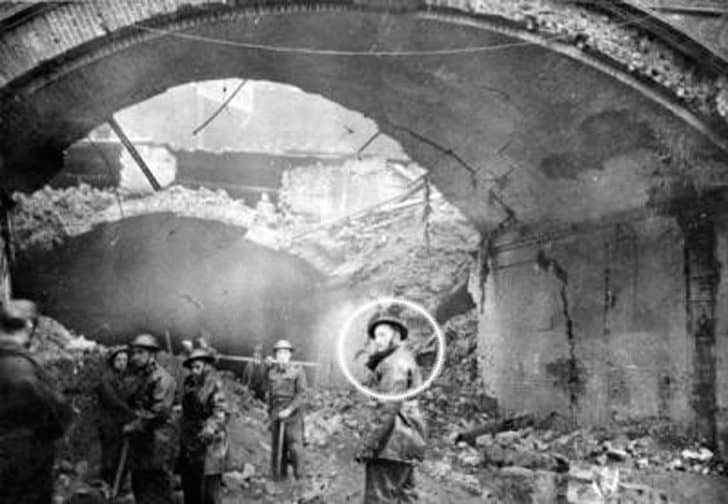 ?Jim Smith (circled) is the one standing in the aftermath of the bombing

As the poppy appeal is launched to remember the fallen soldiers of previous conflicts – the News delves into its archives to re-tell the horror of the Second World War for the people of Southwark.

In 2011 nearly 70 years to the day a bomb destroyed Stainer’s Street Arch at London Bridge Jim Smith then aged 90 re-told us his story;  “I’ll never forget that awful sight,” he said.  “Two little girls had been killed in the blast, and their little bodies were just lying there charred. I still get tearful thinking about it now.”

For Bermondsey-born Jim it still felt like yesterday, so vivid were his memories of the bomb that landed on the arch in Stainer Street. He is pictured here (circled in main photo) standing in the aftermarth of the bombing.

On February 17, 1941 – one of the worst nights of the Blitz – 300 people crowded into the arch to shelter, sealed in by a pair of ten tonne steel doors.

At 10.25pm, a high explosive bomb burst through the ceiling and exploded. In the horror that followed, 68 bodies were recovered and 175 people were injured.

When Jim arrived the next morning, he saw a devastating scene.: “I’d been on duty all night as an air-raid warden, helping people to the nearest shelter and doing first aid. It was one of the worst nights during the war. I saw so much destruction and death that night in the Old Kent Road area. The cellarmen who worked in the Stainer Street arches on an outing to Southend in about 1944. Jim is fourth from right on front row (circled).

“In the morning, I came back to the Stainer Street arches where I worked as a cellarman during the day – I worked for B.M.& J. Strauss, and there was a tannery next door us.

“The arch was being used as a shelter for people who’d been bombed out of their homes, but despite the hardship, I’d never heard a complaint from any of them. At night they would have a sing song, and even neighbours who normally quarreled became friends.

“When I got there, I saw that a bomb had gone through the roof of the arch. The blast had been so strong that two iron doors that covered the arch had been sucked in, crushing people.

“Ambulances, police, the emergency services were all there. In the photograph, I had just arrived at the scene. I think I’d only had about an hour and a half’s sleep, but I was soon given a shovel and set to work again.

“I had got to know many of the people that used the shelter as a permanent home after losing theirs, and that made it more horrible for me. I was only 20 at the time.

“The night before the bomb was dropped, I got my call up papers, and two weeks later I joined the Worcestershire Regiment, and became a radio operator in the Royal Corps of Signals. I didn’t know it then, but I was fated to take part in the D-Day landings.

“I remember the build up to D-Day – we were concentrated for some weeks in the New Forest in Hampshire. There were a variety of nationalities among the troops and there were folding canvas beds to sleep on. We were briefed continuously.

“On the morning of June 6, 1944, I was sealed into an American Tank Landing Craft  with all the heavy radio equipment on the back of a jeep. The vehicles were all waterproofed and equipped with snorkels so that they could go in fairly deep water.

“I couldn’t see anything, but I could hear water bubbling and guns firing all around like thunder. It was the sound of the naval guns. I can’t swim and I’m very claustrophobic, so it was scary.

“When the door of the landing craft opened, I looked up and the skies were black with planes. It was a horrendous experience.

“We landed on Gold Beach, Arromanches, Normandy, at about 10 a.m. It was our job to go to whoever was in action and send messages back to 30 Corps H.Q. Afterwards, we carried on moving through France.

“I remember one day we came across two deserted tanks. When I looked inside, the bodies of the soldiers were still in there and the maggots had set in.

“We often had to cover our jeep with bushes to hide from the Germans. One night we stopped to stay in a farmhouse. There were chickens running around, so we thought we’d catch one and eat it, but in the end none of us could bring ourselves to kill the chicken. I can laugh about these things now, though at the time it wasn’t so funny.

“In December 1944, I was sent back to England from the borders of Germany. I was given 28 days leave to get married, before being sent to India, Burma and Sumatra. After the war, years later, I tried to go back to the arch on Stainer Street. Once I even got on the bus to go there, but I just couldn’t face it. To this day I’ve never gone back.” TOP: Jim Smith was living in Brisbane when he got in touch with the News to tell us his incredible story
ABOVE: Jim Smith on his wedding day,
January 13, 1945

In 2003 the News inconjunction with the Southwark Heritage Association and Southwark Council erected a Blue Plaque on Stainer’s Street – now part of London Bridge’s revamped station – to ensure all the victims would be remembered forever more.

Below is the touching poem Jim wrote to the paper back in 2011.

Dear Southwark News
I got out of bed this morning and looked at the poem, as I have done every morning for many years since I wrote it after my experiences in Europe,India, Burma & Sumatra (WW2). Here is the poem:

The memories of my fallen mates,
Whose lives could not be saved,
And the guilty feelings that I had,
When I returned unscathed,
No one will know the anguish,
That I will always bear,
Or the many hidden tears I’ve shed,
For the mates I left back there!!
Jim Smith (C) 1949

Southwark NewsHistoryThe incredible story of one man’s war, pictured in the ruins of London Bridge