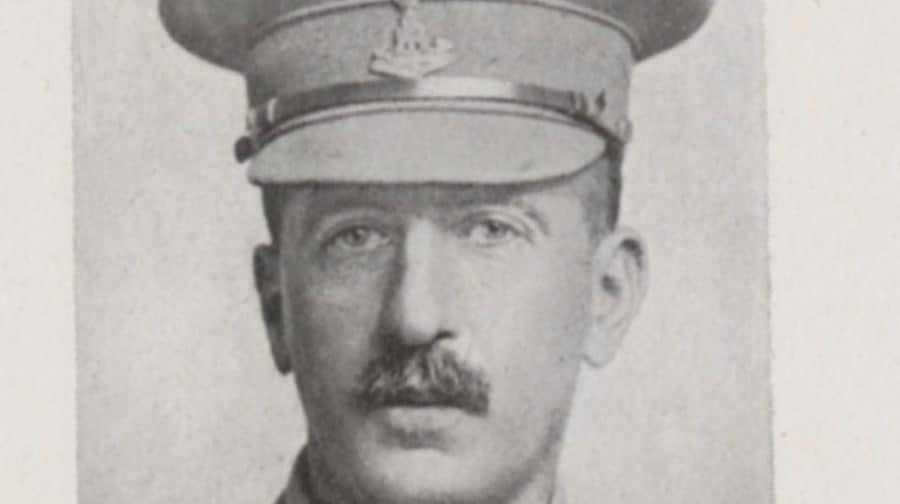 Saturday 1st of July 1916 started as a pretty normal day in Southwark. Nearly two years had passed since war had been declared and London had settled into some sort of routine, writes Southwark historian Neil Crossfield… 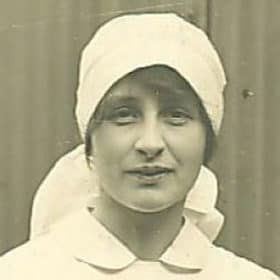 A young Red Cross nurse named Vera Brittain, based at No1 General Hospital Camberwell, arranged to go to Southwark Cathedral that afternoon, for a performance of Brahms’ German Requiem, despite the fact that earlier in the week, The Globe newspaper had questioned why the concert included ‘enemy music’.

Two boxers, ‘Fighting’ Bob Spencer and Petty Officer Jones of the Royal Naval Division nervously prepared for their sixteen-round bout at the Ring boxing venue in Blackfriars Road and other people were making plans to go to the whist drive at the Masonic Hall, Camberwell New Road.

Yet some 200 miles away, across the channel in the Somme region of France, the day saw the start of a monumental struggle which has gone down as the costliest in British military history.  Around 07:30 hours that morning, many large mines were detonated, whistles blew and thousands of men ‘went over the top’, only to be mown down by machine guns and artillery fire.  By the end of the first day, British casualties numbered 57,470 and 19,240 of these men had been killed.  Like all parts of the United Kingdom and the wider British Empire, Southwark played its role and around 90 men with a connection to the borough were recorded as dying on that day.

Press restrictions under the Defence of the Realm Act meant that the huge losses would not have been mentioned in the national and local press.  While initial newspaper reports were positive in nature, anyone who lived in London would have soon realised that something dreadful had happened.

By Monday 3rd of July, the hospital trains began to arrive in the London railway terminals.  Troops who had survived their battlefield injuries and initial treatment at a casualty clearing station in France were sent back to ‘Blighty’ to receive further care.  London Bridge Station would have been a key point for injured soldiers passing through to one of the many military hospitals established within London.

On Monday afternoon, Vera Brittain had written to her mother and said that No1 General Hospital had been put on standby to receive 50 officers and 100 men. The first of these arrived on the morning of the 4th of July and she later wrote that these convoys arrived without cessation for about a fortnight. Expecting large numbers of casualties, temporary huts had been erected in the grounds of the hospital.  The one the young nurse was assigned to, designed to accommodate 40 casualties, was filled beyond capacity with acute surgical cases by that evening.

Much has already been written about this awful day and our thoughts, perhaps understandably, often concentrate on the huge number of casualties. These terrible statistics still shock today but it is easy to forget that each of the almost 20,000 who were killed were individuals, all with families and friends mourning their loss. This article looks at the stories of just a few of the Southwark men who died on that fateful day. 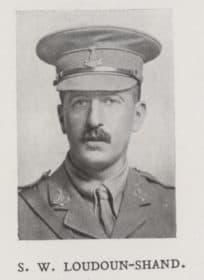 Whilst the carnage of the 1st of July is etched into our collective memory, it should be remembered that the Battle of the Somme continued until the 18th of November.  During this period, British Empire forces suffered around 420,000 casualties, French forces 200,000 and the German losses were estimated to be around 450,000.  In the 141 days the fighting raged, around 131,000 British soldiers had died and when hostilities ceased, the allied forces had only advanced around seven miles.

One of the most notable deaths on the day was that of Major S.W. Loudoun-Shand of the 10th Yorkshire Regiment. Though born in Sri Lanka, he had a close association with Southwark having attended Dulwich College; as did five of his brothers. His father lived in Alleyn Park, Dulwich.  Loudoun-Shand had served in the Boer War before working on tea plantations in Sri Lanka.  When war was declared he returned to England to re-enlist.  He was one of nine people who would be awarded the Victoria Cross on the day.  He was not the only ex pupil of Dulwich college who died this day, as 20-year-old 2nd Lieutenant Frederick Cyril Stowell Volkers, of the 1st Rifle Brigade also fell.  He attended the college from 1907 until 1914.  A keen sportsman, he played rugby for the 1st XV in his final year and was one of six boys from this team who were killed during the Great War.

Corporal John Sidney Clark of the 8th Battalion, East Surrey Regiment, was 33 years old when he died.  In civilian life he had been a coal dealer and was married to Bridget Clark.  The couple lived in Abbey Street, Bermondsey.  The East Surrey’s actions on the 1st of July have gone down in legend, as this was the unit which went ‘over the top’ kicking footballs towards the German lines.  A Captain of the 8th Battalion, W.P. Nevill, had bought these balls and on one of these had written, ‘The Great European Cup-Tie Final.  East Surreys V Bavarians. Kick off at zero’ and on the other, ‘NO REFEREE’.  Nevill had offered a reward to the first platoon to reach the German lines, unfortunately, whilst this was no doubt a brave attempt to relieve his men’s nerves, Nevill and many of his men were mown down as they left the trenches. It is impossible to know what part, if any, John Sidney Clark played in this historic act of bravado but it is highly probable that he would have known that this was planned. 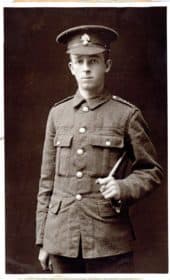 Leonard Charles Shinkfield, a private in the London Regiment (Royal Fusiliers), died taking part in fierce fighting around Gommecourt on the first morning.  This was a diversionary attack by the 56th (London) Division and had been largely successful with troops capturing the German front line trenches.  He had lived in Dulwich and attended Alleyn’s school with his two brothers, Eric and Herbert.  1916 would be a terrible year for his parents, as just a month before he died, their youngest son Eric had been killed near Hebuterne.  Losing two sons in such a short time was compounded by the gassing of Herbert, their remaining son, later that month.  Such was the extent of his injuries he was invalided out of the army.  In some ways this might have been seen as a blessing to his parents.

At least two of the men who died on this day had found themselves fighting against the country their father had been born in.  Eric James Arlitz had been born in Bermondsey and is shown on the 1911 census as being a boot salesman.  His father, William John Arlitz had been born in Hamburg in 1865 and had later run a newsagent in the Old Kent Road.  He had two other brothers who also served but these survived.  Eric died serving with the 2nd Battalion Middlesex Regiment.

Another man, Private Frank Fanning of the 1st Hampshire Regiment, had been born to Albert Fanning, a German national, who was employed as a waiter in a private club.  His parents lived in 7 Hayles Buildings, St George’s Road.  This would have been a tragic day for this family, as his sister, Lilly, also lost her husband: Company Sergeant Major John Tonge of the Royal Irish Rifles on the 1st of July.    Whilst many Germans had settled in London throughout the 19th century and had fully integrated into British society, there had been widespread anti-German sentiment at the beginning of the war, and it is not difficult to imagine that these men would have faced difficulties when they enlisted.

Such was the scale of the battle that it was often difficult to ascertain what had happened to individual soldiers and families would often have to wait weeks or even months to find out the fate of their loved ones.  For Example, when James Frederick Radley was killed fighting with the 2nd Middlesex, in the attack at Mash Valley near Ovillers, his official notification of death did not arrive until the 5th of December 1916.  Stories like Radley’s were not uncommon, for his unit alone suffered 650 casualties on that day.  Troops would initially be posted as missing but as time went on, chances that they would be found alive diminished.  It is telling that the names of some 48 men from Southwark who died on the 1st of July can be found among those carved on the Thievpal Memorial, built to commemorate the 72,337 men who had no known grave.

While many would have feared the worst, they often clung to the vague hope that their son had been taken prisoner or was still alive.  A particularly sad case is that of Frederick George Marshall, a 20-year-old trainee draughtsman serving in the Royal Engineers.  He had suffered a gunshot wound and had been seen in an advanced dressing station on the 1st of July.  However, several personal items of his, including a luminous watch, a bible and personal letters, had not been sent back to his parents as per the usual procedures on the death of a soldier.  His father sent an extremely poignant letter to the war office in November 1916, in which he suggested that the failure to return these items was an indication that his ‘darling son’ was still ‘alive and well’.  The unfortunate truth was that sometimes the personal effects of casualties would be stolen by unscrupulous medical staff, and this may have occurred in this case.  The poor man signed off his letter, ‘I remain yours, nearly mad with trouble’.

While the death of a soldier was heart-breaking, the loss of the main breadwinner could also result in severe financial hardship for his wife and family.  Ernest Leopold Clift, a leather dresser from Bermondsey, died fighting with the 3rd Royal West Kent regiment.  He left a wife, Louisa and four children under the age of six.  Clift had enlisted on the 1st of September 1914 and from this point, Louisa would have been only entitled to a separation allowance of 7s. 7d. and 1s. 2d. per child per week.  His youngest son, Albert, had not been born until March 1915, so Louisa would have had to manage on around eleven shillings a week.  Considering that around this time, even a general labourer working in the docks could be expected to receive around 35 shillings a week, this created huge difficulties.  Once a husband was killed, his widow could receive a pension, but this was not automatically given.  Louisa received his notification of death on the 24th of July and then would have had to jump through several administrative hoops.  The separation allowance would have continued for six months.  She would have to provide copies of birth and marriage certificates and get this verified by a JP or a police officer above the rank of sergeant.  Records show that she was finally awarded a pension of 22s 6d a week from the 22nd of January 1916.

Times must have been hard for Louisa as in November 1916, she had written to the war office thanking them for returning the parcel containing ‘the few things of my husbands’ but then asking if they could also send on his will book as she was sure there were ‘a few shillings of his pay’ that she could use. She then related that one of her children had lost the sight of one eye after an accident with a gun.

Both the pension and separation allowance could be forfeited, if the bereaved woman’s behaviour were deemed to be immoral or reprehensible.  Life in the trenches of the Western Front could be terrible for soldiers serving in the army but it is easy to forget the struggles of their loved ones left behind in England.