It took the reverend and his volunteers three years and four months to take down and transport all 125,000 bricks, 200 tons of stonework, and the roof timbers to Kent 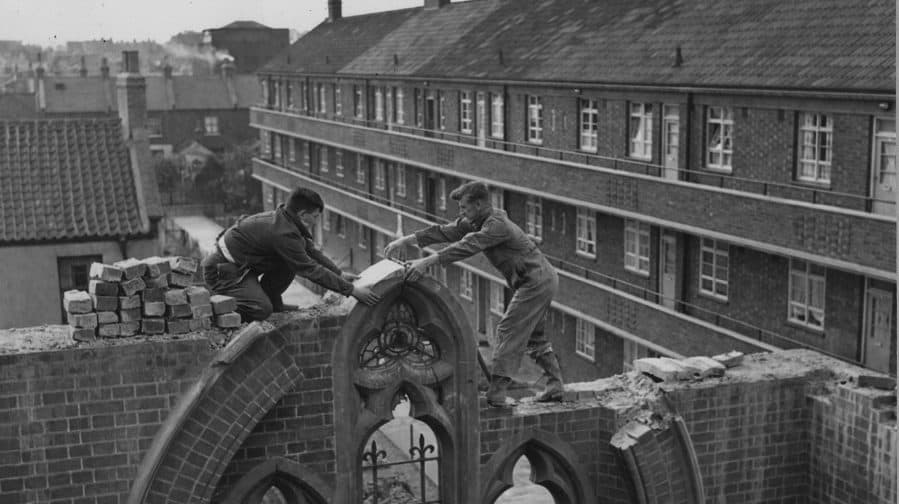 On Saturday, April 13, worshippers and history enthusiasts will meet at Peckham’s Davey Street at 9.15am and begin an eight-hour walk to Biggin Hill.

They will retrace the steps of the Reverend Vivian Symons, who took an abandoned church from north Peckham and lovingly rebuilt it to serve his growing congregation after the Second World War.

In the early 1900s Biggin Hill was a small village of around 200 people.

A temporary corrugated iron ‘Tin Tabernacle’ had been erected, with a view to build something more suitable at a later date. By the early 1950s, the increasingly suburban area had become famous as the home of the Royal Air Force – and its population had swelled to some 4,000 people with an increasingly dilapidated place of worship.

That year, Vivian Symons, from Cornwall, arrived at the church as its ‘perpetual curate’.

Fifty years of fundraising had, so far, only yielded £2,600 and, after wartime hardship, further significant funds to build a permanent structure were looking unlikely.

But until the village had a permanent church, Biggin Hill would technically remain ineligible to become a parish.

Symons decided the only way forward was to dismantle an old, redundant church elsewhere, and rebuild it.

As it happened, there was one such candidate on Old Kent Road – All Saints.

The Victorian church in Peckham was derelict after being bombed during the Second World War.

After being spotted by Symons, it was decided the unsafe but impressive Victorian building would provide the perfect materials for the new St Mark’s.

On August 12, 1952, Symons drove to Peckham in a Morris lorry with a builder and began the herculean task of dismantling the building. It took the reverend and his volunteers three years and four months to take down and transport all 125,000 bricks, 200 tons of stonework, and the roof timbers to Kent.

In all, he drove a total of 30,000 miles back and forth transporting the building, and became a familiar sight in Peckham.

His endeavour was closely followed by the press, and stories of the ‘moving church’ travelled across the world, helping to double the rebuilding fund with wellwishers’ donations. By 1958, the rebuilding fund had doubled and a local building company, Durtells, stepped up and offered rebuild the church in its new home on a no-profit basis. The reverend, at work

The new building was a blend of old new, with Symons continuing to lend a hand. He even used a dentist’s drill to etch the church’s new windows.

On Saturday, April 25, 1959, the new church bells rang for the first time, and the permanent St Mark’s Church was consecrated by the Bishop of Rochester. Biggin Hill had finally become a parish.

In 2007, St Mark’s became a Grade II listed building, an accolade conveyed in part due to its incredible story of faith and endeavour.

The walk will commemorate the 60th anniversary of his incredible feat, and follow the route taken by Symons and his volunteers.

Starting at Davey Street, they will follow the path of the old Surrey Canal through to Rye Lane, Peckham Rye Common,Brockley and Honor Oak, and on to Biggin Hill via Catford, Lower Sydenham, Beckenham, Hayes and Keston Common.

Organiser Mark Newman said: “We are aiming to celebrate the 60 years of St Mark’s Biggin Hill by retracing the route from the physical location of All Saints North Peckham to our current site.

“Having advertised the walk from North Peckham to Biggin Hill, several neighbours and friends have made contact asking to join the group.

“We are keen to widen the St Mark’s community through a fun event – though after seventeen miles it may not feel that way!” Having just read this story regarding the bombed church in Peckham being moved to Biggin Hill – i was married in this church back in 1974. Had no idea of its history.