'This was a truly global conflict and Walworth men are recorded as dying in places as far afield as Greece, Turkey, Israel, Pakistan, Syria, Russia and Iraq' 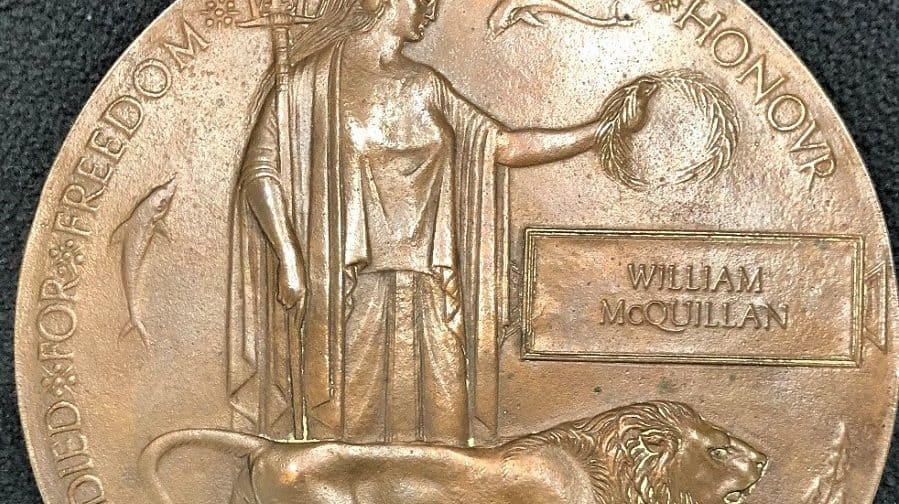 A memorial plaque to commemorate Private William McQuillan, a Walworth man, who died fighting with the 1st 24th London Battalion (The Queens) at the Battle of the Somme.

Walk through most English villages and towns and you’ll probably see a war memorial commemorating the local people who have died fighting for their country, writes Neil Crossfield…

These monuments have become important local focus points for remembering.  Yet while carrying out research for their recent History Festival, members of the Walworth Society realised that there was little in the local area to recognise the sacrifices made by the Walworth men in World War One.

Aiming to redress this, the Walworth Society, in conjunction with students from Goldsmiths University History Department, have been working hard to produce a temporary monument to the fallen of Walworth in time for the Armistice celebrations next Sunday.

Using the Commonwealth War Graves Commission website, they have identified the names of over 800 men with a direct connection to Walworth.

They have reason to believe that this figure may be much higher, but far more research needs to be done to confirm the actual number.

A long banner identifying these names will be displayed in the recently reopened memorial garden in front of the old Southwark Town Hall in Walworth Road.

Information boards will attempt to show, in some small way, the impact the war had on the area, and people will be able to look up further details of the men on a website.

The location chosen to display this is particularly poignant as it was in this building that many of the men would have enlisted to join the forces.

Photographs taken at the time show crowds of smiling men queuing outside of the town hall. We do not know the fate of these men.

Whatever their motivations for enlisting, the men of Walworth joined up in their thousands and many of them paid the ultimate sacrifice.

A preliminary study of the data base throws up hundreds of interesting and moving stories.

The war impacted on all generations; among the dead are four sixteen year olds and at the other end of the scale we find a 59 year old.

The first casualty is recorded at the Battle of Mons just 20 days after war was declared on August 4, 1914, with the last man being recorded as dying in Iraq in August 1921 as the global conflict rumbled on after the fighting in Europe had ceased.

When thinking of World War One, people’s thoughts instantly go to the muddy battlefields of France and Belgium, but this was a truly global conflict and Walworth men are recorded as dying in places as far afield as Greece, Turkey, Israel, Pakistan, Syria, Russia and Iraq.

The majority of the men served in the army, but they also joined the Royal Navy, The Merchant Navy and even the fledging Royal Flying Corps.

Walworth men were present at every major battle in the war including Neuve Chappelle, the Somme and Passchendale.

Three local sailors died together when “HMS Queen Mary” was sunk during the Battle of Jutland.  Many others lost their lives on the beaches of Gallipoli, including Sergeant Frank Edward Stubbs, who won the Victoria Cross for his gallantry.

At least ten pairs of brothers were killed and perhaps the saddest example of this is that of the two Freeman brothers of Rodney Road, who died within a month of each other in 1916.

Another tragic story is that of Henry Charles Brutus Taylor, a nineteen-year-old who died in a German Prison Camp on the very day that the fighting in Europe ended.

Every name recorded on the memorial has its own heart-breaking tale attached to it and, although some of these stories may never be fully known, the Walworth Society and the people of Walworth are determined that their names should never be forgotten.

This memorial is seen as just the starting point for a larger project to properly commemorate Walworth’s role in the First World War and the organisers would love to hear any memories people have about relatives who fought in or were affected by the conflict.

A small opening ceremony is planned to take place at 11am on Saturday, November 10, in the memorial garden outside of the Old Southwark Town Hall and all are invited to attend.