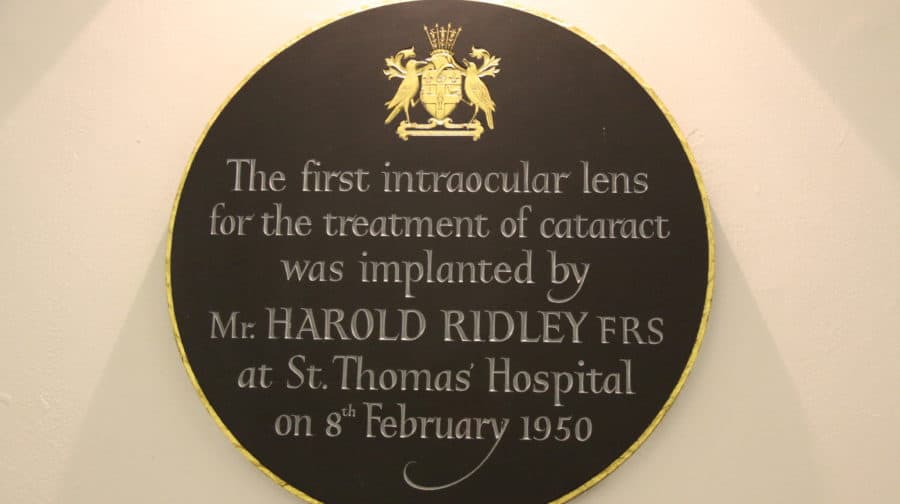 This month marks the 70th anniversary of the first successful cataract surgery in the world, an operation carried out by Sir Harold Ridley at St Thomas’ Hospital on February 8, 1950. It is estimated that more than 200 million people’s sight has been saved since.

One of Sir Harold’s early patients, treated in 1956, says still owes his sight to the pioneering ophthalmologist. Jeffrey Wright, now 80, was given the lens implant operation when he was sixteen-years-old after his right eye had been damaged in an accident while playing darts. The injury led to him developing cataracts; a clouding of the eye’s lens which causes vision loss.

The retired electrical engineer from Milton Keynes remembers: “Initially I was told by my local hospital that I’d never be able to see with my right eye but my mum refused to accept that. We were eventually referred to Sir Harold Ridley at St Thomas’. What he was doing wasn’t widely known about then but he said he could help me.

“By then the lens in my eye had gone opaque and my vision had started to get worse. Once my lens had been removed and the new one was inserted my vision was brilliant – and it stayed that way for 30 years.”

By 1986 the artificial lens had started to rub against Jeffrey’s cornea. It was removed at St Thomas’ and he was given a corneal graft and a set of contact lenses to retain his vision.

“The team was amazed that the lens Sir Harold put in was still there,” he says. “I’ve done very well with my sight for so long. He was a brilliant surgeon. I would have completely lost my vision in my right eye without him.

“It was great my mum pushed for treatment because my life could have been very different without vision in one eye. Sir Harold was a pioneer – now so many people have the operation each day thanks to what he discovered.”

Throughout history there had been various attempts at fixing the common sight problem. Cataracts generally appear in late middle age onward, and are caused by dead cells turning the lens hard and opaque. If untreated they can cause total blindness.

Although removing the lens could allow light back into the eye, the lens is needed for focusing and so to see properly after surgery patients depended on glasses. And early surgery posed other safety issues.

After successive failures by medics throughout the 1800s and 1900s, it was believed to be an impossible task. The key problem for practitioners was that the eye rejected any foreign object used as a replacement lens.

Sir Harold, who hailed from Kibworth Harcourt in Leicestershire, was the son of a naval surgeon who had later specialised in ophthalmology. Remarkably, as a child he knew Florence Nightingale, a close friend of his mother’s.

Sir Harold’s breakthrough came when he treated a Spitfire pilot who had Perspex stuck in his eye during a stint working at Moorfield’s Eye Hospital. He realised that unlike most foreign bodies, the eye wasn’t rejecting the material. During World War Two he was based in Africa as a major in the medical corps, and put his idea of producing Perspex lenses on hold. In the Gold Coast, he also conducted research credited with improving the diagnosis of river blindness – onchocerciasis – caused by tiny worms in the eye.

After his return to England, he turned his attention back to cataracts and took his initiative further with help from a scientist business partner who had the technology to mass produce affordable Perspex lenses.

He began working at St Thomas’s in 1946; the hospital where he first trained as a junior doctor. Three years later became the first doctor to successfully implant an artificial lens in a patient’s eye.

At the time, it was a radical idea and, at first, many people in his profession were concerned. But by the 1950s he was so in demand that he regularly flew out to American to operate in New York and Washington at weekends.

At his retirement from the NHS in the early 1970s it was still a controversial procedure. But by the 80s it had become routine practice – albeit needing a one centimetre incision, stitches, and a two-week recovery.

After retirement Sir Harold continued working privately in Harley Street, and was eventually vindicated by the profession that had initially doubted him and was elected as a Fellow of the Royal Society in 1986. He even went on to have the pioneering treatment himself. Sir Harold passed away aged 94 in 2001, a year after receiving a knighthood.

Today this type of surgery is the most common eye operation worldwide. Technological advancements mean it can be conducted with just a two millimetre incision to insert the lens, which then unfolds within the eye. No stitches are needed and patients go home the same day – with some not needing to wear glasses after.

St Thomas’ hospital carries out more than 50 cataract operations a week, with each one taking just fifteen to 30 minutes. Around 350,000 are performed across the UK every year. It is also still our leading centre for cataract research.

Professor David O’Brart, a consultant ophthalmic surgeon, has been looking at the benefits of operating on both eyes at the same time, something not routinely offered on the NHS. It is hoped this can be introduced at St Thomas’ as his research shows it can increase productivity by up to 38 per cent and help patients recover faster and spend less time in hospital.

The head of St Thomas’ eye service, consultant ophthalmologist Mr Nigel Davies, said: “It’s always an honour to help patients, especially when it comes to saving their sight. There is something particularly special about doing that in the same place where Sir Harold Ridley invented modern cataract surgery.

“The eye team at St Thomas’ is very proud to carry on his legacy every day. Thanks to the procedure he developed, lives have been transformed across the world. His contribution to human health and wellbeing is enormous.”

Sorry to be pedantic but Sir Harold’s breakthrough patient was a pilot in a Hurricane plane, not a Spitfire.
I recommend that everyone reads Sir Harold’s Biography by David Apple.
(I am the daughter of a former Spitfire pilot).