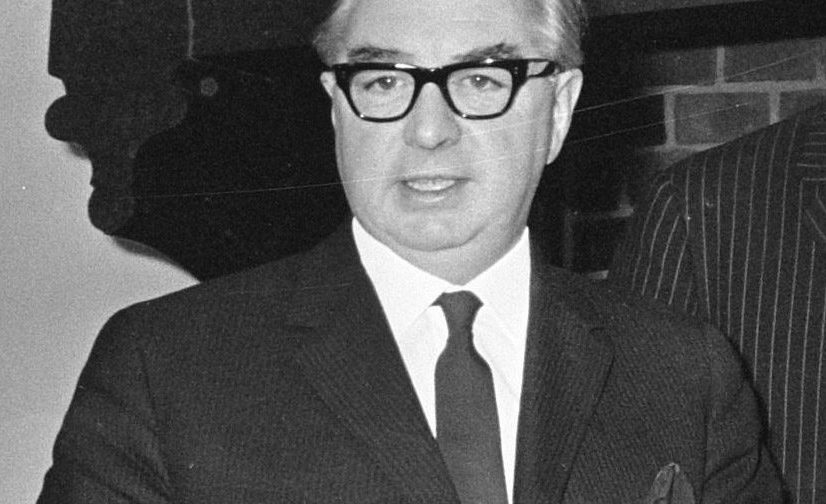 In the 1960s a gaffe-prone Labour MP and cabinet minister with a fondness for drink became a tabloid fodder favourite.

He was a statesman seen by some as the best of his party – and by others as a loose cannon who squandered his potential and resorted to bullying to get his way.

Although he spent most of his career as an MP for the Derby seat of Belper, he was born and grew up in Southwark – rising as high as Labour’s deputy leader under Harold Wilson and foreign secretary. George Alfred Brown was born in 1914, in Block I of Peabody’s Stamford Street tenement flats, to a working class family. His father, from Borough, was a truck driver.

Soon after his birth, the family moved Peabody‘s Blackfriars Estate.

Although academically gifted, Brown had to leave school at fifteen to help support his family financially.

A life-long Labour supporter and trade unionist, he later said at eight years old he given our Labour pamphlets in the run-up to the 1922 general election.

Brown joined parliament in 1945, after spending several years as an official in the Transport and General Workers’ Union.

As an official, he had attracted the attention of Clement Attlee while giving a speech at 1939’s Labour Party National Conference, attacking the far left-wing faction of the party.

At this time he was living in Dulwich, at Court Lane, with his wife Sophia Levene and their two children.

As an MP, he quickly was promoted from the backbenches to junior positions including as the oppositions’ spokesperson for defence.

Brown launched an unsuccessful bid for Labour leadership after Hugh Gaitskell’s death, and became deputy to Harold Wilson in 1960.

After Labour won back power, Brown was appointed as the first secretary of state for economic affairs, where as a pro-European, he played a pivotal role in the UK’s – rejected –  application the Common Market, despite internal opposition and vacillation.

From 1966 until his resignation in 1968 he was the UK’s foreign secretary, and thereinafter returned as a backbencher until he lost his seat in the 1970 general election.

Although they worked closely for many years, Brown and Wilson endured a particularly fractious relationship, with Brown allegedly threatening to resign from cabinet nearly twenty times.

For all Brown’s capabilities and success, he also harboured insecurities and resentment against what he saw as the leftist, middle class and Oxbridge-educated wing of the party.

But these qualities also resonated with voters who admired his conviction and willingness to wear his heart on his sleeve.

In 1966 he was appointed as foreign secretary, where he was responsible for the UK’s support of Resolution 242 of the UN Security Council, and one of its original authors.

Adopted in 1967, this landmark statement called for Arab recognition of the state of Israel’s right to exist, in exchange for Israel’s withdrawal from the occupied territories.

But his undoubtable talents and achievements continued to be overshadowed by frequent cabinet bust-ups and public gaffes. Brown attracted admiration and frustration from his colleagues in equal measure, with many perturbed by the effects of his well-known predilection for the bottle, famously alluded to by Private Eye, which coined the phrase “tired and emotional” for the MP.

Despite downplaying his drinking, Brown himself issued a public apology after he appeared on television visibly drunk whilst paying tribute to assassinated American president John F Kennedy.

One oft-repeated and likely apocryphal story involves Brown in his role as foreign secretary asking a woman to dance during a glitzy ambassadorial visit to Brazil.

The reply came: “There are three reasons why I will not dance.  Firstly you’ve had too much to drink, secondly it isn’t a waltz – this is the Peruvian national anthem and we must stand to attention – and thirdly, I am the Cardinal Archbishop of Lima.”

Many said although dubious, the story was somewhat believable. Brown is also said to have once curtseyed to Princess Margaret and been unable to get back up and been embroiled in literal Westminster punch-ups.

After numerous threats he eventually did hand in his notice, quitting two years later in 1968, after a set-to over not being invited to an emergency Privy Council meeting.  It was rumoured he was excluded because he was drunk.

Brown spent the next two years as a backbencher, until losing his seat to the Conservatives in 1970, with a majority of over 2,000.

He spent much of the rest of that decade increasingly at odds with the party to which he’d dedicated his life and career.

In 1976 Brown, by now a member of the House of Lords and increasingly embittered, he gave a speech quitting Labour.

“This is the saddest night of my life,” he told reporters. “After 45 years I’ve left for the same bloody reasons I joined”.

On his way out, he famously stumbled and fell into the gutter in front of a cohort of paparazzi.

The day after The Times memorably wrote: “George Brown drunk is a better man than the Prime Minister sober”.

It later became apparently he was a signatory to the Limehouse Declaration, had joined the newly formed Social Democratic Party, along with his brother Ron, who had also been a Labour MP and pro-European.

During this time his 45-year-long marriage also collapsed – he later remarried.

Brown died on June 2, 1985 in Cornwall, after suffering an internal haemorrhage.

Although his colourful personality and personal demons overshadowed much of his life, he became one of the country’s top political figures, helped gain consensus to push for joining the European Economic Area, and helped to enshrine one of the founding principles of peace in the Middle East.

Not bad for a Southwark boy who left school at fifteen.