A poignant letter from one of the brothers reads: 'Dear father, how are you going on at home? I am quite well, out of the trenches for some time, having our rest' 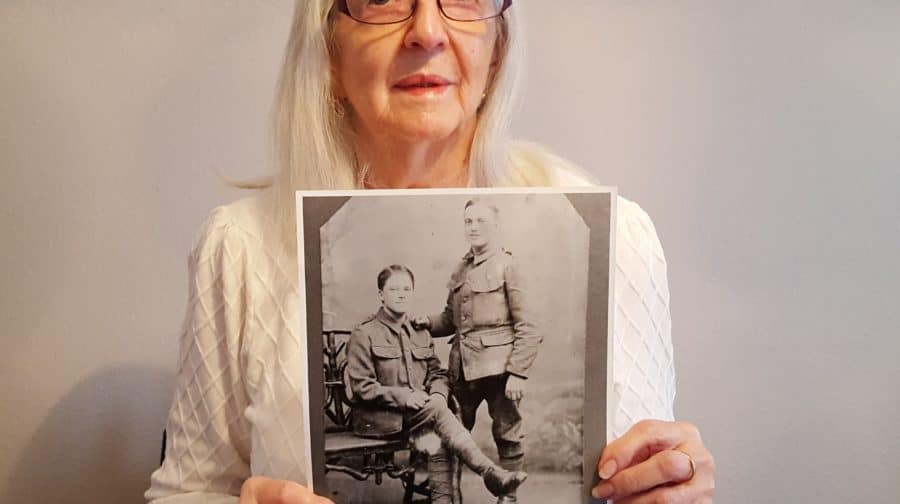 Eileen Ray with her uncles Frederick and Edwin

A few years ago, a Southwark woman called Eileen Ray told her friend Sylvia Anderson about her two uncles from Camberwell who had served and died in World War 1.

Eileen knew very little about them because her mother had only been five when they had gone off to serve in the war.

Frederick was born in 1894 and Edwin followed four years later, in 1898. Records show Frederick was educated in Camberwell, at a school established by Trinity College, Cambridge to help disadvantaged children.

He seems to have completed his education successfully, Sylvia and Eileen found, and had begun work as an apprentice compositor – someone who arranged keys in a printing press – by the age of sixteen. There is no information available about Edwin’s schooling.

Very little is known about the lives of the two young men during the war.

A poignant letter from Frederick to his parents reads: “Dear father, how are you going on at home? I am quite well, out of the trenches for some time, having our rest. Will you send me a parcel. Expect leave while here. Shall write letter later. Fred”. It is not known whether he was able to write another letter.

Edwin has no grave, like many soldiers who died in the First World War. Frederick is commemorated on the memorial in the Faubourg d’Amiens British Cemetery in Arras.

For their service the brothers were awarded the British War Medal and Victory Medal; additionally, Frederick was awarded the 1914-1915 Star Medal.

Sylvia added: “Although Eileen did not know [her uncles], she feels a strong connection to them and is extremely proud of them for the sacrifice they made for their country. On Sunday 14 November she will join the rest of the nation in remembering her uncles, as well as, all military personnel, past and present.”