The WWI hut that Camberwell built

Run by a Miss Marjorie Butter, the hut had a billiard room, reading rooms and 150 beds for those staying overnight 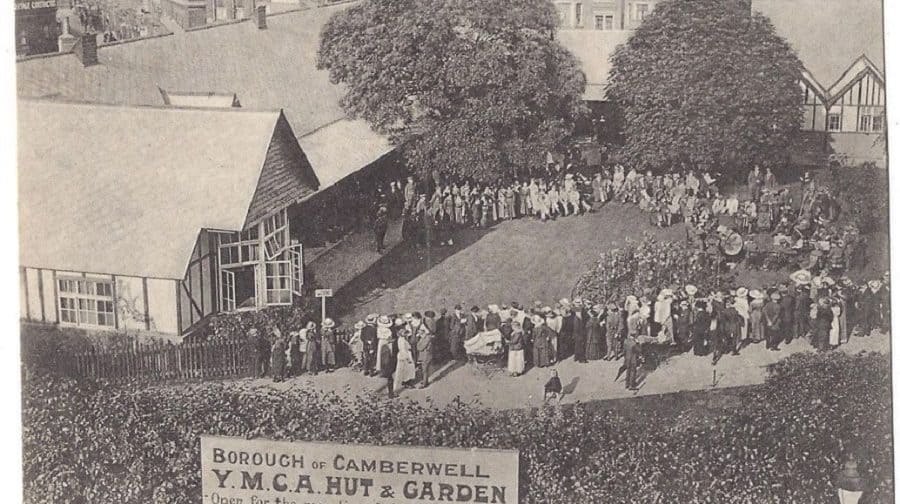 Like many places throughout the British Empire, the First World War had a tremendous impact on the Camberwell area, writes Neil Crossfield…

Many families would have their husbands, sons and fathers away fighting, but sometimes the war and its terrible consequences were brought far closer to home.

The Young Men’s Christian Association (YMCA) had been founded in 1844 and was part of the muscular Christianity movement so prevalent in the nineteenth century.

It had provided tented canteens for the Territorial Army since the turn of the century but when war was declared in August 1914, its support of the war effort grew exponentially with the creation of hundreds of YMCA “huts” both at home and abroad.

All across the many theatres of operations, in this World War, troops would find refuge when they saw the red triangle sign, indicating a YMCA centre.

The purpose of the huts was to provide a comfortable and homely space in which troops could relax and try to forget the horrors of the battlefield for a short time.

They could buy good wholesome food, cigarettes, tea or perhaps read a book or even play billiards, chess or draughts.

The YMCA also worked with organisations like the Workers Education Association and the forerunner of the Royal Army Education Corps to put on lectures for the men.

In line with their Christian ethos, the types of entertainment and distractions provided were no doubt an attempt to divert the men away from the temptations of alcohol and “loose women” when they were away from the front.  Troops were even encouraged to sign a temperance pledge.

How well this strategy worked when Camberwell Green was but a short tram ride away from the flesh pots of the West End is unknown, but records later show that the YMCA were paying for medical experts to visit the front line to warn the troops about the dangers of venereal diseases.

The YMCA also supplied stationery and encouraged the troops to write letters home. This was provided free of charge and was an extremely important part of their work. By 1918 some 930 million pieces of stationery had been sent out by YMCA HQ for distribution amongst those serving.

The huts were provided by private donations, or as in the case of the one on Camberwell Green, by public subscription.

The YMCA organised “Hut Weeks” to pay for the building and furnishing the huts. The image above shows a large sign advertising the appeal in Camberwell and eventually a total of £3,792 was raised.

Built by J.Mc Manus Ltd, it was opened on Empire Day, 24th May 1917, by various dignitaries including the Countess of Lansborough, the Countess of Wilton and the Mayor of Camberwell, Thomas Coombs.

Run by a Miss Marjorie Butter, the hut had a billiard room, reading rooms and 150 beds for those staying overnight.

Many injured troops from a nearby military hospital would visit the hut to attend concerts and use its facilities.

The hut was visited by the Queen of Roumania, (now Romania) Queen Victoria’s granddaughter.

After the war the hut was sold to the Camberwell Corporation for £1,250 and used as a labour exchange until January 1921 when it was destroyed in a suspicious fire.