Tide and seek – Mudlarking on the Thames 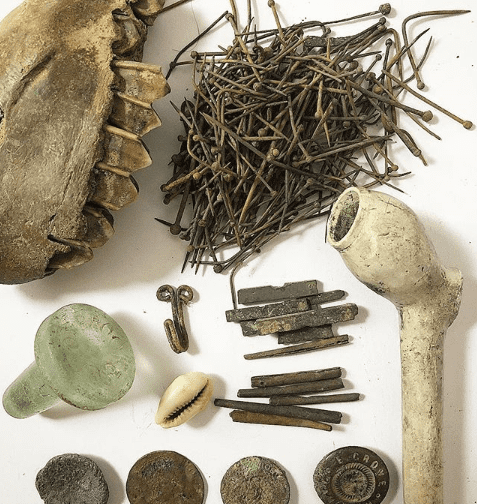 In her four year mudlarking career, Anna Borzello has found “lots of bullets,” been stuck up to her knees in mud and refused access by an Uber. Sometimes she even “smells of the river” and says clothes tarnished by Thames mud will never be clean again.

Last year Anna won the Instagram category of Totally Thames’ #ThamesLens competition with her picture of Rotherhithe at high tide.

“I love taking photos,” the former BBC foreign correspondent said. “Part of the pleasure isn’t just being on the river, it’s taking the picture of what I find and then sharing it on Instagram. The online community is really good.”

Raised in London, Anna spent ten years abroad working in Uganda and Nigeria. “Whenever I thought of London, what I missed was always the river, particularly the south bank,” she said. “I came back to London to have children and when my youngest got to seven, I thought ‘I’m going to do mudlarking seriously.’ So I started going two weeks out of four.”

A mudlarking licence was introduced three years ago. “You used to be able to look with your eyes but not dig. Now you can’t remove anything from the foreshore,” Anna said.

Anything older than 300 years must be taken to the Museum of London to be recorded. “One great find I had was an early 17th century seal, someone’s personal stamp, with a dove on it,” Anna said. “At the beginning I thought I discovered a fantastic find: a pair of doves on pottery but it’s actually a really common Willow china pattern from Victorian times and you find them absolutely everywhere.”

Things end up in the river for all sorts of reasons. “Landfill has been dumped from outside London. Inside London it was working docks, so you had people building boats, travelling on boats, ferries going back and forth. If it’s a ferry point, there’ll be so many pipes; they were one-use, so then people would throw them into the river,” Anna said. On the south bank, the Elizabethan theatres would dump Tudor money boxes into the Thames.

“Old dolls are really freaky,” Anna said. “I found a silver coin from the early 1600s bent in an S-shape, which was a love token.

“And I know someone who found a penny with the word c**t scratched into it. I like anything that connects me with the humanity of people in the past.

“If I see a bit of smashed pottery, that connects me with the Georgians because I’m really clumsy.”

Mudlarking is quite a solitary experience. “Most prefer to go on their own. At the height of low tide, you only have a 20 minute window. Occasionally I bring a garden trough but basically I’m too lazy to scrape. People do take metal detectors,” Anna said.

“Each thing you find has its own micro story. The river is a magical place.”

Southwark NewsHistoryTide and seek – Mudlarking on the Thames