Top marks for the ‘University of the East End’

After 128 years The Blackfriars Settlement, which started life as the Women’s University Settlement, has been nominated for a Southwark Blue Plaque 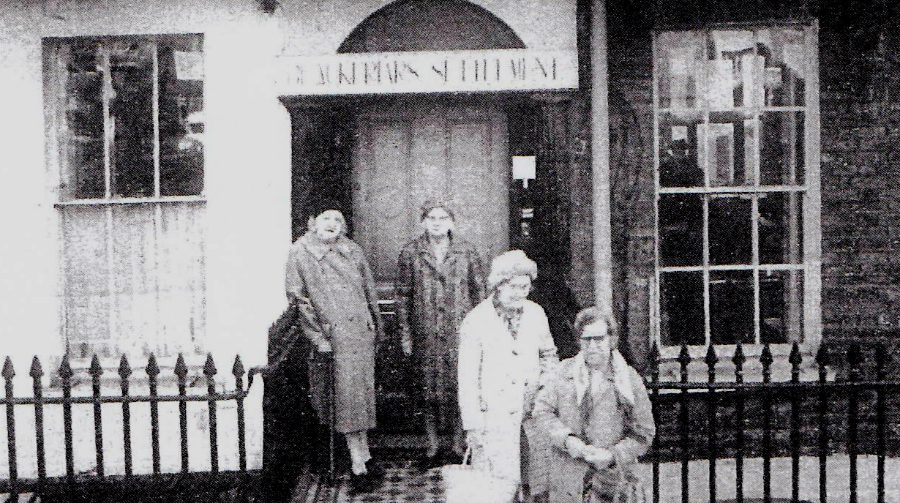 The founders outside the original Nelson Square headquarters

One hundred and twenty-eight years after being founded with the lofty ambitions of becoming “the University of the East End”, the Blackfriars Settlement is still providing vital services to some of the capital’s neediest people.

The charity was founded back in 1887, the year of Queen Victoria’s Golden Jubilee, by a group of female students from Cambridge, Oxford, Royal Holloway and Bedford universities.

The scholars included Henrietta Barnett, who vowed that the Nelson Square charity – then known as the Women’s University Settlement – would “promoted the welfare of the people of the poorer districts of London and especially of the women and children.” This would be done by “devising and promoting schemes which tend to elevate them physically, intellectually and morally.”

These were ambitious aims and the group quickly set to work. While progress wasn’t rapid, the charity slowly but surely grew in reach and impact. Small gestures and events – such as providing 500 south London children with a special Christmas treat, or putting on “lantern lectures” for women in the evenings – went a long way in establishing the group in the community. A mother’s club was formed, as was a “crippled boot-making shop.”

Despite being damaged by a WW2 bombing raid, the settlement continued to grow and began to move away from their ‘women and children first’ mentality. The group expanded into helping all residents, regardless of sex or age, and was renamed the Blackfriars Settlement.

Members of a youth club during the 1970s

A ‘sheltered worker’ in action

As the 20th century rolled on, the influence of the settlement grew. The sheltered workshops had gained a “distinguished tradition” for producing high-quality rugs, and the youth clubs were seen as one of the major reasons for a 60 percent decrease in juvenile crime during 1974. That same year, the charity’s director Jim Radford explained how the Blackfriars Settlement had expanded beyond improving people’s lives, to having people join together to improve their own communities.

He said: “The purpose of a settlement is to encourage and enable people to move towards a vision of a caring, sharing society, to bring about the maximum involvement of the group, neighbourhood or community in solving the problems that concern them.” They began to work with unions, TRAs and protestors, helping provide support and advice, and soon moved to a more spacious headquarters in Rushworth Street. While over a century has passed, the settlement aspires today to the same ambitions of its trailblazing founders: to help vulnerable people live their lives with as much confidence, control and joy as possible.

The Blackfriars Settlement has been nominated for a Southwark Blue Plaque this year. To give it your vote you can email news@www.newsatden.co.uk, write to Southwark Blue Plaques, C/O Southwark Heritage Association, 216 Upland Road, East Dulwich, SE22 0DH, fill in a voting card at any Southwark library or vote online at www.surveymonkey.com/r/ZFYHYZ6

Southwark NewsHistoryTop marks for the ‘University of the East End’