Walworth had a zoo fit for Queen Victoria – and 8,000 guests a day

Tigers, tortoises, llamas and lions; and the only zoo in England to house giraffes 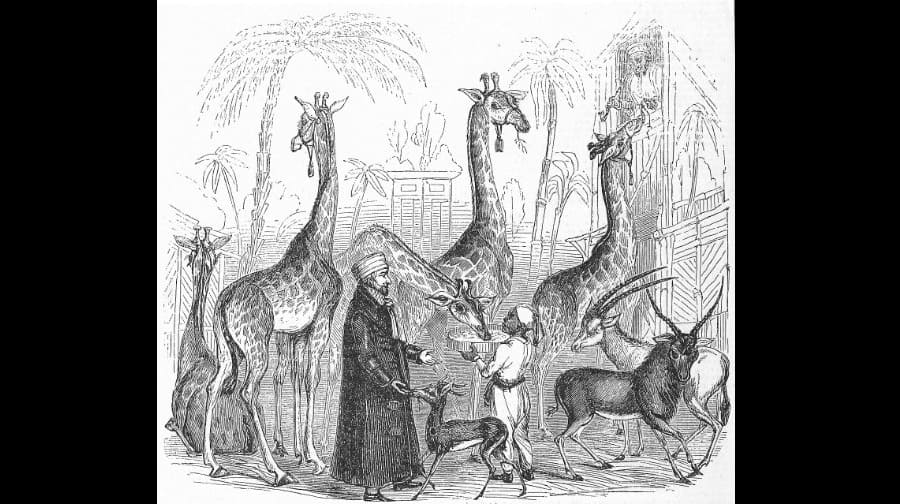 There’s a familiar narrative that goes along with all of the up-and-coming areas of London we so often hear about today: that places like Peckham, Walworth and Bermondsey were all terrifically poor, with little going for them.

Some of the oldest parts of the borough, like Walworth and Newington are even mentioned William the Conqueror’s Domesday Book of 1086. But you can go back a life time – some eighty years – to find the days of one cultural nadir: when Walworth and Elephant and Castle had theatres and picture houses to rival the West End.

By contrast, authors like James Abercrombie described the Newington Butts in 1789 as a place where grapes, peaches and nectarines would grow, and Walworth Gardens (now Sutherland Square) was a place to among tulip fields.

Yet more baffling today, is the thought that little Pasley Park down Penrose Street was once a place to see the British Empire’s most dazzling spoils it could bring home.

Royal Surrey Zoological Gardens first arrived at (formerly) Lorrimore Park in 1831, having been established by Edward Cross. Mr Cross was a famous proprietor of the time, and also owned another, smaller zoo, The Menagerie in The Strand.

It opened three years after London Zoo in Regent’s Park. Yet by all accounts at the time, it was the far superior destination for anyone wanting to spoil their child with an otherworldly sight.

It had not just lions, but tigers, reindeer, elephants and llamas. Tots could take a ride on the bulbous back of a giant Galapagos tortoises, and the zoo featured Britain’s first ever giraffe enclosure – a small family of five.

Typical of the time – when the phrase ‘animal welfare’ was as well-known as Wi-Fi – many of these incredible creatures were caged. But more terrific was the 100-metre wide glass dome –like building that covered: a precursor to the ever famous Crystal Palace.

Then came the famous patrons who gave the zoo its Royal title. Queen Victoria was said to have visited in 1848 with Prince Albert and their children. But they were but a handful of the 8,000 who marvelled through the gardens each day. Historian Mary Boast write in The Story of Walworth (1976) that Her Majesty was particularly taken by a friendship she observed between a tigresses and a humble hound.

John Whelan, Walworth Society member and history enthusiast called Pasley “a little park with a big history” where 170 animal species could be found.

“Now two stone statues of ostriches remind people of some of these exotic animals,” he said.

But sadly, the great Zoological Gardens only stayed in town for 25 years, and closed in 1856, not long after Mr Cross died.

Southwark NewsHistoryWalworth had a zoo fit for Queen Victoria – and 8,000 guests a day