Warwick Charlton: The local man who painstakingly recreated the Mayflower – and then donated it to the American people

The ship used as the centrepiece of the Mayflower anniversary celebrations will be one painstakingly recreated by local man, Warwick Charlton 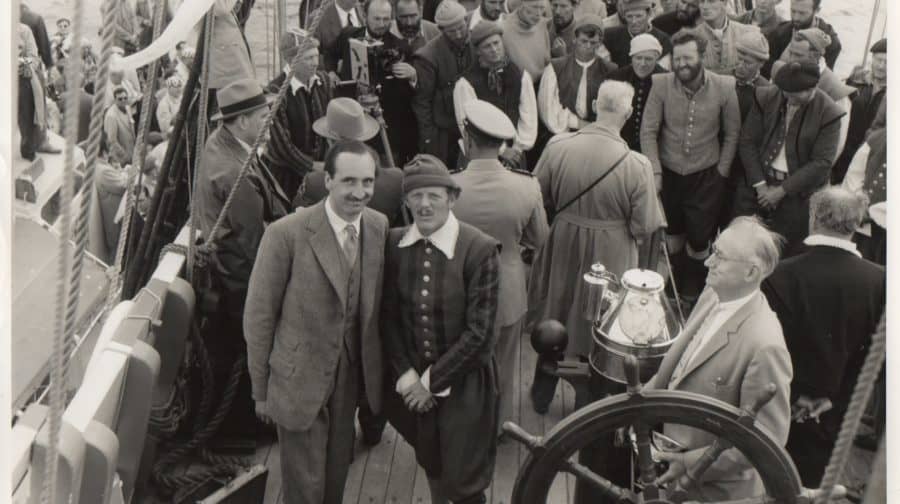 Next year, a small wooden ship will become the focus of attention on both sides of the Atlantic, as the four-hundred anniversary of the sailing of the Mayflower arrives.

The vessel, which set off from Rotherhithe in 1620, and whose captain is buried in the area’s St Mary’s Churchyard, transported the first English settlers, known as the Pilgrims, to the New World.

The physical ship that will be at the centre-piece of the anniversary celebrations will not be the original – but a replica, born out of a passion project from a Kennington man who from the experience of war became convinced that a ‘Mayflower II’ would help strengthen Anglo-American relations.

That man, Warwick Charton, was born the son of a Fleet Street journalist in Chelsea, later living on Kennington Park Road, in 1918.

Following in his father’s footsteps, he held a number of reporter roles before signing up for the war in 1939. Warwick Charlton, pictured, conceived of recreating the iconic ship while serving the Eighth Army during the war Image: Randal Charlton

On one early assignment at the Daily Sketch tabloid, Warwick was sent out by his editor to investigate a ghostly apparition. He returned to file his copy – including direct quotes from the ‘ghost.’

The anecdote, recounted in a new biography of Warwick, by his son Randal Charton, shows something of the man’s personality – which would ultimately lead him to recreating the historic ship from scratch and gifting it to the American people for the nominal fee of $1.

He first conceived of the idea in war-time, during which he served in the Eighth Army in North Africa.

Warwick was the founding editor of several army newspapers, including the well-respected Eighth Army News.

Publishing a string of papers in the middle of war was a test of resourcefulness – even as a well-connected press officer on General Montgomery’s staff.

“It was a master’s degree in manufacturing something from nothing; the perfect training in how to build a ship for which no plans existed,” writes Randal in his biography of his father.

The actual seed of the idea to rebuild the Mayflower seems to have come from a combination of love of history and a keen awareness of the need to keep the new American superpower on-side in the post-war world. Warwick recalled a time as a child when he was reminded by his history teacher that 1066 was a very important date in English history. “Now what is the next important date?” he asked the class.

“1067,” an insolent Warwick rushed to ask – for which he was given a heavy blow to the head as punishment.

But later, almost as a sorry, his history teacher gave him a massive tome entitled ‘The Decline and Fall of the West’.

Many years later in 1947 – long after Warwick had left prep school and studied at Epsom College, one of the country’s top private schools – he picked up a copy of the journals of William Bradford, the leader of the first tiny colony in what was then called ‘Plimouth’.

Little is mentioned in the journal of the ship which carried the Pilgrims there, instead focussing on the trials and tribulations of the colony and its motivating ideals.

But nevertheless, the idea stuck: Warwick decided that there should be a replica of the Mayflower.

He turned to the National Maritime Museum in Greenwich for help. No plans of the original Mayflower exist. In 1620, one did not need to register plans of the ship with the authorities.

A professor at the museum, RC Anderson, however, was an expert on the design of 17th century ships, and it was from his extensive knowledge that Warwick drew.

Yet it never occurred to the journalist that he would build the replica himself. Warwick instead thought it would make the ideal newspaper promotion in the hey-day of print media. Over the course of boozy lunches, he would get agreement from newspaper magnates to fund the endeavour. In the cold and sober light of the next morning, their accountants would disabuse them of the idea.

Despite his position as a freelance reporter on the Daily Express, Warwick could not get the newspaper’s proprietor, Lord Beaverbrook to agree to the idea, nor his friend, Hugh Cudlipp, then the editor of the Daily Mirror.

Instead, he turned to commercial backers and individuals, explaining that any money made would be given back to an educational trust, which had MPs, dukes and army generals on its board.

It was then, much like the original Mayflower itself, not plain sailing. Costs mounted, as Warwick insisted that the ship be as perfect a replica as possible, even down to the ink-pots on the captain’s desk.

An initial £280,000 budget was swiftly doubled, while Warwick would beg suppliers for freebies or favourable terms to keep the project on track.

To bring in extra money, he even turned the building of the ship into an exhibition with a notice reading: “Come and look round the hull of Mayflower II. Entrance fee: two shillings.”

By the time the ship set sail, nearly 250,000 had reportedly paid the amount. Despite the financial difficulties, by 1956 the costs had been covered and the ship almost entirely built. But yet another blow was dealt to the project, this one far out of Warwick’s hands.

In 1956, the Suez Crisis threatened to rupture Anglo-American relations permanently.

Donors urged Warwick to delay the sailing of the replica ship to America. But amid the charged geo-political atmosphere, there came opportunity too.

Cartoons in the Charlton family archives show that some picked up on the idea of Mayflower II mending seriously damaged relations on both side of the Atlantic.

Mayflower II set sail from Plymouth, England in 1957 to widespread media attention. The National Geographic magazine described the voyage as one of the great wonders of modern times, while Life carried news of the trip on its front page.

When the ship docked in the harbour at Plymouth, Mass on June 13, after 54 days at sea, it was greeted at the dock by Vice-President Richard Nixon and John F Kennedy, then just a junior senator.

Several months later, in the offices of a law firm in Boston, Warwick signed a contract formally giving the ship to the American nation for the nominal sum of just $1.

A labour of love and many years was then finally over: At age 38, he had given the American people something they did not have – a piece of their own history.

The ship is currently being restored at the Plimoth Plantation, a living history museum in Massachusetts, where it is due to be unveiled in time for the 2020 anniversary.

It has been visited by over 25 million Americans since it was given to the nation.

A new biography of Warwick Charlton, The Wicked Pilgrim by Randal Charlton, is published by Three Sisters Publishing.

More details and where to find the book can be found on the website: thewickedpilgrim.com.

Southwark NewsHistoryWarwick Charlton: The local man who painstakingly recreated the Mayflower – and then donated it to the American people