'At the going down of the sun, and in the morning, we will remember them' 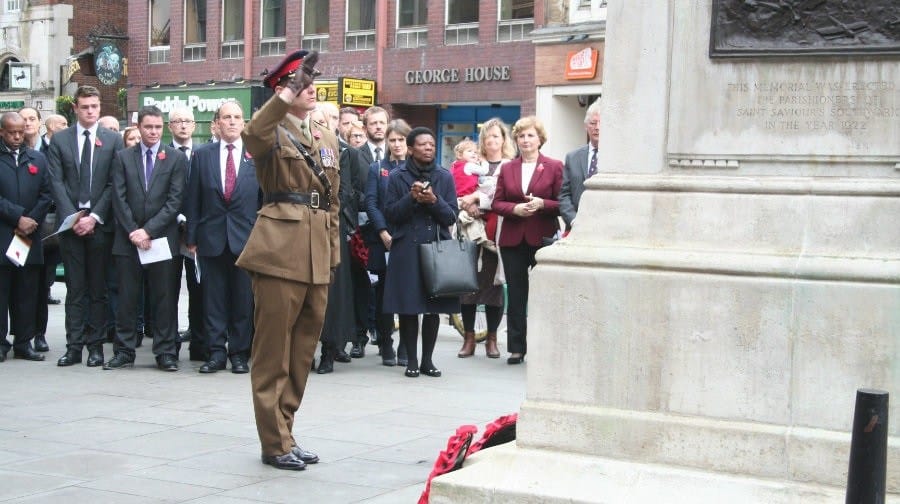 As we commemorate the centenary of the cessation of the First World War this Sunday November 11, we look at the places locally that you can come together and pay your respects, writes Susie Kellie…

Across the country and indeed the globe people will  come together at 11am this Sunday, exactly 100 years on from the Armistice,  of ‘the war to end all wars’.

In 1921, the year the Royal British Legion was formed, ‘Armistice Day’ was formally adopted as the national day of remembrance.

This is the official borough service that is public and attended by the Mayor of Southwark, past mayors, free citizens of the borough, Honorary Aldermen as well the three MPs and the Leader of the Council and all politicians from all parties. There are also representatives of the Royal British Legion, members of the armed forces, emergency services  and a representative of the Deputy Lieutenant. Although the parish of St Saviour,  was absorbed into the old Metropolitan Borough of Southwark in 1900, there was strong local pressure for a war memorial commemorating those who had lived or worked within this  historic parish by the Cathedral.

This war memorial was paid for by public subscription following a competition organised by the local war memorial committee which was assessed by Sir Cecil Harcourt Smith of the Victoria and Albert Museum; the winning design was by the sculptor Philip Lindsey Clark.

The figure, according to the sculptor, was intended to “express the same dogged determination and unconquerable spirit displayed by all branches of our forces on land, on the seas, and in the air”.

The £4,000 raised also provided for a tablet designed by Sir John Ninian Comper in the Lady Chapel at Southwark Cathedral which is inscribed with the 334 names of the fallen. Both memorials were unveiled on 16 November 1922 by General Lord Horne and dedicated by Dr W W Hough, Bishop of Woolwich.

The bronze sculpture and panels were cast by M Maneti, founders.

St Saviour’s War Memorial was restored by Southwark Council in 2014.

This service will be led by The Very Revd Andrew Dunn, Dean of Southwark, assisted by the clergy of the district.

This war memorial was erected after World War I to honour the men of Bermondsey and Rotherhithe who served and died in the conflict.

It was unveiled by the Bishop of Southwark in October 1921 and replaced a temporary memorial of 1920.

The architect is unknown and further inscriptions were subsequently added to the monument. These commemorate both civilians and members of the civil defences and fire brigade who lost their lives in World War II.

A part of the inscription recalls the heavy price paid by ordinary Londoners in the London Blitz, which began in September 1940 and particularly affected the people of Bermondsey and Rotherhithe. The service at West Lane will by The Revd Tony Lucas.

Led by Archbishop Peter, the church will gather outside the cathedral in front of the cross followed by a mass service to honour all service men and women – ex and current, who have been killed in war and conflict.

A short-wreath laying ceremony to Bermondsey’s fallen, conducted by clergy from nearby St. James’ Church and will feature cadets from the 72 Detachment ACF on parade. A selection of artwork will be on sale at the market from residents of the Avondale Estate. All proceeds will go towards the Royal British Leigon and the Chelsea Pensioners.

Screening of Good Soldier Scwejk, a political comedy which highlights the absurdity of war

A Remembrance service including the 2 minute silence outside at the church’s war memorial at 11.00am

Greenwich kicks of its centenary celebrations with a weekend of wreath laying tributes which will be held at the following locations:

Buglers from the Cadet Forces will play the Last Post, followed by a two minute silence and the lighting of the boroughs three beacons will be lit.

A play written by Greenwich resident and screenwriter, Louisa Le Marchand will explore the hardships of war as well as the love, laughter and companionship that the women of Woolwich Royal Arsenal found in their lives. The play will be performed in one of the few remaining buildings where women munitions workers actually worked.

There will be two minutes of silence followed by a performance by Sinead Barton, Principle Violinist at the Lambeth Youth Symphony Orchestra.

Sinead will be playing on a violin made with sycamore and pine trees which grew in the battlefields on the western front.

This special service is open to everyone regardless of religious beliefs and will pay tribute to ex-service men and women from ethnic backgrounds.

For more information or to support the Streatham Civic Remembrance Day please visit:

If you are having a wreath laying and observing the two-minutes silence on this historic day, but it has not been included above let us know by emailing kevin@southwarknews.co.uk