Will and Lil’s ‘everyday’ in Dulwich during the war

Behind a normal front door on an average street in 1930s Dulwich lived the Eaglen family. But the ‘ordinary’ lives of Will and Lil’ had their extraordinary moments, even before the war, like when the little girl next door caught on fire and ran into her garden screaming, The Eaglen’s youngest daughter, Yvonne, was only ... 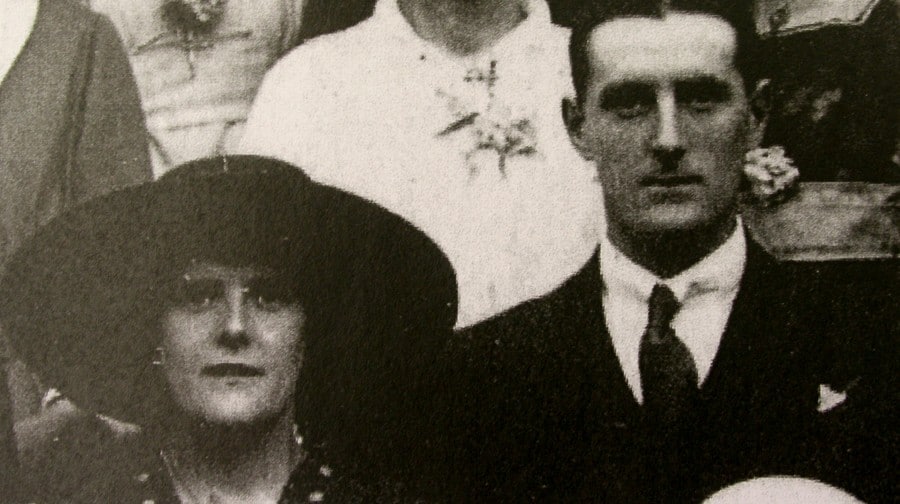 Behind a normal front door on an average street in 1930s Dulwich lived the Eaglen family.

But the ‘ordinary’ lives of Will and Lil’ had their extraordinary moments, even before the war, like when the little girl next door caught on fire and ran into her garden screaming,

The Eaglen’s youngest daughter, Yvonne, was only a toddler at the time but remembers the horrifying incident well in her family’s biography, ‘Reminiscences of Peckham and East Dulwich’.

“My mum was carrying me in her arms and against her shoulder,” she wrote. “Still carrying me she went out into the garden, and I saw the girl in flames and heard her screaming. We couldn’t have done anything to help the girl…. I heard she had been left in the house alone when a candle caught her nightdress.”

Yvonne’s neighbour on Jennings Road, Sarah Bayman, rescued the girl and was awarded a Certificate of Rescue and Life Saving by the Fire Service.

In 1939 Yvonne was six and her older brother Alan had just got his new uniform fitted for Alleyn’s after passing the eleven plus when war was declared and the whole school evacuated.

On Sunday September 3, 1939, the whole family sat around the radio in the living room at 11am waiting for a speech from the Prime Minister, Neville Chamberlain, as the smell of roast dinner filled the house.

When he announced that no reply had been received to England’s ‘note’ and we were therefore at war with Germany, Yvonne’s dad, Will, picked up his coat and left the house without a word.

She found out later he had gone straight down to the police station at Crystal Palace Road and signed up as a War Reserve Police Constable.

On one occasion he was given the task of guarding an unexploded bomb by Dulwich Library. It was a very hot day and, in a full police uniform, Will stood sweltering inside the cordon around the hole in the road. An old lady passed by and said:”Oh dear officer will you have to stand there all day?” to which he replied: “Not if it goes off Madam.”

In what he described to his family as one of his worst days, during the war Will also had to attend an accident at a fairground on Peckham Rye. A young boy had been mucking about on ‘The Caterpillar’ when his leg got caught in the mechanism and it unfortunately had to be amputated.

After coming home from an early shift one day, he told the kids to go to the top of the road where they might be able to see the last remaining tower of Crystal Palace being blown up. “It’s because they think it’s a landmark and might help German planes know where they are,” he told the kids. They went to the top of the road but they couldn’t see anything until they heard an “almighty bang and saw a cloud of black smoke.”

During the war the residents of Jennings Road would stand at their front doors and look at the red glow in the distance where the London Docks were burning after a bombing raid. Jennings Road survived the war relatively unscathed, though. Despite Anderson shelters being built at the bottom of the gardens, they were hardly ever used as the road was never bombed.

Yvonne remembered being in a public brick-built shelter one night when one of the new V2 rocket bombs dropped. “It was still daylight outside when, without any warning, I heard “whoosh” followed by a huge explosion coming from the direction where we used to see the red sky. I was terrified but I heard no more before the war ended,” she wrote.

The only resident of the road not to survive the war was Tommy Gardener, a Stoker serving in the Royal Navy on HMS Belmont, which was torpedoed in January 1942 with no survivors.

Two of the Jennings Road residents were taken prisoner during the war – Dorrie Strickland’s husband, who was in the RAF, was taken prisoner by the Germans and army man George Wheeler ended up as a Japanese POW. “I was there when, assisted by a man on each side of him, he appeared at the Crystal Palace Road end of Jennings, in a state of near-collapse, after the War ended,” wrote Yvonne.

Will and Lil’ were quite the characters by all accounts – Will, the French-speaking Waiter at one of London’s top hotels with a great sense of humour, and Lil’, the knitting saviour of all the women on Jennings Road and permanent thorn in the side of the Gas Company.

The family got all The Carlton Hotel’s old crockery and they never paid for ketchup either, according to Yvonne. “It was not unusual for us to open the kitchen cupboard and see six bottles of Tomato Ketchup!”

Yvonne remembers, not so fondly, being regularly washed at the kitchen table with red carbolic soap.

Will was always tinkering with the backyard gate, before Camberwell Council took it away as part of their wartime scrap drive. Yvonne said she would know where to find him in heaven; he’d be outside fixing the gate. To which he quipped:“I’m not going there, I won’t know anyone.”

Yvonne bought her dad a Bing Crosby record in 1974 – ‘tie a yellow ribbon round the old oak tree’. It was supposed to be a Christmas gift but one summer day she decided to give it to him early and they danced around the living room to it.

“I was so glad I took the record that day. I never saw him again. On 21st November 1974 my mother found him dead on the floor of his bedroom. The Doctor said his heart had just stopped in the night. I still can’t listen to [that record],” she wrote.

Author of ‘Reminiscences of Peckham and East Dulwich’, Yvonne Wakefield (seated) with one of her neighbours.

Yvonne’s biography is part of an exhibition of local archive materials currently on display at Peckham Platform. Subject Index has been put together by artist Anna Besant in conjunction with Southwark’s Local History Library. Anyone with any items to contribute to an ever-developing archive of Peckham’s history should take them to the gallery at Peckham Square and some of the items contributed could form part of the permanent archive at John Harvard Library.

Southwark NewsHistoryWill and Lil’s ‘everyday’ in Dulwich during the war