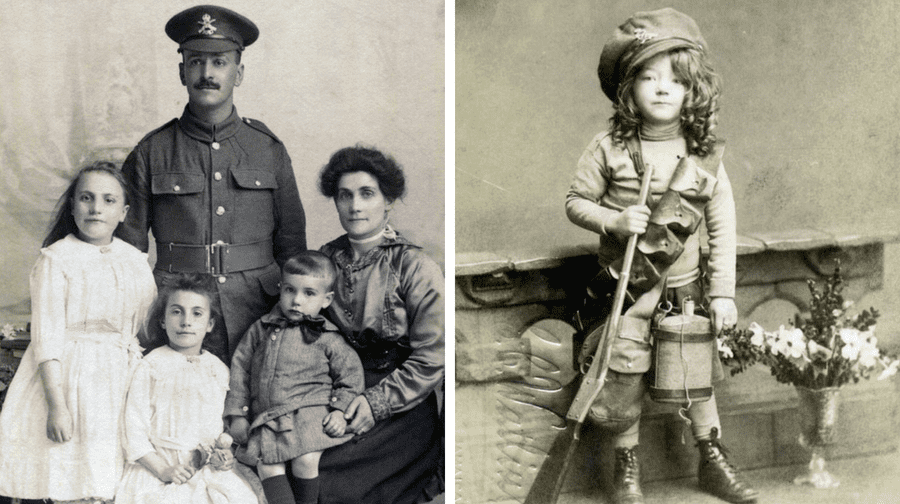 Images of a British soldier with his family in Bermondsey and a child dressed up in her father’s uniform during World War One have been unearthed as part of an archive project.

One of the photographs is of the Fey family, who appeared to live in Bermondsey during the war.

Albert Edward Fey is understood to have served in the 9th (Machine Gun) Battalion Royal Naval Division during WWI.

He is pictured with his wife Ellen Elliston, their son Albert Edward junior and their daughters Florence and Ethel.

Research by The Army Children Archive suggests that Albert Edward Fey married Ellen Sarah Elliston in 1907 when they were both 23.

They were photographed at Angle’s Studios, based at 110 Southwark Park Road and 40 Walworth Road. Another photograph, taken at EC Watling studio, based at 33 Jamaica Road, in Bermondsey, shows a young girl dressed up as a soldier.

The child appears to be wearing her father’s trench cap and kit, a leather bandolier, water bottle and what looks like a haversack.

She is holding a rifle in the picture, which is likely to be a toy, and the cap badge looks as though it could be from the Royal Artillery.

The Army Children Archive (TACA) was founded as a website (www.archhistory.co.uk) in 2007 by Clare Gibson, a writer, editor, historian – and herself a former army child.

The independent, not-for-profit archive preserves and shares information about British army children and their history.

TACA aims to provide an understanding of what children of volunteer, conscript and regular soldiers went through during WWI from 1914 to 1918.

As a virtual archive, it is instantly accessible to anyone, and it receives contributions and inquiries from former army children, historical researchers, family historians and those interested in the lives and times of army children.

It is updated weekly and can also be found on Facebook by searching The Army Children Archive (TACA) and Twitter @ArmyChildren.