The WWII heroes of Dulwich Hamlet 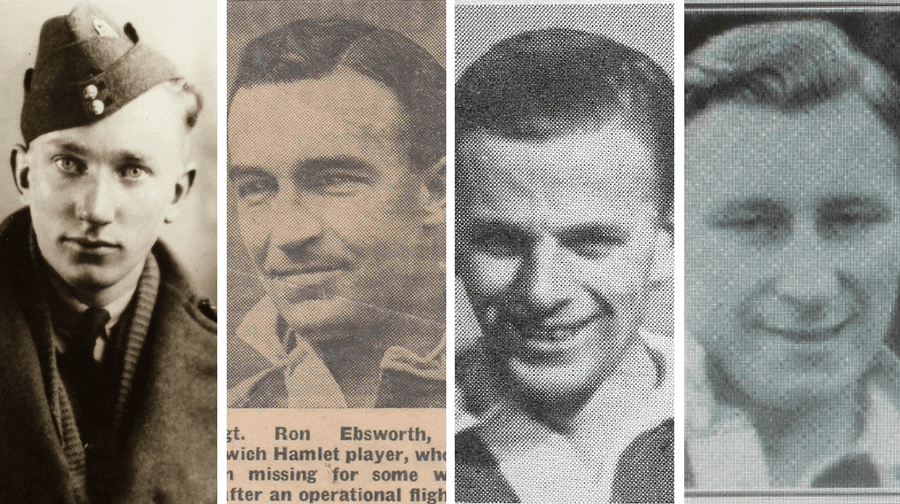 The details of how four Dulwich Hamlet players lost their lives during WWII have been unearthed by a season ticket holder.

Steve Hunnisett has told the stories of the four men in a new book which will be published tomorrow (Friday) as the club holds its annual remembrance service.

Eric Walter Pierce, Ronald William Ebsworth, Reginald Stephen Anderson, and William Wilfred Parr all appear on the club’s roll of honour which lists the names of players who lost their lives during WWI and WWII.

Hunnisett, a battlefield guide and military researcher, said there were “bits and bobs of information” – but he decided to research into the players’ lives as nobody knew a great deal about them.

“They had all volunteered to serve with the RAF as air crew so they were all fliers in some shape or form and were all Dulwich Hamlet players,” said the 58-year-old.

“The one we know the least about is Eric Pierce because he had only just left playing for the club’s junior side.

“The other three were all established first team players and Reg and Bill were actually England amateur internationals which was quite high profile at the time; they were genuine amateurs in those times and didn’t get paid.”

Eric Pierce, born in Camberwell, died aged 20 on October 12, 1941, while serving as a Leading Aircraftman (pilot).

Ronald Ebsworth died aged 35 on November 30, 1941. He was a Sergeant (wireless operator/gunner).

Reginald Anderson, who was born in Peckham and went to Wilson’s Grammar School, died aged 25 on February 24, 1942. He served as a Sergeant (observer).

“Eric died in a crash while he was still training as a pilot which was very sad,” said Hunnisett.

“When you volunteered as air crew you had to wait until you were called forward for your training so Eric had only served something like 263 days.

“Reg and Ron both died while on operational flights going out to Germany. I think they were both with bomber command so Ron was flying on a mission to Hamburg and Reg was on what they called a minelaying mission supporting the Navy.

“Bill was also a pilot and died in a flying accident.”

“I did some digging while we were researching the book and found Pierce’s family were from Merton and the Anderson family were actually from Dulwich, but Ron was from Essex and Parr came from Blackpool,” he added.

“Anderson came from Woodward Road in East Dulwich. He was the local boy out of all of them.”

By 1945, 80 members of Dulwich Hamlet had joined the various armed forces.

One or two were also conscripted to work in British coal mines as ‘Bevin Boys’.

For Freedom, Dulwich Hamlet: Second World War Roll of Honour, by Steve Hunnisett, will be published on November 10.

Copies can be bought for £3 from the Dulwich Hamlet club store, either in person or online.