A Dark and Tender Cake

The intense and at times violent bond between mother and daughter 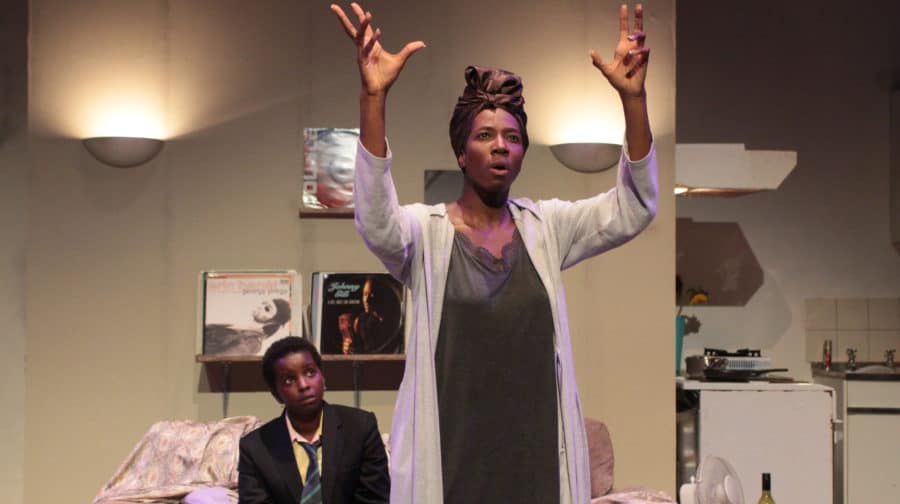 …cake begins on one of those hot summer evenings. The air hums with heat, its stifling tension rolls off the middle-aged woman on stage. She paces back and forth across her living room, she plays one record, she throws it away, she opens the fridge but chooses nothing, she swigs wine from an already opened bottle. She is, it seems, completely alive and utterly alone. And then there comes the knock, writes Madeleine Kelly.

Sixteen-year-old Eshe has come to visit her mother and she brings with her a lifetime of uncertainty and love.

…cake is a part of a trilogy by babirye bukilwa but the play could easily stand alone. Centred on the intense and at times violent bond between mother and daughter Sissy and Eshe, there is more than enough substance here to fill the hour and a half run time. bukilwa’s script is lyrical and dense, unpacking the pair’s dynamic in consistently fresh and interesting ways. 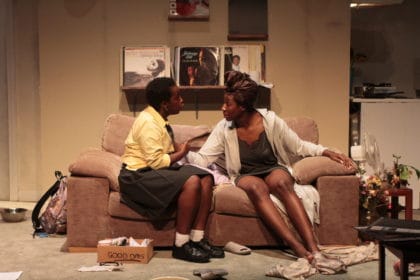 As the play progresses the author pulls the threads of the pair’s love taut. Eshe, it transpires, has fled the home on account of her mother’s substance misuse and mental instability. Sissy, as frightened of someone staying as she is of being left, towers above her. Danielle Kassarate’s performance of Sissy is at once mesmerising and terrifying. The audience is left like Eshe in its wake, too horrified to watch, too captivated to look away. Meanwhile, Donna Danya plays Eshe with heartbreaking vulnerability, a girl on the cusp of adulthood.

Though the show’s themes are consistently dark, there is plenty of tenderness here too. bukilwa handles their subjects deftly giving the audience cause to laugh more often than gasp. Such careful handling was no doubt made possible by the decision to hire an all Black creative team. This commitment to providing a safe space for those involved in the project translated to the stage, allowing both the actresses and the audience to hold the story with an unusual lightness.

The forces visited upon Sissy and Eshe’s relationship are far bigger than the pair. But the play does not just function as an exposé of these injustices but a love letter to those who make their way through them. There is as much joyful resistance here as there is pain. It is hard to say quite what the result is but this is not a piece interested in result so much as process. As the play thrums towards its climax, it is clear that bukilwa’s work will stay with its audience for a long time, a testament to its weight and its tenderness.