A Riotous Evening Without The Riots

Oh, how we booed any mention of the Poll Tax and sinking the Belgrano 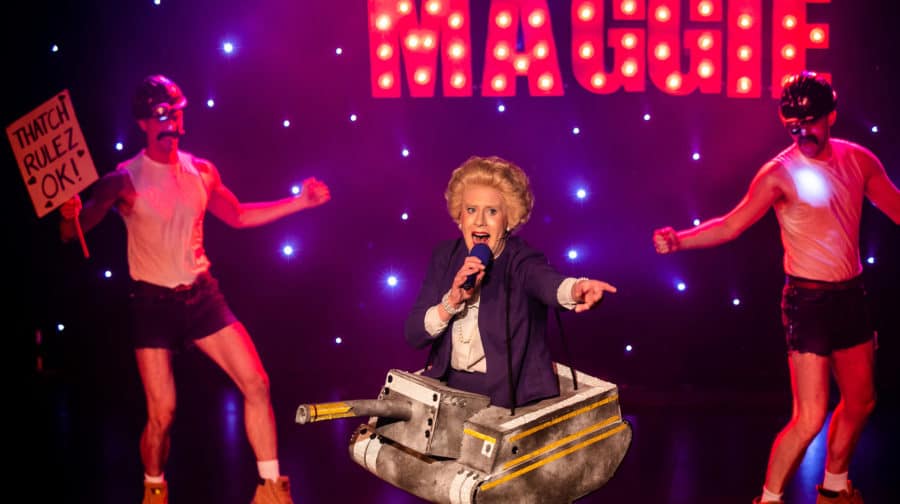 With a huge neon spelling out MAGGIE and a disco ball glittering above the stage you could tell this was not going to be a Ted Talk but Matt Tedford in the guise of Thatcher doing what he does best, writes Michael Holland.

Margaret Thatcher Queen of Soho has a history of more sell-out shows at the Edinburgh Fringe than sell-outs of the miners, and now it is enjoying a short West End run on its UK tour.

Eight years after premiering at Theatre 503 in Battersea the show has been adapted for larger theatres with ‘more glitter, louder music and bigger arm gestures’, and it works.

With the advantage of hindsight, Tedford and co-writer Jon Brittain have used the soundbites and speeches of Thatcher in her reign as PM to show the Conservatives up for the evil and corrupt party they were and still are today. And it is all nicely done with dollops of disco, and laughs that swing from politically clever to carry on camping it up.

The evening’s entertainment revolves around a book called Jenny lives with Eric and Martin, and the much despised Section 28 Bill, a notorious piece of homophobic legislation that evoked a pantomime atmosphere among a predominantly gay audience.  Oh, how we booed any mention of the Poll Tax and sinking the Belgrano.

Maggie is not alone on the stage; two strapping men, billed as her dancers, provide much more than dancing as they fill in for most of Thatcher’s Cabinet ministers and quite a few of her opposition, with Peter Tatchell turned into a Cockney hard nut character, and Jill Knight who, along with David Wilshire, introduced Section 28, is portrayed as a wicked, lying hag who made unsubstantiated claims to get the bill through.

It is very clever how something so hateful and such a backward step, was turned into a cabaret of fun. It helps that after many years we have move forward somewhat and the bill was eventually repealed when a Labour Government got legislation through, although it still casts its dark shadow.

Margaret Thatcher Queen of Soho tells an important story via the media of music and humour but that part of our history should never be forgotten to ensure that it never happens again.

And as much as Maggie pleads for your vote here, the ultimate message in this riotous night of fun is to never vote Tory.