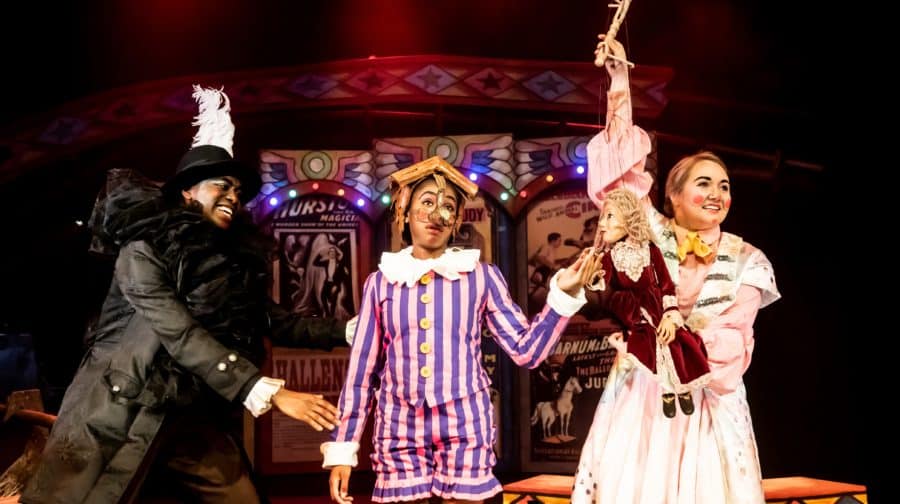 The magic of theatre lies in the moment an audience dreams the same dream in unison. For a family back in the warm embrace of Greenwich Theatre on its return to live theatre with two separate productions, Pinocchio and the Wolves of Willoughby Chase, this felt a miraculous moment indeed, write Ed, Frida and Woody Gray.

As we take our seats before a stage consisting of a rundown fairground and a broken rollercoaster ride we are reminded of the dereliction the last 18 months has brought to London’s Theatreland. The lights go down, the audience hushes and we gratefully fall into our reverie once again. ‘If we all dream the same dream at the same time then it must be real!’ cry the cast of Pinocchio and really real it really is.

This season Artistic Director James Haddrell very fittingly presents two plays that explore the flipside of the realms of the imagination – the little lies, fantasies and half-truths that we live by to protect ourselves and the ones we love, and the polarising dangerous lies that are told to gain advantage over others to secure nefarious dark ends. Theatre, where suspension of belief is implicit, is the best place to explore these big themes in a world of increasing fantasy, fakery, and twisted truths. For that reason we must make every effort to stop our theatres ever going dark again.

The production of Pinocchio’s much loved journey of self-discovery is not the much visited Walt Disney version, instead we are presented with Anthony Clark’s adaptation of Carlo Collodi’s original 1883 novel. Collodi created Pinocchio at a time when desperate Italian rural workers were migrating to urban centres, innocent of city life and therefore ripe for exploitation. In this production, the wooden boy himself is deftly brought from log to life by Cassandra Hercules with a perfect blend of innocence, wonder and mischief that greatly appealed to our two young reviewers aged 6 and 8.

Pinocchio’s adventures as he discovers the complexities of the world around him are skilfully revealed through a mix of comical puppetry and song under David Haller’s lively musical direction. Love conquers hate as Pinocchio frees himself from the clutches of streetwise Fellina and Volpino (Reice Weathers and Adam Karim), all the while mentored through this metamorphosis by father Gepetto (Anthony Spargo) and Grillo the cricket (Serin Ibrahim) and finally emerging triumphant and reborn from the belly of a whale as a real living boy who wants only to work hard and look after his father. Our young theatregoers Frida and Woody loved this production: ‘Very, very, very funny’ came the reply when asked what they made of it all. I checked both noses and they remained the same length despite the huge grins breaking out underneath. Would they do the same for their father I enquired? ‘Very funny’, came the reply. 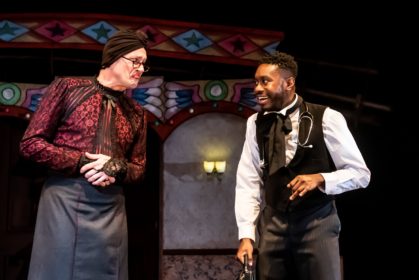 A similar quest for truth lies at the heart of Haddrell’s production of The Wolves of Willoughby Chase, written by the respected children’s author Joan Aiken in 1962 and adapted here by Russ Turney. Once again we are in the 19th century, this time in England under the reign of fictitious King James III where we are told by a mysterious stranger on a train, a new channel tunnel has let in wolves from Russia or Eastern Europe, ’or somewhere’, hungry wolves that watch from the woods. We are transported into a land of mist and snow and ice. But all is not what it seems in this version of England, where plucky Bonnie (Alice De-Warenne) and her cousin Sylvia (Cassandra Hercules) have to learn to overcome their innocence to triumph over the real dark forces that surround them.

Much farcical hugger-muggery ensues in this brilliant show with the creative cast stretched to great comic effect by Aiken’s entourage of characters. A standout performance by Anthony Spargo in delightful evil governess mode as the tenacious Miss Slighcarp was a great hit with the audience. Our two young reviewers left the theatre that evening evermore watchful for the wolves that hide among us, and evermore certain of how they will boldly take them to task if they ever dare to emerge from the shadows.