On 16 September at 8pm Tate Modern will host the world-class vocal ensemble ORA Singers for a unique performance of the 16th century choral work Spem in alium (Hope in another) by Thomas Tallis. It will be followed by the world premiere of a specially commissioned contemporary response by renowned choral composer Sir James MacMillan. ... 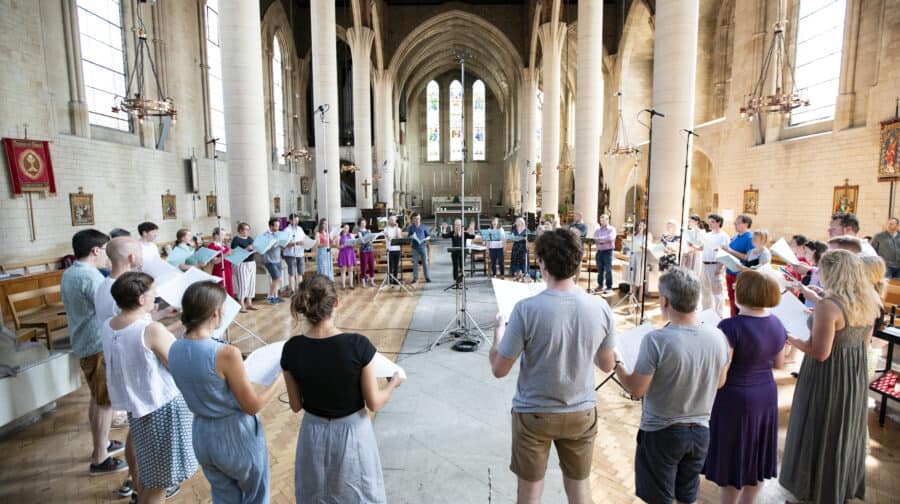 On 16 September at 8pm Tate Modern will host the world-class vocal ensemble ORA Singers for a unique performance of the 16th century choral work Spem in alium (Hope in another) by Thomas Tallis. It will be followed by the world premiere of a specially commissioned contemporary response by renowned choral composer Sir James MacMillan. Taking place 450 years after Spem in alium was first performed, the event will be livestreamed online for free on Tate’s YouTube and Facebook channels, bringing Tallis’ message of hope to audiences around the world. Believed to have been composed in 1570, Thomas Tallis’ Spem in alium is one of music’s most iconic works for the human voice, written by one of Britain’s greatest ever composers. This monumental piece of music featuring 40 individual singers is as powerful now as it was five centuries ago. It continues to move audiences and inspire artists, including Canadian artist Janet Cardiff whose Forty Part Motet, an atmospheric audio installation of 40 speakers, was shown at Tate Modern in 2017.

Before the outbreak of COVID-19, Tate Modern and ORA Singers had originally intended to celebrate the 450th anniversary of Tallis’ work with a day of public events and performances in the spring of 2020. This new online-only and socially-distanced performance, livestreamed from Tate Modern’s Turbine Hall, will be the first time that ORA Singers has performed as a group since lockdown.

In addition to Spem in alium, the group will perform the world premiere of Vidi aquam, a specially commissioned choral work by Sir James MacMillan. Also composed in 40 parts, it pays tribute to Tallis’s original while bringing the message of spem (hope) into the modern day. The concert will also include another pairing of Renaissance and contemporary music: Ave verum corpus by William Byrd (who was Tallis’ student and later colleague) and the British Composer Award-winning Ave verum corpus re-imagined by Roderick Williams, which was first commissioned by ORA Singers and had its premiere at the Tower of London in 2016.

“ORA Singers has not performed since COVID-19 struck and the future for live music still looks bleak, but we are full of hope. We see hope in a great work of art that has inspired people in good times and bad for nearly five centuries, hope in a new work that reflects on the past but looks to the future and the hope that we all feel when experiencing great art.”

“We once planned to stage this event with an audience back in the spring, coinciding with Tate Modern’s 20th anniversary as well as the 450th anniversary of Tallis’s music. When the pandemic hit we knew that would be impossible, but it felt all the more important to bring Spem in alium’s message of hope to the world. I’m delighted that we’re now able to stage it online and bring it to an even wider audience.”
Performed by ORA Singers in the Turbine Hall, Tate Modern
16 September 2020 at 20.00 – 21.00
Free to watch live at www.youtube.com/tate and www.facebook.com/tategallery
Performance supported by Naomi Milgrom AC