Jean Kelly Dances and Plays Through the Silence

Harpist Jean Kelly is originally from Cork, Ireland but now lives in New Cross and has done for over a decade. SE London has obviously grown on her as she claims, ‘I wouldn’t live anywhere else in London. There is a wonderful sense of community here which has kept us all going over the past few ... 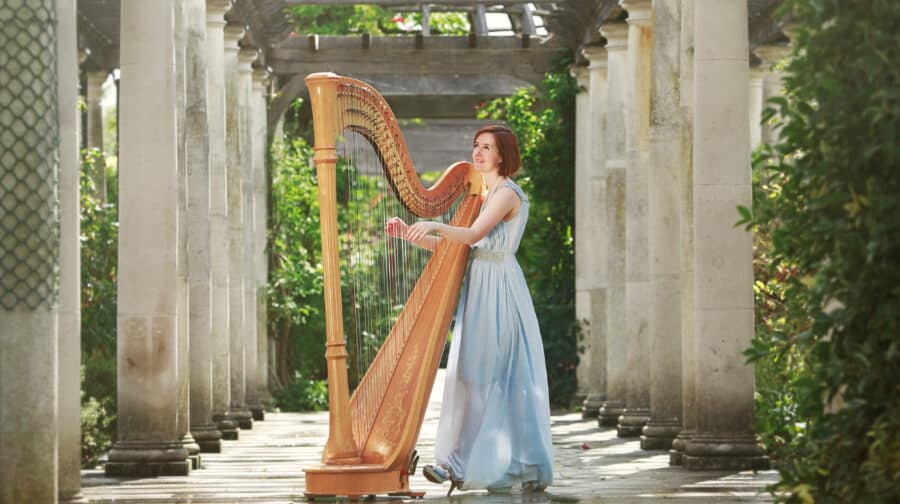 Harpist Jean Kelly is originally from Cork, Ireland but now lives in New Cross and has done for over a decade. SE London has obviously grown on her as she claims, ‘I wouldn’t live anywhere else in London. There is a wonderful sense of community here which has kept us all going over the past few months,’ writes Michael Holland.

Jean’s entry into music began in childhood and was a natural choice as both parents are musicians, with musicians in the family for several generations: ‘I played various instruments in childhood, including the cello and the piano, and started playing the harp at 14 with my wonderful first teacher, Bonnie Shaljean. I was hooked on the harp right from my first lesson – I started on Irish harp which is a smaller 34 stringed harp and then also began to play the pedal harp, which is the large, 47 string orchestral harp. I was so lucky to grow up in a city of music festivals with a wonderful School of Music. I was immersed in music,  we went to concerts all the time and heard music of different genres. I then won a scholarship to the Royal College of Music, London, and have lived here ever since.’

Jean calls her career ‘eclectic’. So far she has played ‘with orchestras, in folk and early music groups and in castles and palaces. I am currently playing with a group called ‘The Society of Strange and Ancient Instruments’ and for our current project four of us are learning to play the Trumpet Marine, which is an exotic stringed instrument popular in the 17th and 18th Centuries but has rarely been seen or heard since then.’

The harp is often seen as a solo instrument but Ms Kelly has other ideas: ‘I am much more interested in playing as part of an ensemble; finding and making new sounds, improvising and being inspired. Musicians are great fun and really the best company to hang around with.’ It is this playing and touring with others that compounds Jean’s love for music. ‘I have seen so much of the world,’ she says. ‘I feel truly grateful to have visited so many countries and experienced different ways of life… I performed in Norway last November and I enjoyed walking around Oslo in the snow and playing in beautiful concert halls there… This time last year I was in rehearsals to play at the Proms at the Royal Albert Hall, my family came along to hear me play and it was a brilliant evening.’ Jean Kelly was reliving the magical moments that all suddenly ended with the virus.

‘COVID-19 has had a catastrophic effect on live music. Venues are closed, concerts cancelled. All my colleagues are out of work, many in serious financial difficulty and ineligible for any type of financial support from the Government.’ This pioneering musician was obviously incensed. ‘I performed a concert in central London on 14th March and spent the following week receiving calls and emails to cancel all of my performing work for the rest of the year. It is heartbreaking how music has been silenced. I have always loved attending concerts listening to other musicians play and I really miss this. I also miss performing with other musicians and being inspired by them.’ With all the cancelled work and ‘the silence’, Jean struggled to feel any joy or inspiration from playing her harp in lockdown, and that had to change. ‘Very early on,’ begins the musician who played on the Lord of the Rings soundtrack, ‘I realised that I needed to have a routine to get myself through lockdown. I get up early and try to fit in a short yoga practice and a long walk every day. It really helps me to stay positive.  I have a three year old daughter and when nursery schools closed we were faced with spending all day in our flat. Rose’s Diddi-Dance class moved online, so that keeps us entertained on Mondays – we have learned flamenco, country dancing and Irish dancing steps and had a lot of laughs. We attend the virtual ‘Cutty Sark’ museum on Wednesdays, joining in with a story and singing  ‘Toddler Time’. We have regular ‘Zoom’ meets with grandparents in Ireland and Mexico and stay in regular contact with family. I am trying to take this time to savour small things such as a good cup of coffee mid-morning and the joy of watching the seeds we planted out on our balcony blossom into flowers. I am taking each day at a time and trying to move as much as possible every day.’

And how does she see the future? ‘It’s very difficult at this stage to imagine ever getting back to a full-time performing career but I think for me I am making an effort right now to stay in good health physically and mentally and also to incorporate as much play into the day as I can. I try to throw myself fully into whatever activity I am doing. Musicians are used to being resourceful and imaginative but it’s going to be tough to get going again. Like many others, I have had to upskill quickly  – learning how to record and edit audio and video content. I was delighted to be involved in some ongoing online recording projects which have kept me busy in the evenings. I also teach harp and piano and I moved my teaching online which has worked surprisingly well – I have been really impressed with the focus and progress of my students. I am not thinking too far ahead into the future at the moment.’

Southwark NewsLifestyleJean Kelly Dances and Plays Through the Silence