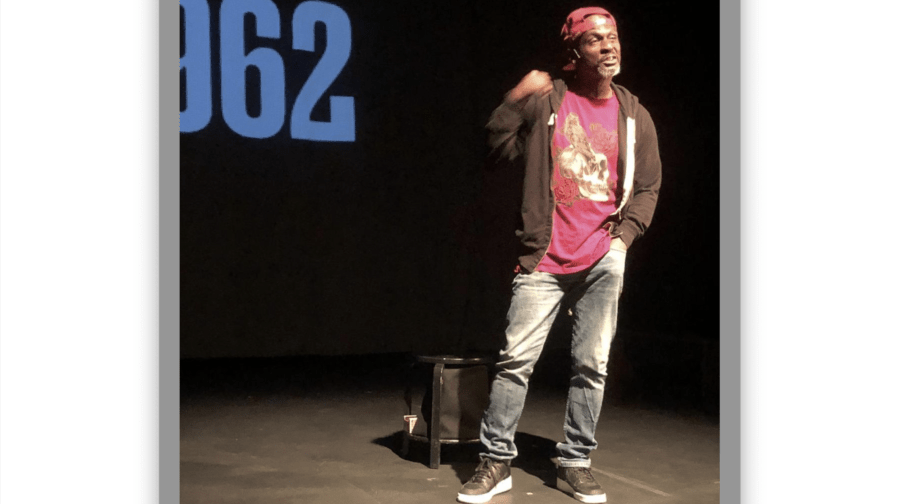 Frank Skully’s mother believed her son was cursed by God after he was taken away in a police van before he had even been baptised, and blames herself for the future criminal he became, but Frank knows it was the cult of Mammon that was the guiding light throughout his life and blames only himself, writes Michael Holland.

After a lifetime spent in and out of jail, Frank Skully turned elsewhere for help and Synergy Theatre Company became his saviour. His self-penned Every Sinner Has A Future is , he says, ’a one-man monologue asking the question, “Can you be born into crime?”… Is it nurture or nature? It charts my life from a baby to adult and the coincidences and traumas I faced that led me into crime and how coincidences and drama led me out of crime.’

Performed on a stark stage with just a few props and a video backdrop keeping us up with the passing years, Skully leads us through the events that he feels formed the man he became: being continually chased and beaten by the police; petty thieving, dealing with bullies and dodgy-dealing in the black market, and the inevitable spiralling down into ever more serious crime. All of which were enveloped in the cloak of racism that 1970s’ Britain wore. 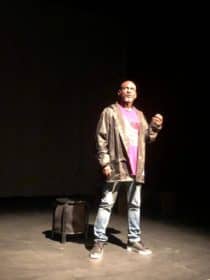 The middle section is pure poetry, delivered in a form of Shakespearean rap which, as soon as you realise there is rhyming going on, disappears like Banquo’s ghost after it has reminded him of his sins.

Every Sinner Has A Future is a sad tale that is told by the sinner, with the occasional joke to lighten the sombre mood, but it is a tale told well by the man who lived that life of police vans and prison cells. A person who had wanted so much more for himself as a young man and was willing to follow his father’s advice and ‘try twice as hard’ to achieve his goals but who was denied the opportunities that the white privileged were handed on a plate without having to try.

There are times during the performance when Frank is talking about his strict Roman Catholic mother and he struggles to keep his emotions in check. The audience, knowing these are not acted emotions but the tears of a man hurting, feel his pain.

Every Sinner Has A Future is a fairground where safety has been forsaken: the rollercoaster where the wheel might come off at any moment; the journey through the justice system on a Ghost Train in a tunnel with no light at the end; the bottomless helter-skelter of Hell.

Frank’s mum will believe it is a miracle that brought her boy to the stage, telling his – and her – story, and that the curse has been lifted. Frank knows it is because he tried twice as hard.

Frank Skully’s play is a stark reminder of the perpetual racism that people of colour combat every day of their lives from every corner of society; racism, which is now led from the Eton mess at the top so that those at the bottom have to negotiate the hand they are dealt with the best way they can.