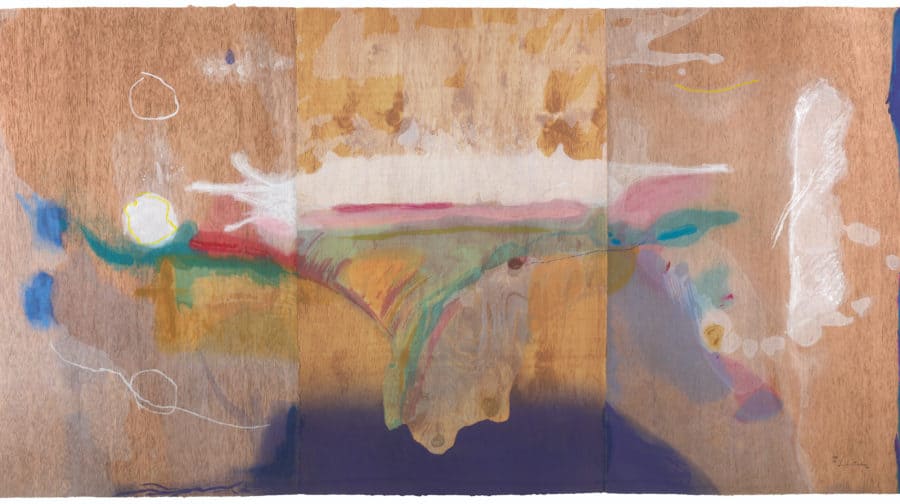 As you walk into the final room of the Helen Frankenthaler exhibition at The Dulwich Picture Gallery, you are met by three versions of Madame Butterfly, Helen Frankenthaler’s 2000 masterpiece. The piece appears, as Frankenthaler intended for her art, ‘born at once’ – a lyrical and intuitive explosion of colour, writes Madeleine Kelly.

But if it is an explosion, this exhibition suggests it is a controlled one. Marking the 10th anniversary of her death, the exhibition tracks Frankenthaler’s woodcutting process, introducing us to an artist whose work was as careful as it was intuitive, who described Art as ‘feeling, not factual’.

Frankenthaler was one of the most eminent of the second generation of American Abstract Expressionists. Inspired by Jackson Pollock to paint with her canvasses on the floor, she created a myriad of new techniques both working with canvas and, later on, working with woodcuts. But her work, though it inspired many better-known male imitators, was often sidelined in her lifetime.

This exhibition is part of a renewed interest in Frankenthaler’s work, taking as its subject the woodcuts Frankenthaler made in the latter part of her career. Its title, Radical Beauty, seeks to challenge the rather patronising criticism of her work as merely beautiful by centring the artist’s refined technique and process. In choosing to focus on the more technical woodcuts rather than the paintings, the exhibition takes great pains to dismiss the idea that Frankenthaler’s work was ‘easy’. In one room a few of the 65 proofs for Essence Mulberry (1977) can be seen with the artist’s succinct and often humorous notations, ‘NO schmalz pliz!’

The woodcuts themselves are mesmerising. Inspired by traditional Japanese woodcutting – Frankenthaler collaborated with Japanese printers and master carvers – and Expressionism, the lines in each work are their own language giving you a sense of being totally enmeshed within each work. Colour frequently gives sense to line and form, bestowing fresh meaning with each glance. The work is repeatedly novel as it resists consistent interpretation.

The exhibition is worth seeing for the work alone rather than the point it is making. Whilst credit for this work is long overdue, it is hard to stand in front of such dizzying work and care for a system of meaning as hierarchical as the canon. It is a world of its own: radical, yes, beautiful, yes, but above all feeling, not factual.

The Two Worlds of Tokyo Rose

I Want A Nutcracker For Christmas