At fourteen he saved a boy from drowning in the Thames, then he signed up for RAF in WW2, was a boxer in the Middle East, marathon trainer and a 85 year old security guard 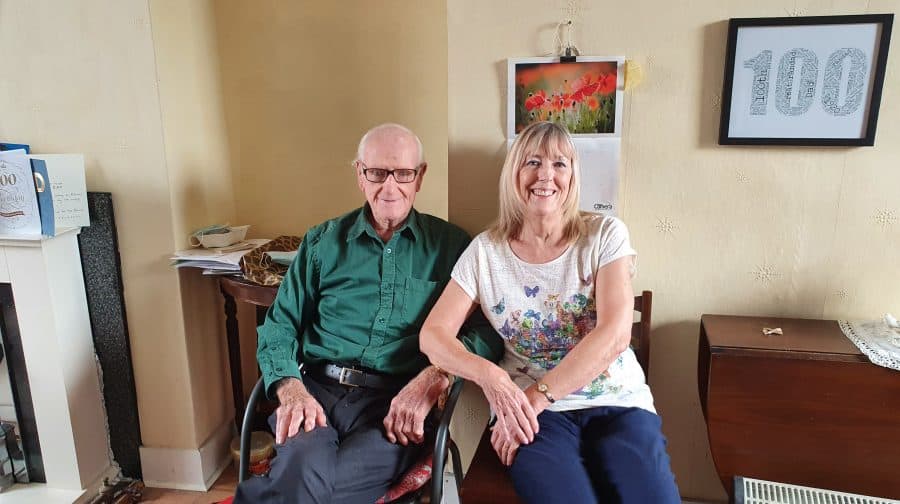 Mr Cooper has lived in Bermondsey all his life, other than war years spent in Croydon and the Middle East with the RAF. He grew up on Abbey Street.

The summer after leaving school aged 14 he was walking by the Thames near Tower Bridge with some friends. Some other children ran up and told them that two boys were struggling in the river.

A teenaged Mr Cooper rushed over and pulled both out. One seemed to be fine but the other was unresponsive. Mr Cooper used the now-obsolete Schafer technique to save his life, turning the boy face down and pressing on his back.

Mr Cooper had only learned the technique a few months before at school. “It was fate,” he said. “I thought he was done for but when I saw everything come up I knew that it had worked.”

The story was covered on the front page of the Mirror and Mr Cooper was given a hero’s reception at Bermondsey Town Hall under a red flag rather than the Union flag, Mr Cooper said – because the mayor at the time was a socialist.

“I didn’t have a clue what any of that meant,” Mr Cooper added. “I just thought I was Jack the Lad!” Jack Cooper in his RAF boxing team. He is on the far right of the back row.

He later became an apprentice toolmaker at a cigarette factory in the area. “There were factories on the end of every street in Bermondsey those days,” Mr Cooper said.

When the war started, he and his friends were keen to sign up but wanted to avoid the “horrible business” of fighting in the trenches, Mr Cooper went on.

He signed up for the RAF and was posted to Croydon, where he was a mechanic on Spitfires and Hurricanes.

After a while he was transferred to Egypt, and also spent time in Mandatory Palestine, now Israel, and Damascus in Syria.

“We saw lots of action… As soon as you saw those Stukas [a kind of German bomber plane], you ran,” he said.

Always a sports fan, Mr Cooper was the trainer of an RAF boxing team that beat a local outfit in Tel Aviv on Christmas Day. He also played a lot of water polo.

Back in Bermondsey after the war, he married his fiancee, who had waited four years for him, in St James’ Church off Jamaica Road. But tragically she died just two years later from tuberculosis. Mr Cooper later remarried.

He carried on as a toolmaker, first for an early plastic factory before moving onto Peek Freans, where he was a supervisor until 1982, when he took voluntary redundancy.

He combined his job at the biscuit factory with work as a fitness instructor, and trained around 40 of his colleagues to run marathons. “We used to go all over, we ran three marathons on Snowdon and two by Windermere.”

His time at the factory came to an end when he was asked to make 50 engineers redundant in 1982. “I told them, ‘you can make that 49 because I’m leaving first’,” he said.

Mr Cooper then became a security guard at Sotheby’s, the fine art auction house, where he crossed paths with several celebrities – often without knowing who they were.

He said: “A man came in one day and people were sort of pointing him out to me and saying ‘that’s Freddie Mercury!’ I said ‘who’s Freddie Mercury?’ We had all sorts in there – we had the Queen… we had Elle Macpherson.”

Mr Cooper eventually retired in 2005. “An 85-year-old security guard! Can you imagine?,” he said.

A keen Millwall fan, he only stopped going to the Den a few years ago. He is also an “avid reader” and enjoys puzzles and crosswords in his spare time.

He’s spent most of coronavirus lockdown indoors in his house on Southwark Park Road, the street where he’s lived since just after the war.

“I was going to do laps of my garden, but Captain Sir Tom Moore got there first!” he joked.

Mr Cooper added: “Lockdown hasn’t been too bad, but I’ve missed the pub [the Ancient Foresters on Southwark Park Road]. I’m going back there tonight for the first time.”

The pub is more important than just a place to relax, he said. Asked for the secret of his longevity, he joked: “Guinness, jellied eels and vinegar!”

Asked if he had ever wanted to move out of Bermondsey, he said: “I thought about it when I was younger. But why would I now? I can walk down the street, buy a paper. People know who I am.”