Bermondsey man Bert celebrated with his daughter, grand-children and great-grandchildren. 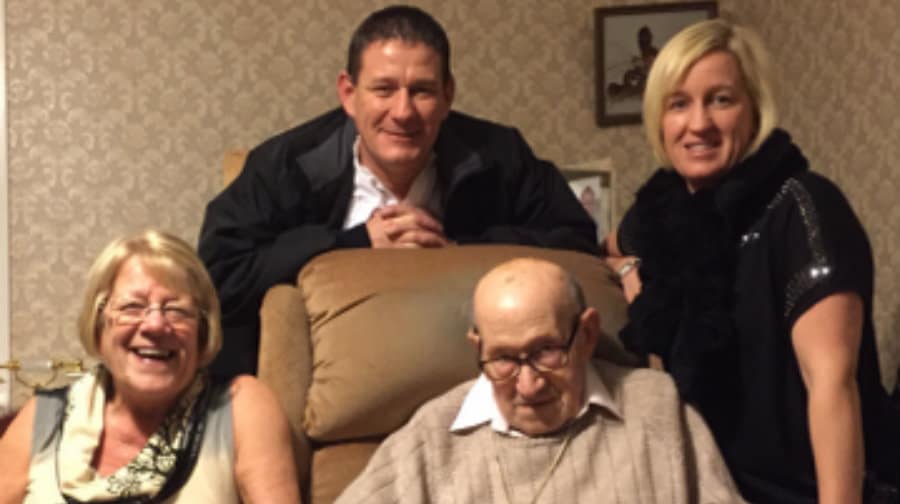 Bert with daughter Susan, and grand-children Neil and Stacey

A Bermondsey man who spent years as a prisoner of war during WW2 celebrated his 100th birthday last Saturday.

Susan Brunsdon, his only child, told the News that even after all these years he still had a “brilliant sense of humour.”

She said: “He is quite with it, he remembers things and he’s got a brilliant sense of humour. He’s got good days and bad days – but don’t we all!”

Bert’s party took place exactly 70 years after he was freed from a Nazi prisoner camp, following his capture while serving in North Africa during WW2.

Susan said: “First he was brought across by boat to the bottom of Italy. They then had to march the entire length of Italy before being brought to the camp in Czechoslovakia.

“He never really talks about it much, and doesn’t go to any of the Remembrance events, although he does watch them on television.

“One time I was watching Hogan’s Heroes and asked him if it was like that. He laughed and said it was and it wasn’t. He said there were funny times in the camp, but also not so funny times.”

Even before being captured, Bert’s time in the army was eventful to say the least. In 1940, his wedding was cancelled at the last minute after he was refused leave from the army.

Susan said: “They were all set to get married but then he never turned up! In the end the vicar wrote to the padre [military chaplain] and explained the situation. He was given short-term leave and came back to get married. Then he went straight back to the war and was captured.”

His wife also called Susan, who was working at a munitions factory in Great Dover Street, received a telegram from the army saying that her husband had gone missing and was presumed dead. Soon after she received another one, which said that he had actually been taken as a prisoner of war.

When the war ended, the couple were reunited. Bert began working as an apprentice with the gas works, first in the Old Kent Road and then in Greenwich. When the plant closed and he was made redundant, Bert put his uniform back on and served as a commissionaire, attending the entrance of the solicitors used by the Royal Family.

Bert retired in 1985, and lost his wife four years later. He has spent his whole life, apart from his WW2 travels, living in Bermondsey, in the Old Kent Road, Tower Bridge Road and Abbey Street – where he still lives in a flat by himself, even going into his 101st year.

Susan explained: “He is not one to make a fuss.”