102 years of the one and only Arments pie and mash

A song and dance from the Bermondsey Pearly King and Queen marked the occasion, with funds raised for Homes for Heroes 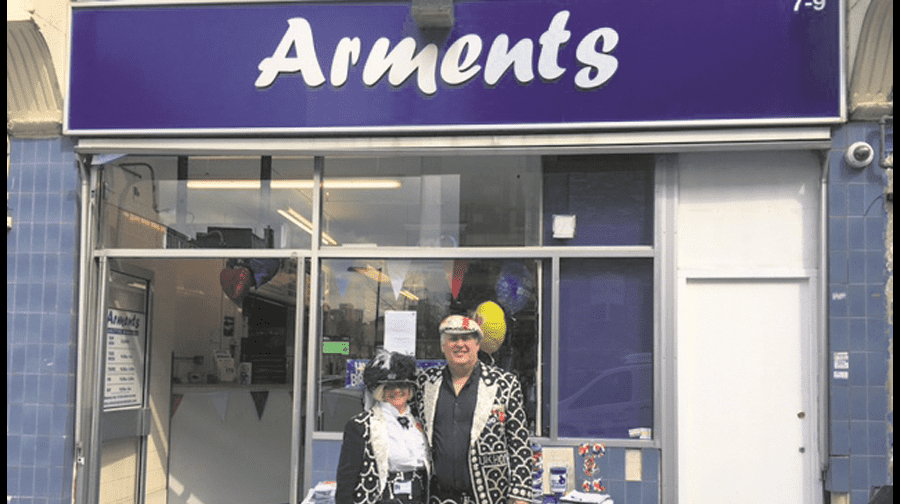 Arments pie and mash shop celebrated 102 years of feeding the community on April 14 with decorations and a stall for Homes for Heroes.

The institution has been a staple of local diets since 1914 and was started by Emily and William Arment at 386 Walworth Road at the outbreak of World War One.

The shop moved to its current location of 7-9 Westmoreland Road in 1979 as the business grew and is now run by third generation Arments Roy and Cheryl.

Cheryl said: “We are part of the community. It is not really ours it’s our customers’. They always say ‘don’t change our shop’ and that’s why we try to fill it with lots of nostalgia.

“Even people who move away make sure they do a little pilgrimage here when they are on holiday.

“We’ve started sending our pies to all over parts of the country too, including as far as Jersey. We’ve surprisingly even got a following in Germany after one of their TV channels did a piece about Elephant and Castle.”

A Pearly King and Queen helped mark the occasion by setting up a stall outside the shop to raise money for charity.

Jimmy Jukes MBE, the Pearly King of Bermondsey and Camberwell, said: “This place really means a lot to me and I’ve been coming here since I was in a pram.

“It is like a little Mecca to us. It’s a special place and it’s great it’s still going. Once they go they never come back.”

Michelle Thorpe, the Pearly Queen of Rotherhithe, said: “They do a lot for the community that doesn’t get as much recognition as they deserve.”

Arments is one of two famous pie and mash shops in London, enjoying a friendly rivalry with Manze’s of Tower Bridge Road.

The shop celebrated its centenary in 2014 with a big party attended by a Del Boy impersonator and Labour MP Harriet Harmon, to whom he is said to have tried to sell a watch.

The pie place has also enjoyed roles on TV featuring in a documentary about the Maccabees and the people who live around Elephant and Castle called Elephant Days, as well in a Danny Dyer series.

In recognition of Arments’s place in the community, they received a Blue Plaque in 2013 and had a building named after them as Arments Court on the new Aylesbury Estate.