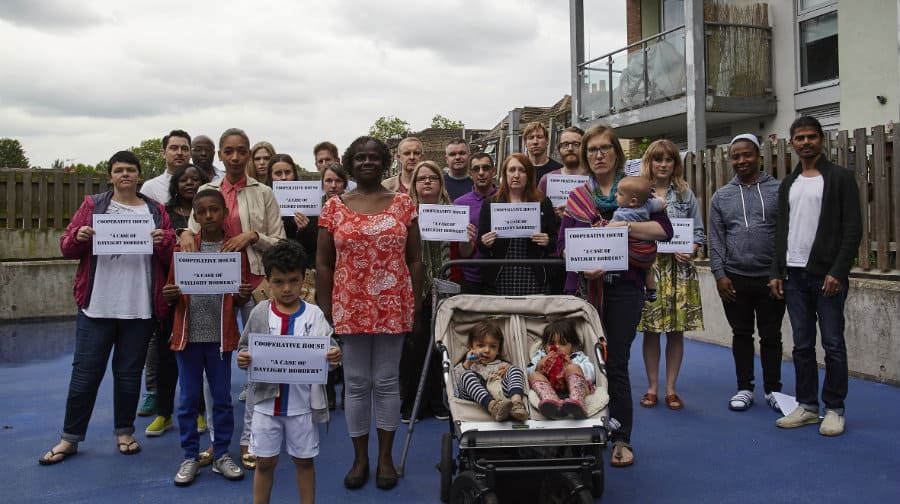 Families living on a Rye Lane housing estate say they have been “misled” by developers proposing new blocks of flats, which have also drawn criticism for not including any affordable homes.

Developers, The Third Quarter, submitted a planning application on May 13 to demolish commercial buildings at 269 Rye Lane, and build three towers up to six storeys tall with 30 new flats.

The company hired another company, Curtin&Co, to carry out its public consultations by canvassing local residents. But a mum from the Cooperative House next door said her community was led to believe there would only be one building, and that the real proposal will “rob them of sunlight”.

Michelle Delgado, 49, said: “We only found out that it’s for three buildings from reading the planning applications documents. None of it was mentioned in the consultation they showed us when they knocked on our doors.

“The new proposal will mean the lovely little kids’ play area we have behind the shops on Rye Lane will be completely surrounded and not have any sun light.

One of Michelle’s other big concerns was the lack of parking for Rye Lane, as well as for the many other housing developments that are set to take off in the area.

“What are people supposed to do in any of these new flats if they want a delivery, or if emergency services vehicles need to get in, or if any of the residents are disabled and need a car,” she said.

Michelle also said she would be putting a deputation to the next community council meeting, where she would ask councillors to ensure residents’ views were not “misrepresented”.  More than 21 other locals have lodged objections to the council’s website, indicating more of a negative reaction than was suggested by the results of the developer’s consultations.

Local campaign group Peckham Vision has also slammed the proposals for not including any ‘affordable’ homes: which the last Mayor of London defined as being rented at 80 per cent or lower than the market average.

Southwark Council also has a planning policy requiring most large-scale developments to provide 35 per cent of homes at ‘affordable’ rates, unless they can improve that doing so would make a development financially unviable.

However Third Quarter has conceded that even though it could afford to provide cheaper homes it is not obliged due to a snag in the council’s planning policy, which does not require it to because the residual land value is below a certain benchmark. They are going to discuss the issue with Southwark Council.

Eileen Conn, coordinator of Peckham Vision, said: “We are deeply concerned at the over development proposed in several current planning applications in Peckham town centre, and the lack of affordable housing, and the poor quality design.

“We support the residents in Coop House, next door to this site, in their efforts to get a public meeting with the developers and the council.”

David Shetcliffe of Curtin&Co, who were commissioned by planning agents Londonewcastle to carry out public consultations, said: “From the outset, the development managers have actively engaged with local residents and the community.

“Londonewcastle has gone above and beyond the routine engagement activities by proactively asking local people their views on the proposed scheme. A three day canvassing session, speaking to people on the doorstep was undertaken. Prior to the canvassing sessions, letters were sent to local businesses and residents informing them that the canvassing would take place. Contact details of members of the project team were provided to allow any interested residents to get in touch with directly. In addition, Londonewcastle and the project team actively engaged with local community representatives prior to a planning application being submitted.

“Londonewcastle is committed to bringing forward a development which includes high-quality architecture designs by award winning architect, Christopher Egret, who has previously received design awards for his work on Peckham Library. Londonewcastle, understands how important it is bringing forward high quality designs which the local community can be proud of. The scheme offers significant community benefits. The proposals include much-needed employment space which will support local jobs and local businesses. The development will encourage investment to a currently largely derelict site and regenerate the street frontage.”

Southwark NewsNewsRye Lane residents say new apartment blocks will put them in the dark, and question levels of affordable housing