THEY JUST BURGERED OFF! Residents hit out at partygoers who left litter strewn across park – including a still cooking BBQ 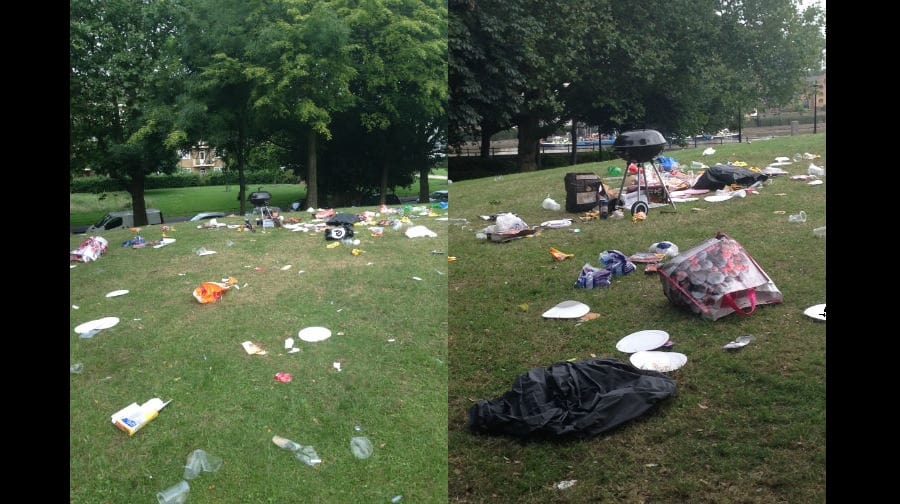 Residents have hit out at litterbugs who left a Bermondsey park covered in rubbish, including a BBQ full of food, which was still cooking.

Bemused walkers and sunbathers in King’s Stairs Gardens stumbled upon the meat feast atop a still lit barbeque, surrounding by heaps of rubbish and empty beer crates. The pop-up chefs are said to have been playing loud music while they enjoyed their drinks too.

Malcolm Balen, who found the leftovers, told the News: “The BBQ was still smoking and the sausages were still cooking!

“BBQs are apparently popping up more and more. The site was cleared by Quadron later that morning. Although you can’t see it in the pictures, there was a fair scattering of cream chargers on the ground, as used with balloons to get a legal high.

“We were out but apparently there was a loud music system going. They obviously took that with them, unlike the barbecue.”

Gary Glover, of Friends of Southwark Park, said that a little bit of education would help with tackling the litterbugs.

He said: “We haven’t had such an issue in Southwark Park with litter pickups happening twice a day, but the way those people left the garden was terrible and out of order.

“It was disgusting the way they treated it.

“I think the wardens when they are on duty should hand out leaflets telling people to clean up after themselves.”

He added:?“The little disposable barbeques can sit on the ground and burn the grass, so it wouldn’t be bad to hand out some leaflets for some education.”

Southwark NewsNewsTHEY JUST BURGERED OFF! Residents hit out at partygoers who left litter strewn across park – including a still cooking BBQ