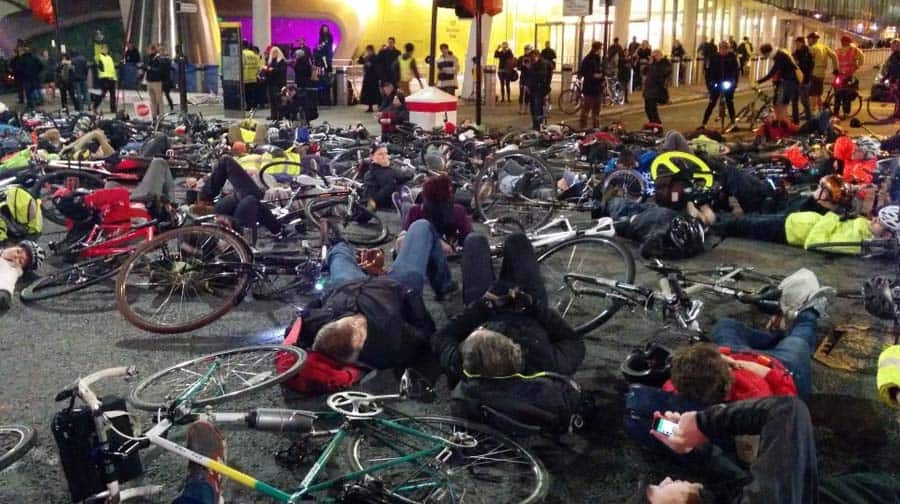 Cyclists lie across the road in the protest. Photo: Andrew Reeves-Hall

Blackfriars Road was brought to a standstill last week as around 150 cyclists blocked the street as part of a “die-in” protest.

In an effort to raise awareness about cyclist safety, the campaigners lay down on the road with their bikes at 5pm on November 27.

Twenty-one cardboard coffins were lined up during the stunt, representing the 21 cyclists who have died on the city’s streets since November 2013, a deadly month in which six cyclists were tragically killed.

Four cyclists have died on Southwark’s roads since that time – most recently Esther Hartsilver, who was crushed to death by a lorry while cycling along Denmark Hill this May.

Donnachadh McCarthy, of Stop Killing Cyclists campaign group, told the News: “The die-in went very well. The cars that were blocked were respectful and it was silent – a very rare thing in central London. “We had media coverage from all across Britain and the world. One journalist even came all the way from Japan to cover it. This is a big issue.”

The protest took place directly outside the headquarters for Transport for London, whom Donnachadh said should put more of their budget towards cycling.

He said: “Ten per cent of the TfL budget must be allocated to cycling infrastructure by 2020. The current pathetic 1.4 per cent of the budget being spent on cycling safety is an insult to those dying from collisions, pollution and inactivity diseases and the tens of thousands of Londoners living every day with terrible health impacts.”

A large tombstone was also unveiled at the protest, symbolising the 24,000 people who the group said have died since 2013 due to diseases related to pollution or inactivity.

Donnachadh said: “The cyclist deaths are just the canary in the mine shaft: 9000 people die due transport-related pollution each year, with another 3,000 dying due to inactivity-related diseases. Everybody benefits if more focus is put on cycling.”

Leon Daniels, Managing Director of Surface Transport at TfL, said: “We are investing nearly £1 billion in upgrading the existing Cycle Superhighways with greater segregation, introducing major new segregated cycle routes and backstreet quiet routes, and overhauling dozens of junctions both on our roads and on borough roads, to give more protection to pedestrians and cyclists.”