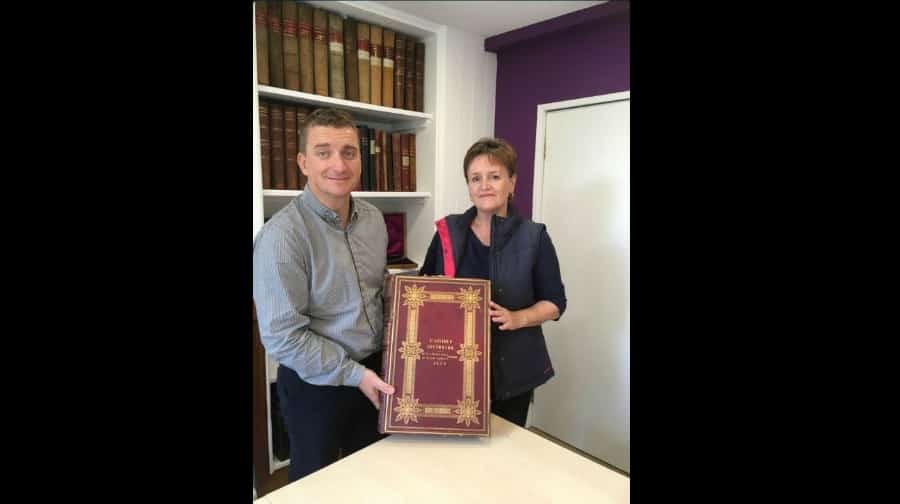 A 157-year-old leather-bound Bible has been returned to Bermondsey’s United St Saviour’s Charity, after the daughter of a late former clerk found it among his belongings.

The large Bible was found by Sarah Jackson as she went through her late father’s possessions in Devon, and reached out to the charity to see if they would like it.

Martyn Craddock, Chief Executive of United St Saviour’s Charity, said: “Her father was called Forbes Melville and he was clerk to the Corporation of Wardens of the Parish of St Saviour’s right up until 1992.

“I don’t know how long he was clerk for. Sarah thinks that the Bible came from the church from our almshouses in Norwood.

“So she said ‘would you like it’ and we said come in and she gave it to us! It’s lovely and old and huge. The only thing I can think of in terms of the date is that it’s the time the Norwood almshouse opened because they moved from Borough Market.

“They built the viaducts in Borough Market and had to demolish the almshouses. We have a service once a year where we like to commemorate the people who founded our almshouses. It would be nice to use it then!”

United St Saviour’s Charity was founded in 1540 during the reign of Henry VI as the Guild of the Fraternity of the Blesses Virgin Mary, and was later incorporated under Henry VIII to manage parish affairs and local charities for the people of Bermondsey.