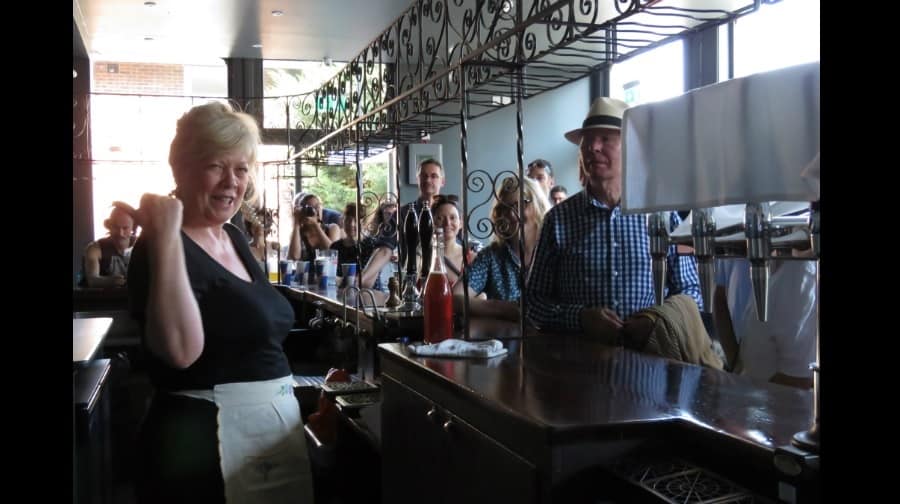 A scene from the Walworth Society's animated history tour of East Street, which offered a sneak peek of the pub on July 23

A Walworth boozer with over 160 years of history will reopen today with the aim of repositioning itself as a pub for the people.

The Huntsman and Hounds closed in 2014, but has been given a new lease of life thanks to a Bromley-based family pub businesses and the Walworth Society.

Like many pubs of the past, The Huntsman in Elsted Street was sold for redevelopment into flats. But a strong local campaign convinced its developer to retain its newly-refurbished ground floor.

John Whelan of the Walworth Society took a guided a tour of the East Street area’s history for a sneak peek of The Huntsman on July 23. He told the News: “There’s going to be a lot of old photos on the walls of the costermongers [market traders] from East Street.

“It was a strong focal point for the East Street traders and the pub would be a place for wedding receptions and socialising between them.

“The pub was famous for its darts as well. There were five teams that practiced there and two darts boards.

“It was also a place for kids and dads to meet before going for a Beano – the old word for going on a day out to the beach, or to the horse racing or the dogs. The kids would come from far and wide and the people at the pub would chuck them a few bob before they left.

“The current site was laid out between 1850 and 1876, but it changed shape in that time, there was a stables at one point. It also had a forbearer of the same name in the old Walworth Common.”

The Horseman and Hounds

John, 44, a theatre director by trade, said the Walworth Society campaigned to get the pub recognised as a community asset.

“For a lot of people, this pub was the community’s lynch pin. To a lot of people it was really horrific to watch it close. It was a real social network.”

In its recent past the Huntsman would have been a place for old widows to come and have Christmas dinner together, and the locals would make sure they get walked home safely in the cold.

In its latest incarnation, the Huntsman promises to offer real ales and be a place that employs local people.

Peter Birdsall, whose family businesses have taken The Huntsman’s reins, said: “I went along to the Walworth Society’s meetings and we were really interested to hear they wanted a family pub, so we convinced the landlord to let us have a lease for a few years.

“Being a freehouse means we can have a different selection of craft beers and ales. We will have speciality gins and vodkas and interesting teas and coffees.

“We will also have a book exchange and keep some board games too.”

Hope it makes a go of it!